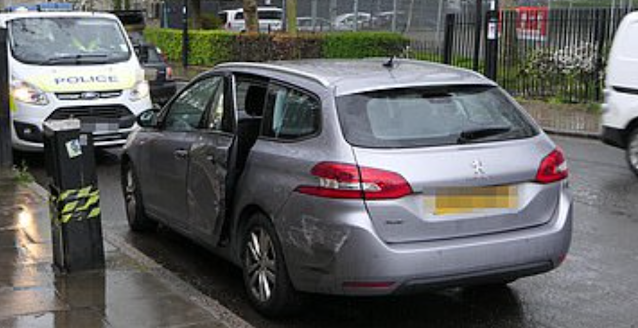 Hit-and-run driver is hunted by police for mowing down officer who is rushed to hospital after being struck as he stood next to patrol car.
Police are hunting a hit-and-run driver who mowed down an officer as he stood next to an undercover patrol car in London. Emergency services were called just before 3pm today to the scene of the collision at Darmouth Park Hill in Camden. The officer, who had been standing outside of a stationary police vehicle at the time of the crash, was rushed to hospital after suffering injuries to his lower body. Police at the scene believe the incident to be deliberate. The police car was also damaged in the crash, while the driver of the suspect vehicle did not stop at the scene. Enquiries are underway to trace both the driver and the vehicle. A Metropolitan Police spokesman said: 'The injured officer was taken to hospital by LAS. We await an update on the officer’s condition. 'A crime scene remains in place. 'Anyone who witnessed this incident or has dash-cam/moving footage should call police on 101 or Tweet @MetCC quoting 4030/15APR. 'To remain 100% anonymous call Crimestoppers on 0800 555 111 or visit Crimestoppers_uk.org.' Source
Email Post