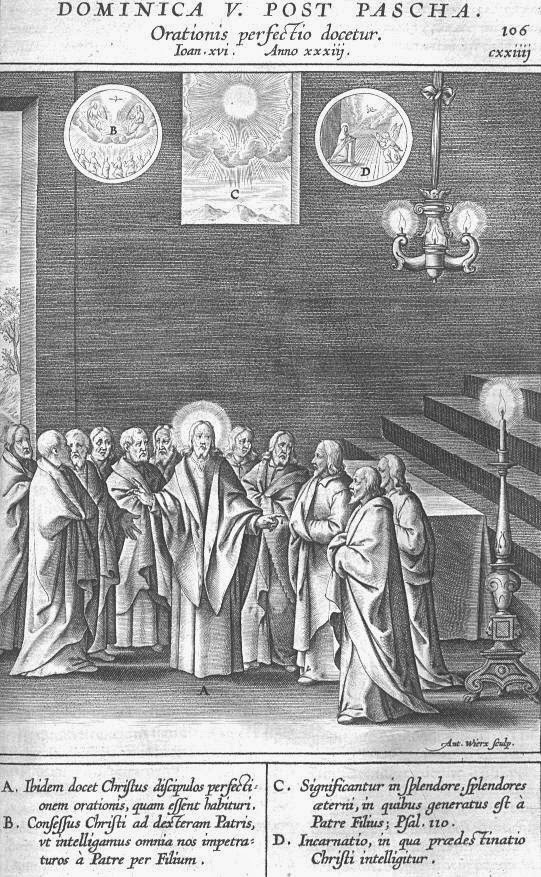 GOSPEL
Jn. 16:23-30
At that time Jesus saith to His disciples: "Amen, amen, I say to you: if you ask the Father any thing in My Name, He will give it to you. Hitherto you have not asked any thing in my name: Ask, and you shall receive, that your joy may be full. These things I have spoken to you in proverbs. The hour cometh when I will no more speak to you in proverbs, but I will show you plainly of the Father. In that day you shall ask in My Name; and I say not to you that I will ask the Father for you: for the Father Himself loveth you, because you have loved Me and have believed that I came out from God. I came forth from the Father and am come into the world; again I leave the world and I go to the Father." His disciples say to Him: Behold, now Thou speakest plainly and speakest no proverb. Now we know that Thou knowest all things and Thou needest not that any man should ask of Thee: by this we believe that Thou camest forth from God.

Prayer being so necessary unto us, and so great a benefit, and we not knowing what to pray for, as we ought, as St. Paul sayeth: it was necessary we should have a form or method of prayer, set down, by one of skill.

This benefit also did Christ for us in the Gospel, where it is said, that when his disciples came to him and desired him to teach them to pray, as St. John the baptist did his disciples, as he said unto them: When you pray thus, to wit: Our Father which art in heaven &c. which we call, either the Pater noster, because it beginneth with Pater noster in Latin,which signifieth Our Father, or our Lords prayer, because Christ our Lord first taught it his disciples.

This prayer consists of seven petitions; & as all times are reduced into weeks, and measured thereby, consisting of the number of seven, to wit, seven days, the heavens under the starry firmament by which the whole fabric of world is governed, are seven. The planets whereof the inferior creatures are engendered especially of the sun and moon, are seven. The things that man consist of, are seven, to wit, the four elements for his body, earth, air, fire, and water; and three faculties of his soul, understanding,will, and memory: the principal virtues, seven; four moral, justice, prudence, fortitude, temperance, & three Theological, Faith, Hope,and Charity. The gifts of the holy Ghost seven whereby a man is perfected, wisdom, understanding, counsel, fortitude, knowledge, piety, and fear of our Lord. The works of mercy corporal towards our neighbor, seven: To give food to the hungry, drink to the thirsty, to harbor pilgrims and travelers, to cloth the naked, to visit the sick, to go to them that are in prison, and to redeem captives, especially such as are in prison for professing Catholic faith, to bury the dead.  The works of mercy spiritual seven: To teach and instruct the ignorant; to correct and convert the sinner; to help him that needeth with good counsel; to comfort the afflicted; to bear injuries patiently; to forgive our offenders; to pray for the living and dead, and for our persecutors. The Sacraments, which like rain from heaven maketh the field of Gods Church fertile & fruitful, seven: Baptism, Confirmation, Penance, the holy Eucharist, holy Orders, Matrimony, and extreme Unction. The dowries wherewithal we are glorified in Paradise, seven; three of the soul, beatific vision, possession, fruition; four of the body, agility or swiftness, impassibility, splendor or brightness, immortality.

This number of seven in all these import a complete total sum of all things necessary in their several kinds. So do the seven petitions of our Lords prayer contain a complete and total sum of all we need to ask in prayer, whereby we may gather, it is a mystical number,which being instituted by Christ, promiseth some secret virtue, and operation more then other prayers, to issue out of them to the sayers thereof, as there did out of the hem of our Saviours garment, to the woman of Chanaan; of which prayer more particularly in the next meditation.