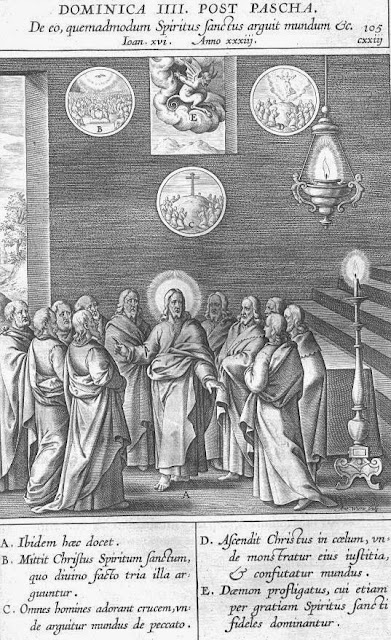 GOSPEL John 16. 5-14.
At that time Jesus said to His disciples: I go to Him that sent Me: and none of you asketh Me: Whither goest Thou? But because I have spoken these things to you, sorrow hath filled your heart. But I tell you the truth: it is expedient to you that I go: for if I go not, the Paraclete will not come to you: but if I go, I will send Him to you. And when He is come, He will convince the world of sin, and of justice and of judgment. Of sin, because they believed not in Me: and of justice, because I go to the Father, and you shall see Me no longer: and of judgment, because the prince of this world is already judged. I have yet many things to say to you; but you cannot bear them now. But when He, the Spirit of truth, is come, He will teach you all truth. For He shall not speak of Himself: but what things soever He shall hear He shall speak, and the things that are to come, He shall show you. He shall glorify Me: because He shall receive of Mine and shall show it to you.
WEDNESDAY

Unless I depart from you the holy Ghost the comforter cannot come unto you.

O Thou infinite goodness, & innocency my Saviour Jesu Christ, is there such opposition between thee and the holy Ghost, who is also goodness by nature and essence, that you cannot be together? Must thou needs depart because he comes?  The reason is this: As the breast-milk is so sweet & natural to a sucking child, that when a nurse would ween her child & have him fall to stronger food, he is so delighted therewith, that unless the teat be quite taken from him, he will fall to no other food, but that being taken from him, he will.

Our Saviour Christ both in person and condition,was the fairest amongst the sons of men and (as it was said of Titus an Emperor of Rome,but more truly a thousands times of him then of Titus) the deliciousness of men,having all perfections in him,in the highest degree, that might incite unto love. He was most liberal, most loving, most humble,most gracious in his speech, according to that of the Prophet David, Grace (or gtracefullness) was as it were poured forth in his lips,that is to say in his speech: his aspect or countenance was such, as might draw a mans love as a load-stone draweth iron, in so much that when one Porphirius a great scholar,but an enemy to Christianity,had read in the Gospels that some of the Apostles upon one bare bidding of Christ to follow him, as that were a fishing left their nets suddenly, and followed him, took occasion thereby to discredit the Gospel, saying ,it was too foolish an action to believe it to be true.  St Jerome after other arguments against him said: And why may there not be such an attractive virtue,& lovely beauty, in the countenance and aspect of Christ to draw men after him,as God hath given to the load-stone to draw iron unto it, or the jet stone little straws? By this means therefore the conversation of Christ was so sweet to his disciples,that whereas they & the succeeding Church unto the worlds end was to be taught, directed and comforted by the invisible grace and gifts of the holy Ghost,by Sacraments, and the like, that they might still lift up their eyes unto the mountains, that is to say,to the heavens from whence their aid came, they were so delighted with the sweet milk of the corporal presence and conversation of Christ, and of his comforts, that they would never have fallen to that they would never have fallen to that stronger food Christ had departed from them, & therefore he said unto them, unless I go away, the holy Ghost cannot come unto you.

So it is with us when we are over much in love with anything of this world, it hindereth the love of God, and the coming or infusion of the grace of the holy Ghost into our souls, till it be taken from us.  All which worldly things when we love them over much, God if he loveth us, will take from us, least we should love him the less, & if he doth not take them from us quite, yet as a nurse, to make her child forebear the teat,and fall to other food, anointed it with bitter Aloes, wormwood, or the like, so doth God anointed those worldly things we love overmuch, with the bitterness of some cross or other; and if he doth neither of these, it is no good sign of his love.  Wherefore when any such cross happeneth unto us, let us not suffer our selves to be so oppressed with sorrow,as the disciples were, at their Masters departure, that they could not so much as remember to ask him whither we went? Let us, I say not suffer our selves to be so much oppressed and swallowed up with sorrow, but that we may remember to ask our selves, why it is, and we shall find it is, because unless these things be quite taken from us, or anointed with the bitter Aloes of adversity, the holy Ghost cannot come into our souls.