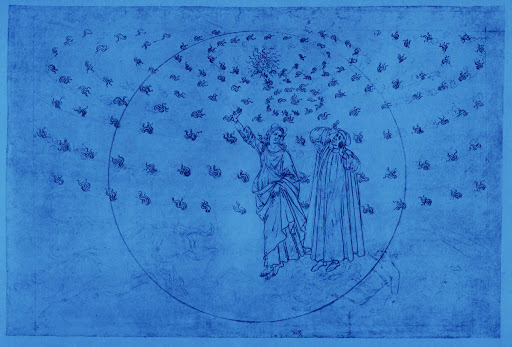 Dante and Beatrice in Fixed Stars in the constellation of Gemini, Dante's birth stars.
The Divine Poet was born on this day May 30th, 1265 in Florence Italy. Dante was Baptised on March 26th, 1266 in the Baptistery of San Giovanni.
O stars of glory, constellation steeped
in mighty force, all of my genius-
whatever be its worth-has you as source:
with you was born and under you was hidden
he who is father of all mortal lives,
when I first felt the air of Tuscany;
and then, when grace was granted me to enter
the high wheel that impels your revolutions,
your region was my fated point of entry.
To you my soul now sighs devotedly,
that it may gain the force for this attempt,
hard trial that now demands its every strength.
Paradiso xxii
The constellation chosen for Dante's entry into the sphere of the Fixed Stars is Gemini, the stars under which he was born (between May 21 and June 21, 1265) and to whose powers he attributes his talent (Par. 22.112-20). Gemini, meaning "twins," takes its name from the twin brothers, Castor and Pollux. Leda, wife of King Tyndareus of Sparta, was impregnated by Jupiter (in the form of a swan) and gave birth to the twins. Pollux was celebrated as a boxer, while Castor earned renown as a horseman. According to some versions, Pollux, fathered by Jupiter, was immortal but Castor, fathered by Tyndareus, was not, even though both brothers "hatched" from the same egg. When Castor was slain in battle, Pollux pleaded with his divine father that Castor be allowed to share his brother's immortality: Jupiter obliged by placing them in the heavens as the Gemini, the brightest stars of the constellation (Ovid, Fasti 5.699-720). Based on this mythology, Dante refers to the constellation as "Leda's lovely nest" (Par. 27.98). Dantesworld
"Contingency, that outside of the volume
Of your materiality extends not,
Is all depicted in the eternal aspect.
Necessity however thence it takes not,
Except as from the eye, in which 'tis mirrored,
A ship that with the current down descends.
From thence, e'en as there cometh to the ear
Sweet harmony from an organ, comes in sight
To me the time that is preparing for thee.
As forth from Athens went Hippolytus,
By reason of his step-dame false and cruel,
So thou from Florence must perforce depart.
Already this is willed, and this is sought for;
And soon it shall be done by him who thinks it,
Where every day the Christ is bought and sold.
The blame shall follow the offended party
In outcry as is usual; but the vengeance
Shall witness to the truth that doth dispense it.
Thou shalt abandon everything beloved
Most tenderly, and this the arrow is
Which first the bow of banishment shoots forth.
Thou shalt have proof how savoureth of salt
The bread of others, and how hard a road
The going down and up another's stairs.
And that which most shall weigh upon thy shoulders
Will be the bad and foolish company
With which into this valley thou shalt fall;
For all ingrate, all mad and impious
Will they become against thee; but soon after
They, and not thou, shall have the forehead scarlet
Of their bestiality their own proceedings
Shall furnish proof; so 'twill be well for thee
A party to have made thee by thyself.
Paradiso xvii
Email Post