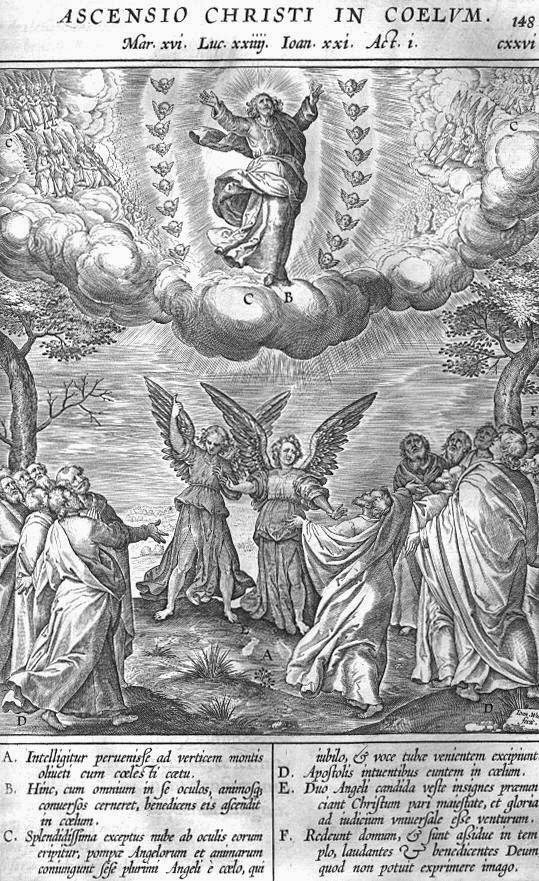 
The disciples of Christ took so great joy of his presence that unless he went from them, they were not fit to receive the holy Ghost,because all their affection was set upon him, and desired no other happiness then to live here on earth with him. Christ at his departure from them, by his death left them so much the more afflicted: At his resurrection so much the more comforted again: At his Ascension afflicted as before : At the coming of the holy Ghost, the Paraclete, that is to say the comforter (for so Paraclete signify) comforted again, as much or more, and generally all the joys and pleasures of this world, are uncertain,and variable in their course.

Of which the good old man Job, by experience could say: A man that is born of a woman, is replenished with many miseries,and never remaineth in one state, but sometimes in health, sometimes sick, sometimes in prosperity, sometimes in adverisity, sometimes merry, sometimes sorry, and the like. The same Job sayth in another place to his wife and children in his affliction to comfort them: If we have received good things from Lord, why should we not sustain ill? As if we could expect nothing else in this life, but good and bad fortunes, one amongst another. Against these varieties of fortunes he telleth us in another place, that our life is a warfare, & that we must fight it out, if we will overcome.

When the people of Israel upon a certain time were in great affliction and distress by reason of war, they cried unto God for help and he raised them a Savior, a valiant man called Aod: This man as the Scripture sayth, amongst other commendations of him, could fight with both hands, with one as well as with another. Prosperity is compared in the scripture to the right hand, adversity to the left. This fight is so hard, that the Prophet David said of both, especially against prosperity: That there shall fall at the left hand to wit adversity, a thousand, and at the right hand, to wit prosperity, ten thousand.

And this fight with either of them is so fearful, that wise Solomon was so afraid thereof, that when God had promised him to give him what he would ask, he asked God to give him neither penury, nor plenty,but only necessaries & no more: not plenty, least it should make him to forget God, nor penury least it should make him steal, and forswear himself, murmur against God,and the like.

Although we are not to be so presumptuous as to ask God prosperity, or adversity,but rather as Solomon did, a competent means,as the safer state:yet to be in prosperity or adversity, if we carry ourselves, more glorious to God, and edificatory to his church, Of St.Paul said thus of himself: I have learned and do know to be humbled, and I know to abound (being every where & in every thing instructed) to be satiated and to be hungry, to abound and suffer penury. In which words he seemed to glory that he was well composed, and thought it a matter of edification to leave it written to all prosperity, as he might well enough. Wherefore let us demand this grace of our heavenly Father in the name and merits of his well beloved Son Christ Jesus,who teacheth,as the Prophet David sayth, our hands to war, and our fingers to fight: and Christ hath promised us, he will grant our request.