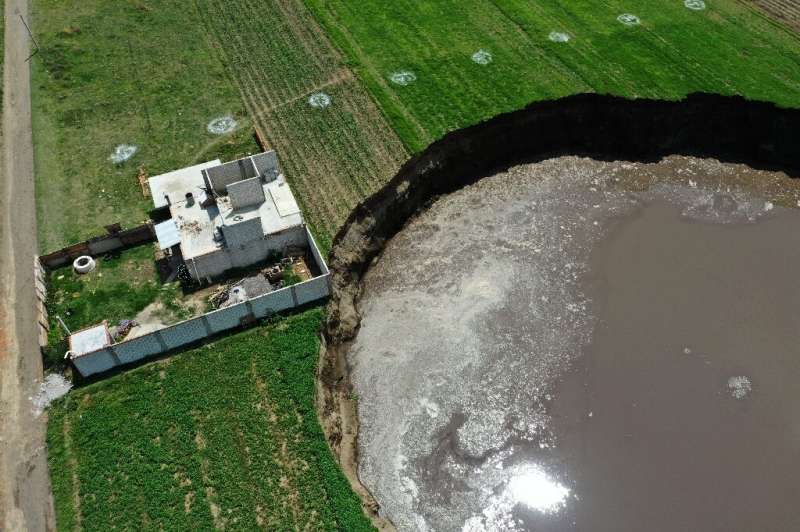 Huge Sinkhole Threatens To Swallow Mexican Home
A giant sinkhole that was expanding by dozens of meters each day has alarmed residents in a rural area of central Mexico where it was threatening to swallow a house. When the Sanchez family heard a loud crash on Saturday they first thought that it was a lightning strike. But they soon discovered that the ground had collapsed just meters from their home in a field in Santa Maria Zacatepec in the state of Puebla. The hole, which is full of water, was about 30 meters (nearly 100 feet) wide by Sunday. It rapidly grew to 60 meters on Monday and around 80 meters on Tuesday, the authorities said, coming perilously close to the house of the Sanchez family, who fear they will be left homeless. "We have nothing. We're not from here. We have no relatives. We're alone," Heriberto Sanchez, originally from the southeastern state of Veracruz, told the media. Scientists and the authorities were considering hypotheses including a geological fault or variations in the soil's water content as the possible causes. As the sinkhole has grown, large chunks of earth continually have broken away from the rim, scaring off onlookers approaching a security cordon set up by the authorities. In a video posted on social media, two men were seen approaching the hole shortly before it expanded suddenly, forcing them to run to safety. "It will grow until nature decides, when the water stops exerting pressure," Puebla state governor Miguel Barbosa said. "The important thing now is public safety," he said, adding that the authorities would compensate those affected. Source
PROPHECY OF MELANIE ON TWO POPES:
"I didn't see, I don't see any Great Pope or Great Monarch before an extremely great tribulation, horrifying, terrible and general for all Christendom. But before that time, twice there will be a short lived peace; TWO shaky, servile, doubtful popes" Mélanie