Sunday Within The Octaves Of Corpus Christi Day Which Is Accounted The Second Sunday After Pentecost The Gospel Luc.14.v.16 Thursday Meditation: A Plaine Path-way To Heaven Thomas Hill 1634 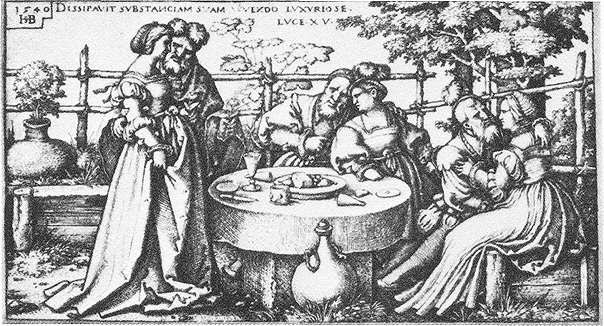 Coming to this great supper with these dispositions, no doubt,our entertainment will be answerable unto it,and far surpassing. I know not how to describe it better, then by another Parable in the Gospel, of a Father and his prodigal Son. This Father, when his son would needs have his portion, & go (as the phrase is) to seek his fortune; in seeking his fortune he lost all his fortunes riotously, and was driven to that necessity, that being beaten sorely with his own rod, he was fain to return home to his Father with shame enough,and submit himself: being returned home his Father understanding of his approach, went forth joyfully to meet him, and meeting him, fell upon his neck, and kissed him, clothed him with the best garment he had, put shoes upon his feet,and a ring upon his finger, carried him into the house, caused a fat calf to be killed, to make him eat,& music to make merry with him. This is the Parable.

Shall we think that this exact parable set out so lively by our Saviour Christ himself (for he proposed it as St.Luke telleth us,) was without mystery, or rather not full of mystery? The spiritual application of it is this: The prodigal Son is every one, that having digressed and gone astray from his heavenly Father (as we all do more or less) and hath a mind to return to his heavenly Father again, his heavenly Father knowing thereof, who knoweth all things, and being joyful thereat, as all the whole Court of heaven are at the conversion of a sinner, meeteth him upon the way with his concomitant, or following, grace, whom with his precedent grace he had drawn thither, & embraceth him with the arms of his love, giving him a kiss of peace, and rest from the labors of his former vain conversation, clothed him with a fair long garment of contrition, putteth on shoes of heavenly love upon the feet of his affections, that he hurt them not with going barefoot upon the briers and brambles of worldly delights (neither let any man wonder, that I call worldly delights briers and brambles, when Christ calleth them so) he putteth a ring upon his finger, as if he were new married unto him again in firm stability, that he go astray no more. He fetcheth him into his great dinning Chamber, to wit the Church of Temple of God, there he feasteth him with the fatted calf, the Blessed Sacrament of the Altar, which being full of all manner of grace, as it were, in the fountain itself, fatteth his soul with grace and fortitude, and maketh him music of spiritual joy, and consolation in his soul far surpassing all other joys.

Behold thus shall everyone be entertained, that maketh no vain worldly excuses of oxen, farm, wife or the like, but commeth to this feast of the Blessed Sacrament with such preparation as is aforesaid in the precedent Meditation, especially if they be not to long away; for though corporal food, the more and oftener we eat, the more it dulleth our appetite and taketh away the sweetness thereof: yet with this, of the Blessed Sacrament, and other spiritual food, it is quite contrary, the more feed of it, the more we may, and the less we do, the less we may.