Philippines plane crash kills 45 including three civilians on the ground as search continues for unaccounted military personnel after Hercules jet carrying troops crashed and burst into flames
At least 45 people have been killed and dozens injured after a Philippines Air Force plane carrying troops crashed on landing and burst into flames. The incident happened shortly before noon on Sunday in Bangkal village in the mountainous town of Patikul in the southern Sulu province, where the plane missed the runway, according to an official. Three civilians on the ground were be among the dead, according to the Armed Forces of the Philippines, who said that 42 soldiers had been killed. Forty-nine military personnel and four civilians were also injured and taken to hospital. Five members of the military are still missing. Ninety-six people had been onboard the Lockheed C-130 Hercules at the time of the crash, including three pilots who survived with serious injuries, and five crew. The rest of the passengers were military personnel. 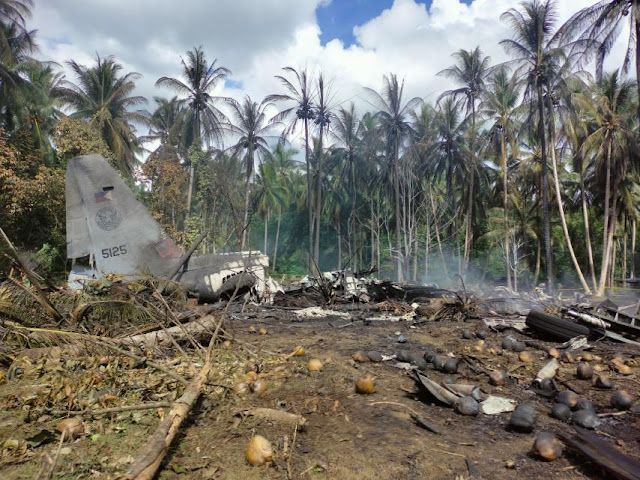 The crash is one of the country's deadliest military aviation accidents. Some of the soldiers were seen jumping out of the plane before it hit the ground and exploded into flames, Major General William Gonzales, commander of the Joint Task Force-Sulu said. 'This is a sad day but we have to remain hopeful,' Gonzales said in a statement. 'We enjoin the nation to pray for those who are injured and those who have perished in this tragedy.'The Hercules was one of two ex-U.S. Air Force aircraft handed over to the Philippines as part of military assistance this year. Military chief Cirilito Sobejana said the plane had 'missed the runway trying to regain power.' A military spokesman, Colonel Edgard Arevalo, said earlier on Sunday that there was no indication of any attack on the plane, but that a crash investigation had not begun and efforts were focussed on rescue and treatment. The crash happened in the far south of the archipelago nation where the army has been fighting a long war against Islamist militants from the Abu Sayyaf and other factions. Source
Email Post