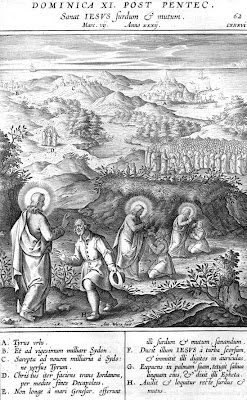 This man that was deaf & dumb, was not so born, but that the Devil had caused some impediment. somewhat that stopped his ears and tied his tongue that he could neither hear nor speak.

The ceremonies & circumstances Christ used in curing him, were these: he first took him out of the company, he cast his eyes up towards heaven, he sighed, he put his fingers into his ears, he took of his spittle and dipping his finger therein touched his tongue therewith.

Christ could have cured him, only by saying, be thou cured, as he made all the world at first, only by this word, Let it be made: it had been sufficent for him