Saturninus And Basilides Were Disciples Of Menander 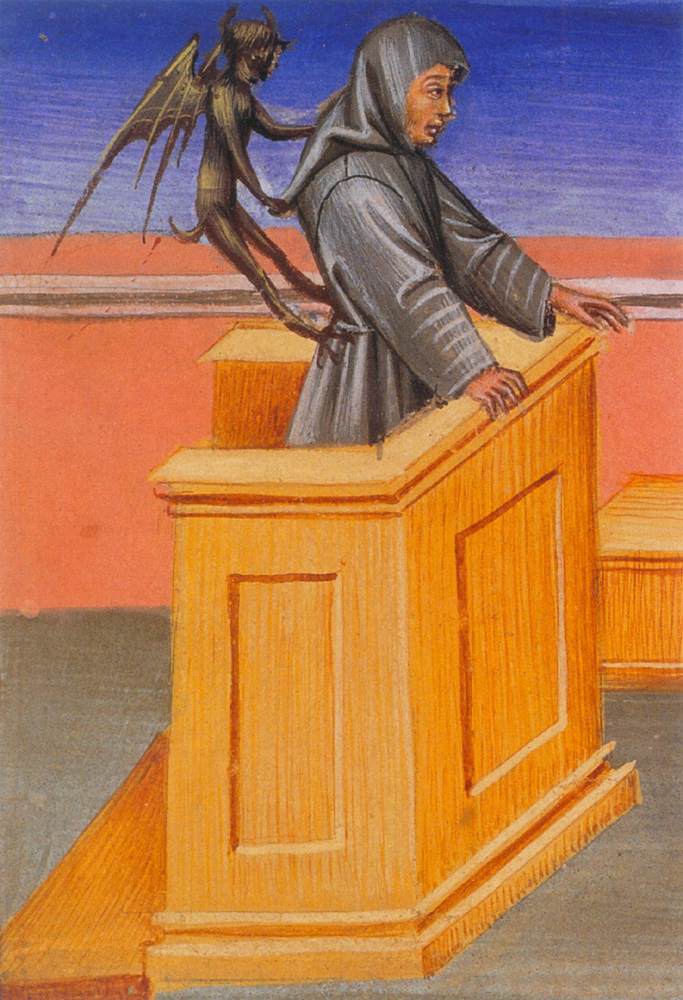 GIOVANNI DI PAOLO
Dante: Divina Commedia
1440s
5. Saturninus and Basilides were disciples of Menander, whose history we have already seen; and they made some additions to the heresy of their master. Saturninus, a native of Antioch, taught, with Menander, as Fleury tells us (10), that there was one only Father, unknown to all, who created the angels, and that seven angels created the world and man. The God of the Jews, he said, was one of these rebellious angels, and it was to destroy him that Christ appeared in the form of man, though he never had a real body. He condemned matrimony and procreation as an invention of the devil. He attributed the Prophecies partly to the angels, partly to the devil, and partly to the God of the Jews. He also said, according to St. Augustin (Heres. iii), that the Supreme Virtue that is, the Sovereign Father having created the angels, seven of them rebelled against him, created man, and for this reason: Seeing a celestial light, they wished to retain it, but it vanished from them ; and they then created man to resemble it, saying, " Let's make man to the image and likeness." Man being thus created, was like a mere worm, incapable of doing anything, till the Sovereign Virtue, pitying his image, placed in him a spark of himself, and gave him life. This is the spark which, at the dissolution of the body, flies to heaven. Those of his sect alone, he said, had this spark ; all the others were deprived of it, and, consequently, were reprobate.
Basilides, according to Fleury, was a native of Alexandria, and even exceeded Saturninus in fanaticism. He said that the Father, whom he called Abrasax, produced Nous, that is, Intelligence ; who produced Logos, or the Word ; the Word produced Phronesis, that is, Prudence ; and Prudence, Sophia and Dunamis, that is, Wisdom and Power. These created tho angels, who formed the first heaven and other angels ; and these, in their turn, produced a second heaven, and so on, till there were three hundred and sixty-five heavens produced, according to the number of days in the year. The God of the Jews, he said, was the head of the second order of angels, and because he wished to rule all nations, the other princes rose up against him, and, on that account, God sent his first-born, Nous, to free man kind from the dominion of the angels who created the world. This Nous, who, according to him, was Jesus Christ, was an incorporeal virtue, who put on whatever form pleased him. Hence, when the Jews wished to crucify him, he took the form of Simon the Cyrenean, and gave his form to Simon, so that it was Simon, and not Jesus, who was crucified. Jesus, at the same time, was laughing at the folly of the Jews, and afterwards ascended invisibly to heaven. On that account, he said, we should not venerate the crucifix, otherwise we would incur the danger of being subject to the angels who created the world. He broached many other errors ; but these are sufficient to show his fanaticism and impiety. Both Saturninus and Basilides fled from martyrdom, and always cloaked their faith with this maxim " Know others, but let no one know you." Cardinal Orsi says (11) they practised magic, and were addicted to every species of incontinence, but that they were careful in avoiding observation. They promulgated their doctrines before Menander, in the year 125; but, because they were disciples of his, we have mentioned them after him
.
(10) Fleury, n. 19. loc. cit. n, 42. [N.B Fieury puts Ebion first, next Cerinthus, and lastly Mcnanier,]
(11) Orsi, t. 2, I. 3, n. 23.
CHAPTER I
HERESIES OF THE FIRST CENTURY.
1. Simon Magus.
2. Menander.
3. Cerintlms.
4. Ebion.
5. Saturninus and Basilides.
6. The Nicholites.
The History of Heresies and Their Refutation by Alphonsus M Liguori.
Email Post