MEDITATIONS ON CHRISTIAN DOGMA TREATISE I. GOD. 32. THE BOOKS OF LIFE AND DEATH. 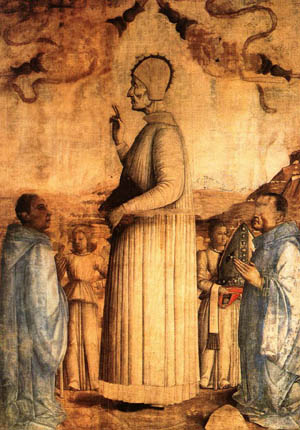 St. Lawrence Justinian, BpC
MEDITATIONS ON CHRISTIAN DOGMA
TREATISE I. GOD.
32. THE BOOKS OF LIFE AND DEATH.
I. "There shall not enter into it anything defiled . . but they that are written in the book of life of the Lamb (Apoc. xxi. 27). Certain states used to keep a " Golden Book," in which were written the names, the pedigree, the titles, the services of their distinguished citizens. God has such a book ; it is the book of life ; and one day it will be opened before all the world. At present no one knows all the names that are written in it. This book is God's consciousness, it is His knowledge of those who are His and will be His for all eternity. The first name is that of Our Lord Jesus Christ, the first-born of mankind. Then follow the names of all the redeemed ; first the name of the Virgin Mother of God, who is blessed among women ; then the great saints and servants of God; then a "great multitude whom no man can number of all nations, and tribes, and peoples, and tongues " (Apoc. vii. 9) ; and lastly the baptized infants. This book is written outside as well as in. Many names have been written there temporarily ; for many have served God for a while with all fidelity, and when they have grown older or encountered temptation they have fallen away and become reprobate, and their names have been erased from that roll of glory. Here are written many names that have never appeared in the catalogues of honour of this world ; here are the poor, and the meek, and the mourners, and the persecuted, many whose footprints we should kiss if the secrets of that book were now made known to us. Desire no honour but this : " Rejoice that your names are written in the book of life " (Luke x. 20).
II. In like manner there is a terrible book of death, a book of repudiation and divorce of miserable souls from their heavenly Spouse. The first in this book is Lucifer, " the king over all the children of pride " (Job xii. 25), then Antichrist, the great leader of the last days against the kingdom of God on earth ; then the princes of the army of wickedness, heresiarchs, persecutors of the faith, seducers of the people, leaders of anti-Christian thought, corrupters of innocence, and many whose names have been held in honour by men, and have figured for centuries in history. Then come the ordinary run of sinners, the malicious, the worldly, the avaricious, the careless, and those who have made the most of this life and have not laid up treasures for the next. This book also is written on the outside, inasmuch as many who have held a prominent position there as enemies of God, of the Church, of souls, have repented, and have been transferred by God to the Book of Life. Your name may have once been in this book. Is it there still ? O Lord, " see if there be in me the way of iniquity, and lead me in the eternal way" (Ps. cxxxviii. 24).
III. These facts must not discourage us, or make us think that our fate has been already settled, and that it is useless to try to alter a foregone conclusion. Although God knows what will happen, His knowledge does not determine the event; it is still undecided, and depends on our efforts. In like manner God knows whether a ship will ride out a storm, or whether the fields will yield a harvest: but for all that, the result depends on the captain s efforts or the farmer's labour. To renounce all effort is to force God to foresee the failure. Moreover God has said : " If I shall say to the wicked, Thou shalt surely die, and he do penance for his sin, . . . none of his sins which he hath committed shall be imputed to him ... he shall surely live and not die" (Ezech. xxxiii. 15, 16). The foresight of God is practically as if it did not exist ; it does not make labour superfluous. Your destiny still depends on yourself, aided by God. Do your best, persevere to the end, and you will certainly be saved.
MEDITATIONS ON CHRISTIAN DOGMA BY THE RIGHT REV. JAMES BELLORD, D.D.
Email Post