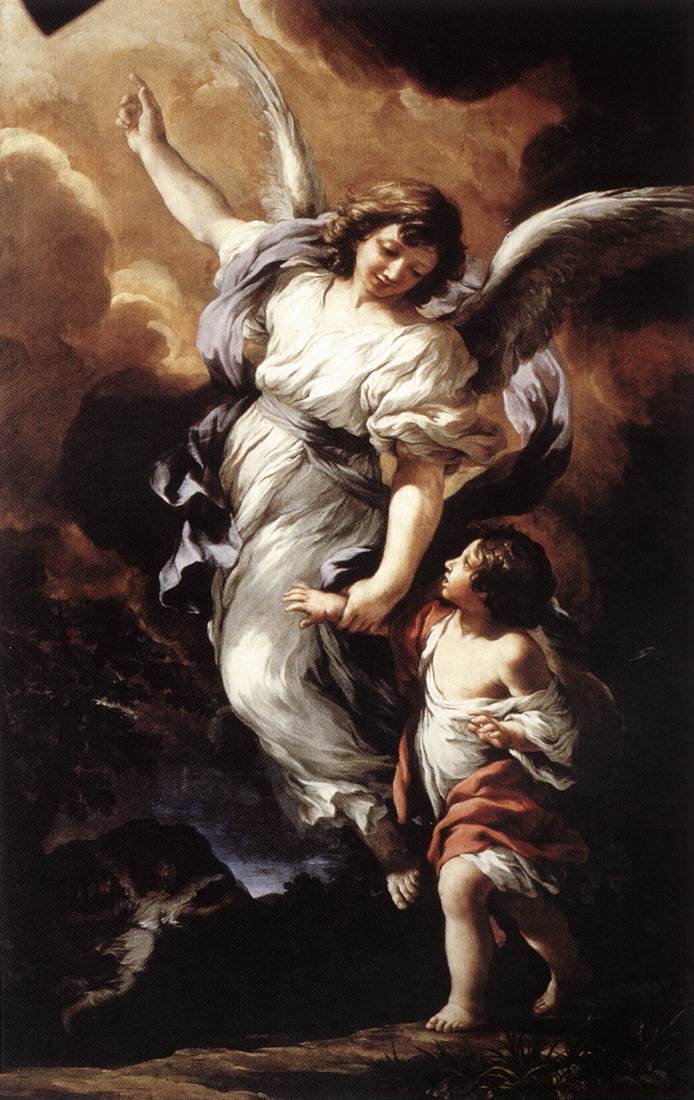 CORTONA, Pietro da
The Guardian Angel
1656
MEDITATIONS ON CHRISTIAN DOGMA.
TREATISE II.
8. JESUS CHRIST AND THE FATHER.
I. Jesus Christ as man shows us an example of profound respect towards God the Father : 1. He addresses the Father in terms of honour, as "Just Father, Holy Father, Lord of heaven and earth. Abba, Father, all things are possible to Thee." 2. He exhibits a profound deference and humility towards His Father, prostrating Himself when .praying, as in the Garden of Gethsemani. " In the days of His flesh, offering up prayers and supplications, He was heard for His reverence " (Heb. v. 7). 3. During His life, in all His actions He sought, not His own glory or pleasure, but His Father s. He led men to the knowledge and love of Him, He exalted Him in His preaching, He allowed Himself to be angered at one thing only, the profanation of the house of God. He attributes to the Father His own greatness and all His wonderful works: "I live by the Father" (John vi. 58). "The Father who abideth in Me, He doth the works " (John xiv. 10). Imitate your great model in this regard. Show the most profound veneration in word and deed towards God, His name, His presence, His house, His representative the Church, His commands, His teachings. Avoid the smallest flippancy, carelessness, familiarity towards His infinite and most awful Majesty, before which the angels stand abashed.
II. Our Lord also manifested a vivid filial confidence in the Father. Before He came into the world He said by the mouth of David : " From My mother s womb Thou art My God ; depart not from Me. For tribulation is very near ; for there is none to help Me" (Ps. xxi. 11, 12). On every occasion, in every need, He has recourse to His Father, to preserve His flock from evil, to sanctify them, to pardon His enemies, to co-operate in His miracles. He prepares for His daily work by spending the whole night in prayer; He returns thanks for His works when accomplished : " Father, I give Thee thanks that Thou hast heard Me, and I knew that Thou hearest Me always" (John xi. 41, 42). Above all, Our Lord s confidence appears when He seeks support under His fearful burden on the night before His Passion, and when commending His soul into His Father s hands on the Cross. Job had already indicated this when he said : "Although He should kill Me, I will trust in Him " (Job xiii. 15). Always remember the omnipotence, the love, the promises of your heavenly Father. Ground your confidence on vivid faith and holy life, and it will never be disappointed. Few have real confidence ; fewer still can maintain it under necessary trial and delay ; and because they waver they do not merit to receive anything from the Lord (James i. 6, 7).
III. Above all others the absorbing sentiment of Our Lord was love for His Father in heaven. This love extended to the works of God made in His image and likeness, that is, to man. Love was the motive which drew Him from heaven in order that He might vindicate the glory of His Father, and save our souls from destruction, by restoring under another form the order of salvation which Satan s malevolence had overthrown. Divine love, embracing zeal for God s glory and man s salvation, was the fire which Our Lord brought on earth and wished to see enkindled in our hearts (Luke xii. 49). It was this same love too that led Our Saviour to His bitter death, as we learn from His words on leaving the supper-room for Gethsemani : " That the world may know that I love the Father, and as the Father hath given Me commandment, so do I. Arise, let us go hence " (John xiv. 31). Let the love of God pre dominate in your heart, animate all your life, and drive out all that is opposed to it. This secures the fulfilment of all the law and the pardon of all sins ; it is the sum of all religion.
MEDITATIONS ON CHRISTIAN DOGMA BY THE RIGHT REV. JAMES BELLORD, D.D.
Email Post