MEDITATIONS ON CHRISTIAN DOGMA. TREATISE II. 9. THE SECOND PERSON, AS THE WORD. 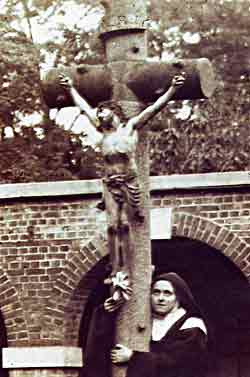 St Therese Of Lisieux
MEDITATIONS ON CHRISTIAN DOGMA.
TREATISE II.
9. THE SECOND PERSON, AS THE WORD.
I. "Who shall declare His generation?" (Isa. liii. 8). The procession of the Persons in the Trinity is an ineffable mystery, deep in the secret recesses of the Godhead, never to be thoroughly comprehended. Scripture, however, conveys sufficient indications of it to guide our faith. The Second Person is called the Word by St. John. He is a Word that is in God, an internal word spoken to Himself; otherwise, a thought. St. Paul speaks of the Son of God as being " the brightness of His glory, the figure of His substance, the word (or expression) of His power " (Heb. i. 3), and also as the " image of God " (Col. i. 15). The Old Testament speaks of God the Son in a veiled manner as the Wisdom of God. " It is a vapour of the power of God, and a certain pure emanation of the glory of Almighty God. It is the brightness of eternal light, and the unspotted mirror of God s majesty, and the image of His goodness. And being one it can do all things ; and remaining in itself the same it reneweth all things " (Wisd. vii. 25-27). These passages convey to us some notion of the nature and of the proceeding of the Second Person from the First in the Trinity. This divine Word first proceeds internally in the spiritual being of God; secondly it proceeds externally in a visible form to convey to created intelligences the thought of God, and this is Jesus Christ the Word of God made flesh. You must produce the Word of God, the image of God, Jesus Christ, in your soul and actions by supernatural virtue and the reception of the Blessed Sacrament.
II. The names thus applied to the Second Person indicate the mode of His proceeding from the First. This is not corporeal, but intellectual and spiritual. A human mind conceives a thought, an image. This is inseparable from the mind, and yet it is different from the mind. God is a pure intelligence; His essential action is intellectual. His intelligence fixes its regard on the totality of truth and reality, that is, the Divine Essence itself. The perception of this is a full, and therefore infinite image of God's substance, and is the adequate expression, or word, of His being. This perception is the product of the full exercise of God's infinite activity; it is equal to that action ; that is, it is infinite; that is, it is God. So perfect is this reflection of God in His own intelligence that it is itself the Divinity as communicated : and the conscious action produces a conscious reflex action, each equal to the other, each existing in the same substance, and differing from one another only in that one produces and the other is produced. How mysterious are the wonders of Infinite Being! They are utterly beyond our powers of discovery. Thank God for having granted you a glimpse of them as in a glass and in a dark manner, while waiting for the revelation of the perfect day.
III. The production of the Word of God, the Second Person, is an eternal action ; it is not something which has taken place in a remote past ; it never began or ended ; it is always in progress ; it is the actual mode of God's existence. This action also is necessary and inevitable. It is not the association in equal dignity of a second (and of a third) being with one who is already all-sufficient; but it is that the Infinite Being has an infinite action in Himself, and this action has an infinity and reality of effect which is without example in our limited experience of finite actions. The productive action in the Trinity is with in the infinite circle of God s substance, so that there is no multiplication or increase of the Divinity. The terms of the operations in God are called Persons ; the word is our nearest approximation to an ineffable fact, and we must beware of being misled by its current untheological sense of individuals who are substantially distinct from one another. Ask God to enlighten your understanding, to strengthen your faith, and to manifest Himself to you in this mystery.
MEDITATIONS ON CHRISTIAN DOGMA BY THE RIGHT REV. JAMES BELLORD, D.D.
Email Post