MEDITATIONS ON CHRISTIAN DOGMA.TREATISE II. 17. THE MUTUAL INDWELLING OF THE DIVINE PERSONS 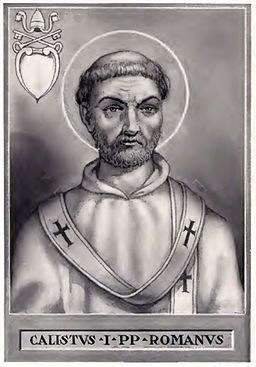 St. Callistus I, PM
MEDITATIONS ON CHRISTIAN DOGMA.
TREATISE II.
17. THE MUTUAL INDWELLING OF THE DIVINE  PERSONS.
I. The three Divine Persons of the Holy Trinity, although differing as to personality, are inseparable as to the Essence or Substance of the Divinity, which is absolutely one in Them. So They are said to dwell with one another and in one another. St. John says: " The Word was with God," and "The only-begotten Son who is in the bosom of the Father" (John i. 1, 18). In the same Gospel Our Lord says: "The Father who abideth in Me, He doth the works. Believe you not that I am in the Father and the Father in Me ?" (John xiv. 10, 11). Therefore wherever the Father is, or the Son, or the Holy Ghost, there are also the other two Persons. The Divine Essence which is in the Father is fully in the Son and the Holy Ghost ; for the Divinity, or the Divine Essence, is Father, Son and Holy Ghost. No one of the Persons can exist apart from the whole of the Divine Essence ; nor apart, consequently, from the other Persons, who are fully in the Divine Essence. The personal relations and productions are not external but are immanent. The Father generates the Son, not as a separate entity, but by an intrinsic intellectual action within Himself; the Father and Son also produce the Holy Ghost by an interior action of mutual love, which is entirely within Themselves. This indwelling is called the circumincession. You are also substantially in God and God is substantially in you when you are in the state of grace ; and the three Divine Persons are with you, as Our Lord promised: "If any one love Me . . . My Father will love him, and We will come to him and will make Our abode with him" (John xiv. 23).

II. The Persons of the Blessed Trinity also dwell in one another intellectually, by the fact that each has the fullest perception, knowledge and consciousness of the others ; or, as we may express it, they are inseparable in their thoughts. This mutual consciousness of one another may be called a communication of minds, or a divine conversation between the three Blessed Persons. There is nothing else like to this. Intellectual communication is imperfect, at its best, between different men. As between God and man, God bears us always and most completely in His mind; but our feeble, wandering, frivolous, sensual minds can only with great difficulty fix themselves for a short time on God. In the next life we shall have a much closer union of intelligence with God; we shall contemplate Him without distraction ; we shall see all things in Him and in His knowledge of them ; but yet we shall never see and understand Him as Father, Son and Holy Ghost do, in Their mutual indwelling. Aspire to this union now ; it is necessary for the perfecting of man s intellectual life on earth.

III. There is also an inseparable indwelling of the Divine Persons on account of Their mutual love. Love is an attracting and uniting force. The soul is wrapped up, as we say, in that which it loves, and dwells in it by the delight felt in it. "Where thy treasure is, there is thy heart" (Matt. vi. 21). Each Divine Person perceives the infinite goodness, beauty and delight of the Godhead that exists in the others ; and They are drawn together by a unifying attraction and love each for the other, such as would tend to make Them a unity if They were not already in the strict est sense such. Let nothing separate you from the love of God. This completes your union with Him in this life and in the next. The love of God is also the uniting force required by mankind for social harmony and progress. Other combining influences are not strong enough to resist the forces of isolation and disintegration. Even human love itself is transient though violent ; it is little more than sensual and animal, unless refined, directed, and made perma nent by resting on divine love.