MEDITATIONS ON CHRISTIAN DOGMA.TREATISE II. 18. THE MISSION OF THE DIVINE PERSONS. 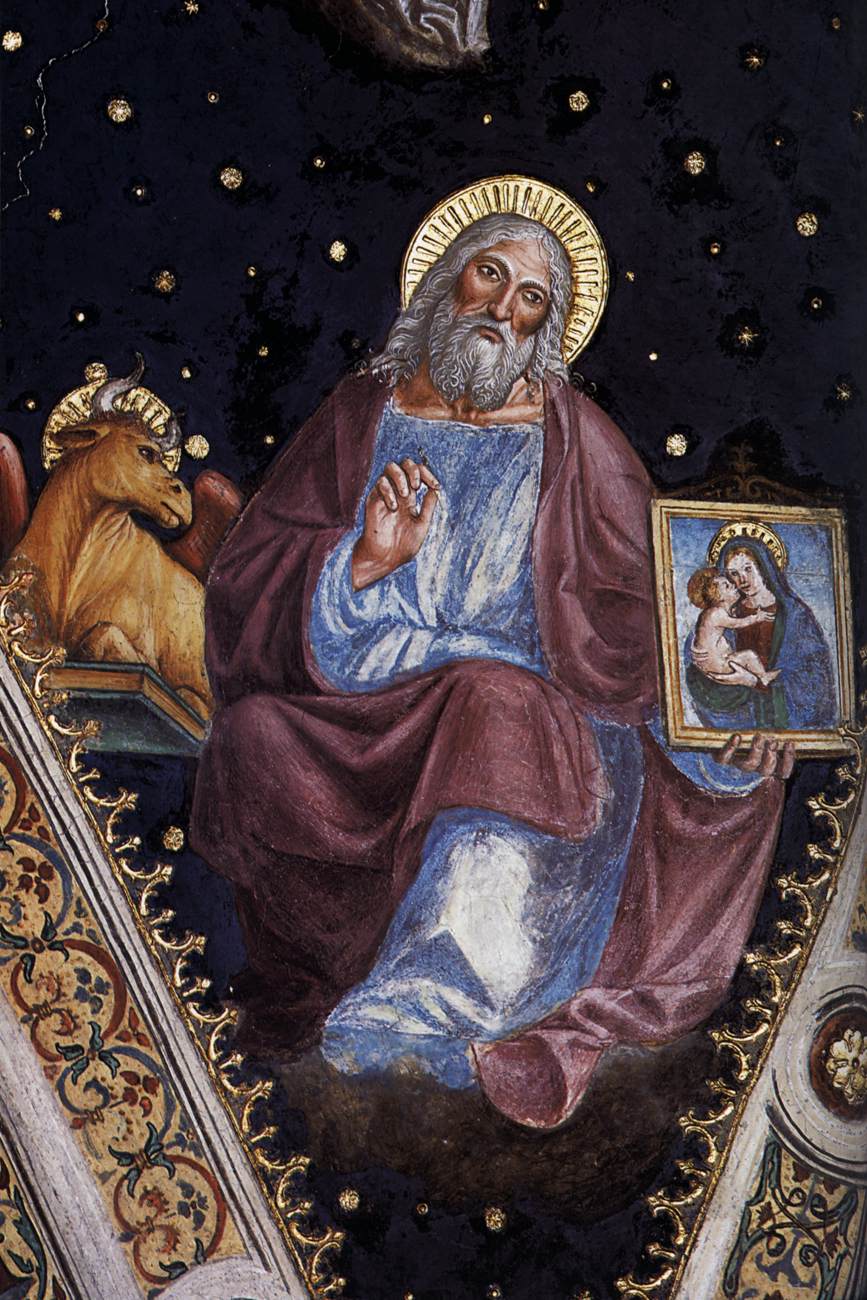 FOPPA, Vincenzo
St Luke
1510
MEDITATIONS ON CHRISTIAN DOGMA.
TREATISE II.
18. THE MISSION OF THE DIVINE PERSONS.
I. Our Lord several times spoke of His being sent by the Father, and of His sending the Holy Ghost into the world. This is called the external mission of the Divine Persons. It corresponds externally to the internal production of the Persons within the Godhead. It is the divine processions of the Trinity continued on the lower plane of the world of human souls, making the Divine Persons present in a new way with us, and producing in us an infusion of divine chanty and various operations of grace. The Mission, then, consists of two elements, the eternal procession of a Divine Person and the temporal production of grace. As in the eternal processions there is a person producing and a per son produced, so in the temporal mission there is a person sending and a person sent The Father proceeds from none, He therefore is sent by none. The Son proceeds from the Father, and so is sent by the Father. The Holy Ghost, who proceeds from Father and Son, is consequently sent by Father and Son jointly. As in the Trinity, so in the mission of the Divine Persons there is no separation of Person from Person, but They abide in one another, and all are bestowed when one is sent. Thus there is an unbroken chain of action binding all being together from God down to the smallest atom. There is a supreme infinite action in God which produces the Divine Persons. The reverberations of that action pass on into creation, and produce the Divine Persons in the souls of men. Their presence and Their grace lead to the production of virtuous acts in us; and we in turn act upon the lower creation.
II. There are two forms of the temporal mission of the Divine Persons; one is visible and r>ne invisible. The sending of God the Son as man into the world to preach, to labour, and to suffer visibly, was the first form of divine mission. Such also was the coming of the Holy Ghost upon the Apostles in flames of fire. Generally, however, the grace of God works in secret ; for " the kingdom of God cometh not with observation" (Luke xvii. 20). The Divine Persons come invisibly and softly into the soul to work in it Their powerful effects ; according to the word of Job : " If He come to me I shall not see Him ; if He depart I shall not understand" (Job ix. 11). This exercises our faith and humility. We possess God, and yet we cannot be puffed up by the certainty of possessing Him ; we still have to work in fear and trembling ; we walk by faith in God s word, and not with the assurance of sight. But while we fear, we have no reason for discouragement, but rather for trust ing with blind confidence in God.
III. Wonderful must be the effects produced in the soul by such messengers as the Eternal Son and the Holy Ghost. These effects are not the effects of nature. When we speak of the divine missions we do not mean the operations carried on by the Divinity as head and source of the natural order of the world. The mission spoken of is that which is supernatural, and which makes God to be present with us in special and more than natural ways. The Divine Mission has as its object to produce sanctifying grace in our souls and increase it, to withdraw us from sin and eternal loss, to enable us to produce acts of virtue or render special services to God and His Church. You really receive at times a special influx and presence of the Divine Persons in your soul ; you are aided by Them and act with Them and by Them. How splendid this is ! But you need always to watch with anxiety lest the human spirit, or the spirit of the world, or even the spirit of Satan, should in trude itself into your mind and become the motive power of your actions. Humility, obedience, and the love of God will be your preservatives.
MEDITATIONS ON CHRISTIAN DOGMA BY THE RIGHT REV. JAMES BELLORD, D.D
Email Post