MEDITATIONS ON CHRISTIAN DOGMA.TREATISE II. 20. THE GLORY OF THE BLESSED TRINITY. 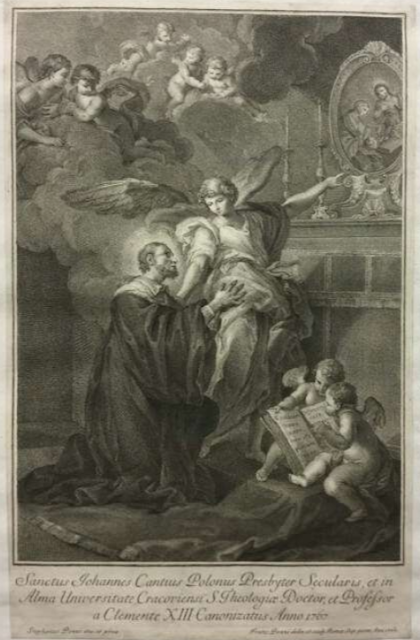 St. John Cantius
MEDITATIONS ON CHRISTIAN DOGMA.
TREATISE II.
20. THE GLORY OF THE BLESSED TRINITY.
I. "There are three who give testimony in heaven, the Father, the Word, and the Holy Ghost" (1 John v. 7). The Divine Persons give testimony to one another eternally. It is Their essential glory that each is thoroughly comprehended in all His infinite perfections by the other two Divine Persons, and is appreciated and valued accordingly, and is praised and glorified, therefore, to an adequate and infinite extent. Compared with this, all the appreciation and praise of creatures and glory from them is but as a grain in the balance. As God has wrought all His mighty operations in Himself, anteriorly to creation, and without the assistance of creatures ; so the Divine Trinity glorifies Itself infinitely, within Itself, and has no need of us. Jesus Christ speaks to His heavenly Father of " the glory which I had, before the world was, with Thee " (John xvii. 5). And again : " I have glorified Thee on earth : I have finished the work which Thou gavest Me to do. And now glorify Thou Me, O Father, with Thyself" (John xvii. 4, 5). The glory given by the Divine Persons to one another in Their revelations and works on earth is but a faint presentation of the glory which They render to one another within the Divine Essence. Rejoice and praise God for the fact that He receives the full glory which is His due, that He does not depend upon man for it, and that our offences and blasphemies do not impair that infinite glory which is of His essence.
II. There is another praise and appreciation and glory rendered to the Blessed Trinity. This comes from the enormous hosts of the angelic spirits. It is a secondary, inferior and finite glorification, but it surpasses immeasurably all the glory of the service and praise that the whole of mankind could render. We read frequently of this in Holy THE TRINITY. 113 Scripture : " The morning stars praised Me together, and all the sons of God made a joyful melody" (Job xxxviii. 7). The prophet describes to us the Seraphim standing with veiled faces before the throne of the Most High : " and they cried out one to another and said, Holy, holy, holy, the Lord God of hosts, all the earth is full of His glory" (Isa. vi. 3). Again, at the birth of Our Lord there was " a multitude of the heavenly army, praising God, and saying : Glory to God in the highest" (Luke ii. 13, 14). St. John shows us how the hosts of heaven for ever give praise and honour and benediction to their Lord, prostrate before His throne, and never resting day or night (Apoc. iv. 8-11). When you see this world so full of iniquity, and refusing to accord to God the belief, the worship, the obedience, the love that He deserves, think of the still greater universe of spirits with all its rich endowments giving glory to God, without exception, without any alloy of infidelity, and without cessation.
III. Even this world renders much glory to the Holy Trinity. Apart from the manifestation of God in the natural order and the praise given to Him on that account, there is the supernatural glory rendered by the great sacrifice which, from age to age, is offered unceasingly from the rising to the setting of the sun, in the presence of millions of devout worshippers. There is the perpetual worship before the tabernacle of Jesus, going on in every Church throughout the world ; and the recitation of the Divine Office day and night with its hymns, and psalms, and special versicles of praise at the end of each of them. And further, in this unfaithful and apostate world, there are many times over in every land the seven thousand who have not bowed their knee to Baal, but who have dedicated their whole being to glorifying God by copying His attributes in their lives. Your life must be one of two things ; either you will join yourself with those named, in glorifying God, or you are necessarily on the side of Satan, engaged in dishonouring God and blaspheming His name.
MEDITATIONS ON CHRISTIAN DOGMA BY THE RIGHT REV. JAMES BELLORD, D.D
Email Post