MEDITATIONS ON CHRISTIAN DOGMA.TREATISE III. 2. THE EXISTENCE OF THE ANGELS. 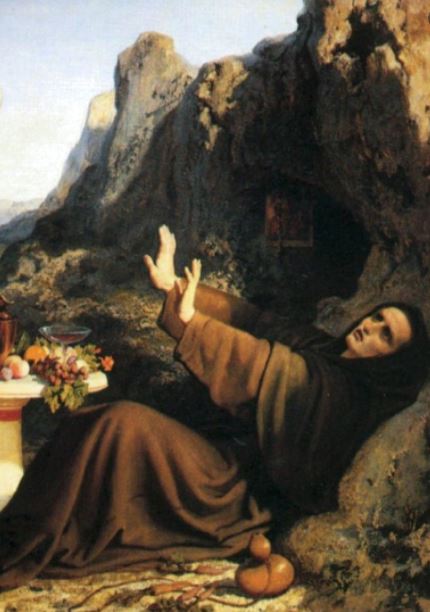 St. Hilarion, Ab
Feast 21 Oct
MEDITATIONS ON CHRISTIAN DOGMA.
TREATISE III.
2. THE EXISTENCE OF THE ANGELS.
I. All creation is arranged in a regular sequence of stages. So much so, that science has on occasion asserted the existence of some species of animal that seemed needed to fill up a gap in the series : and that species has subsequently been discovered. Life is found everywhere, and in every conceivable form. Scientific men have observed that any form of life which is possible, considering the analogy of the rest of creation, is also probable. So we might have inferred the existence of angels if it had not been revealed to us. Tracing creation towards its source we come to more and more simple forms of life. Solid matter may be traced back to liquid and gas, and at last appears under forms of extreme tenuity. It is conjectured that the lightest of known substances, hydrogen, may be the primal form of matter out of which all the chemical elements have been made up. Then we arrive at immaterial, intangible forces, ether, heat, electricity, and the still more mysterious force of gravitation. As beings grow refined we find that they have a greater range, and greater power, and that they are able to pass through the substance of more solid beings. Analogy would lead us to surmise that there must be a still more refined class of existences, spiritual beings in fact, endowed with enormous powers. Adore in silence the marvellous possibilities of the power and wisdom of God.
II. In man we have what is manifestly the last term of material development on this earth. In him matter is raised above its natural level and associated with the nobler forces of mind and will. His further development is of necessity on the higher plane of the intellectual, the moral, the social, the spiritual. This points to boundless possi bilities, not only in the way of further human progress, but in regard to the existence of other classes of beings more perfect in mental and spiritual qualities, who begin where man leaves off, and carry on the chain of existence by more degrees than fill the interval between the jelly-fish and man. It is evident that the full height of created being is not attained in man. There is room yet for innumerable grades between him and God. The work of the Almighty would be justly considered as incomplete, as abruptly broken off and frustrate, if it ended in humanity as the summit of all creation. As reasoning compels science to assume certain things which can never be proved, such as the ether, atoms, gravitation, so would it force us, without other evidence, to conjecture the existence of such beings as angels. How wonderfully revelation completes our knowledge ! How necessary is faith in addition to science !
III. The extraordinary abundance of life around us argues at least as great a variety and wealth of life in the boundless realm beyond our senses where the Almighty dwells. Comparing small with great, we feel that there must be courtiers and guards innumerable in the halls of the Eternal, and that they must be high beyond conception, in rank, in energies, in duties, in splendour of endowments. There are ministries for such beings as well as for us. God s works are not limited to the range of our experience or even of our imagination. His attributes require a much greater space for their manifestation than is afforded by the whole of the visible universe. God has therefore, as the Scripture tells us, made a whole universe of noble spirits to stand before Him, and minister to Him in duties far superior to ours. Great as you are in the material creation, you are weak and miserable compared with the higher world. Strive to raise yourself to it ; above all dc not fall lower than your already lowly position.
MEDITATIONS ON CHRISTIAN DOGMA BY THE RIGHT REV. JAMES BELLORD, D.D
Email Post