Novatus Was A Man Of A Turbulent Disposition, Seditious And Avaricious, And That His Faith Was Suspected By The Bishops 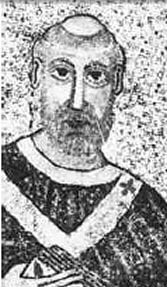 Pope Cornelius
Novatus and Novatian
7. Novatus and Novatian. Novatus was a priest of the Church of Carthage. St. Cyprian relates that he was a man of a turbulent disposition, seditious and avaricious, and that his faith was suspected by the bishops. He was accused of robbing the orphans and widows, and appropriating to his own use the money given him for the use of the Church. It is said he allowed his father to die of starvation, and afterwards refused to bury him ; and that he caused the death of his wife by giving her a kick, and causing premature labour. He was also one of the principal agents in getting the deacon Felicissimus ordained priest without the leave or knowledge of St. Cyprian, his bishop, and was one of the principal leaders of the schism of Novatian, exciting as many as he could to oppose the lawful Pope, Cornelius (32).
We now come to speak of the character and errors of Nova- tian. Being possessed by an evil spirit he was baptized in bed during a dangerous fit of sickness, and when he recovered he neglected getting the ceremonies of baptism supplied, and never received confirmation, which, according to the discipline of the Church in those days, he ought to have received after baptism, and his followers, for that reason, afterwards rejected this sacrament. He was afterwards ordained priest, the bishop dispensing in the irregularity he incurred by being baptized in bed. Hence his ordination gave great umbrage both to the clergy and people. While the persecution was raging the deacons begged of him to leave his place of concealment, and assist the faithful, who were dragged to the place of punishment ; but he answered, that he did not henceforward intend to discharge the duties of a priest ; that he had his mind made up for other objects. This was nothing less than the Popedom, which he had the ambition to pretend to, puffed up by the applause he received for his oratorical powers. At this time, Cornelius was elected Pope, and he, by intrigue, got himself consecrated privately by three ignorant bishops whom he made intoxicated. Thus he was the first anti-Pope who ever raised a schism in the Church of Rome. But what will not ambition do ? While he administered the Eucharist to his partizans, he exacted an oath from each of them, saying, " Swear to me, by the blood of Jesus Christ, that you will never leave my party and join Cornelius" (33). The errors of Novatus and Novatian were the following: they denied that the Church could use any indulgence with those who became idolaters through fear of persecution, or that she could grant pardon for any mortal sin committed after baptism, and they denied the sacrament of confirmation. Like the Montanists, they condemned second marriages, and refused communion on the point of death to those who contracted them (34).
(32) Baron. An. 254, n. 50. ; Nat. t. 7,
(33) Nat, loc. cit. ; Baron, n. 61, &c. c. 3, or. 3, 4; Fleury, t. 1, 1. 6, n. 51.
(34) Nat. Alex, ibid; Van Ranst, p.
CHAPTER III.
Heresies of the Third Century
1. Praxeas.
2. Sabellius.
3. Paul of Samosata.
4. Manes.
5. Tertullian.
6. Origen.
7. Novatus and Novatian.
8. Nepos The Angelicals and the Apostolicals.
THE HISTORY OF HERESIES, AND THEIR REFUTATION.ST. ALPHONSUS M. LIGUORI
Email Post