Paul of Samosata Bishop of Antioch. by extortion and sacrilege, by selling justice, and making false promises, he amassed a great deal of wealth. 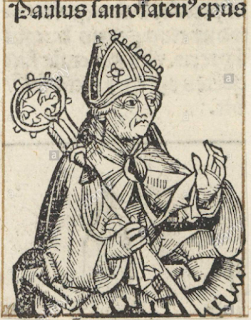 Paul of Samosata
3. Paul of Samosata was Bishop of Antioch. Before his appointment to the see he was poor, but afterwards, by extortion and sacrilege, by selling justice, and making false promises, he amassed a great deal of wealth. He was so vain and proud that he never appeared in public without a crowd of courtiers ; he was always preceded by one hundred servants, and followed by a like number, and his own praises were the only subjects of his sermons ; he not only abused those who did not flatter him, but frequently also offered them personal violence; and at length
CHAPTER III.
Heresies of the Third Century
1. Praxeas.
2. Sabellius.
3. Paul of Samosata.
4. Manes.
5. Tertullian.
6. Origen.
7. Novatus and Novatian.
8. Nepos The Angelicals and the Apostolicals.
THE HISTORY OF HERESIES, AND THEIR REFUTATION.ST. ALPHONSUS M. LIGUORI
Email Post