Sabellius Denied The Distinction Of The Three Persons In The Trinity, And They Were But Three Names To Distinguish The Different Operations Of The Divinity. 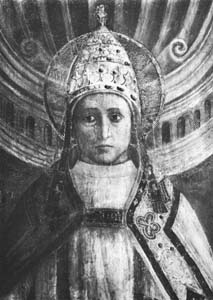 Pope Zephyrinus was accused by Hippolytus of Rome
of tolerating Sabellian-type views.
2. Sabellius was born in the Ptolemais in Africa, and lived in the year 227. He shed a greater lustre, if we may say so, on the heresy of his master, and on that account this impious sect was called Sabellians. He denied the distinction of the three persons in the Trinity, and said they were but three names to distinguish the different operations of the Divinity. The Trinity, he said, was like the sun, in which we distinguish the light, the heat, and the form, though the sun be but one and the same. The light represents the Son, the heat the Holy Ghost, and the figure or substance of the sun itself the Father, who, in one person alone, contained the Son and the Holy Ghost (3). This error we will refute in the last part of the work.
(3) Nat. Alex. t. 7, c. 3, ar. 7 ; Orsi, Euseb. ; Van Ranst, p. 65. t. 2, /. 5, n. 14 ; Hermant, 1. 1, c.
CHAPTER III.

Heresies of the Third Century