Tertullian Asserted The Church Could Not Absolve Adulterers, That Those Who Married A Second Time Were Adulterers, And That It Was Not Lawful To Fly From Persecution 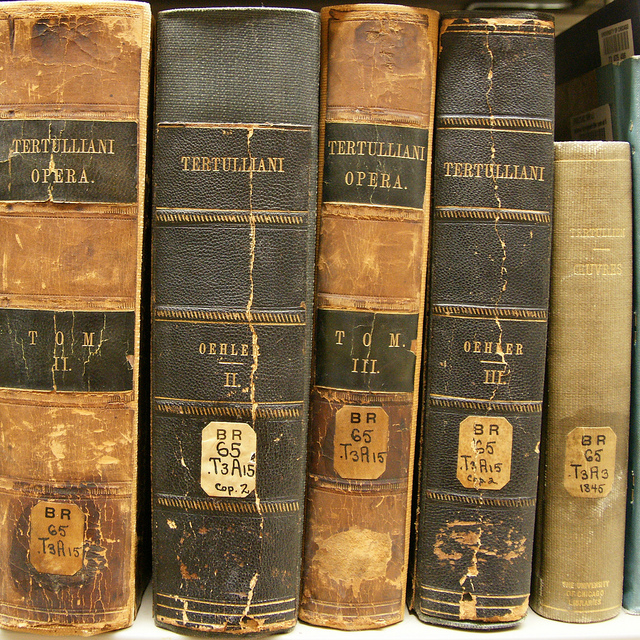 Tertullian
5. Tertullian was born, as Fleury (8) relates, in Carthage, and his father was a centurion in the Pretorian Bands. He was at first a Pagan, but was converted about the year 197, and was a priest for forty years, and died at a very advanced age. He wrote many works of the highest utility to the Church, on Baptism, Penance, Idolatry, on the Soul, on Proscriptions, and an Apology for the Christians, which has acquired great celebrity. Although in his book on Proscriptions he calls Montanus a heretic, still, according to the general opinion of authors, he fell into Montanism himself. Baronius says that he was cut off from the Church, and excommunicated by Pope Zepherinus (9). Tertullian was a man of the greatest austerity ; he had the greatest veneration for continence; he practised extraordinary watchings, and on account of a dispute he had with the clergy of Rome, he attached himself to the Montanists, who, to the most rigid mortification, joined the belief that Montanus was the Holy Ghost. N. Alexander proves, on the authority of St. Jerome, St. Hilary, St. Pacianus, St. Optatus, and St. Augustin, that he asserted the Church could not absolve adulterers, that those who married a second time were adulterers, and that it was not lawful to fly from persecution. He called the Catholics, Psichici, or Animals. Fleury says (10), that Tertullian taught that the soul was a body, of a palpable form, but transparent, because one of the Prophetesses heard so in a vision. Both Fleury and Noel Alexander say (11), that he forsook the Montanists before his death, but a sect, who called themselves Tertullianists after him, remained in Carthage for two hundred years, until the time of St. Augustin, when they once more returned to the bosom of the Church.
(8) Fleury, t. 1, L 4, n. 47.  mant, t. 1, c. 65; Fleury, t. 2, L 8,   n. 1012; Baron. Ann. 277, . 1,  & seq. ; Graves, in sec. 3.
(9) Baron. Ann. 201, n. 3, & seq. ad.
(10) Fleury, t. I, 1. 5, n. 25.
(11) Fleury, t. 1, I. 6, n. 3, cum St. 11 ; Fleury, t. 1, /. 25 & 26 ; Orsi, Augus. & Nat. Alex. t. 6, c. 3, ar. t. 3, /. 8, n. 28. 8, n. 9.
CHAPTER III.
Heresies of the Third Century

THE HISTORY OF HERESIES, AND THEIR REFUTATION.ST. ALPHONSUS M. LIGUORI
Email Post