MEDITATIONS FOR ADVENT: The Creation and Fall of the Angels 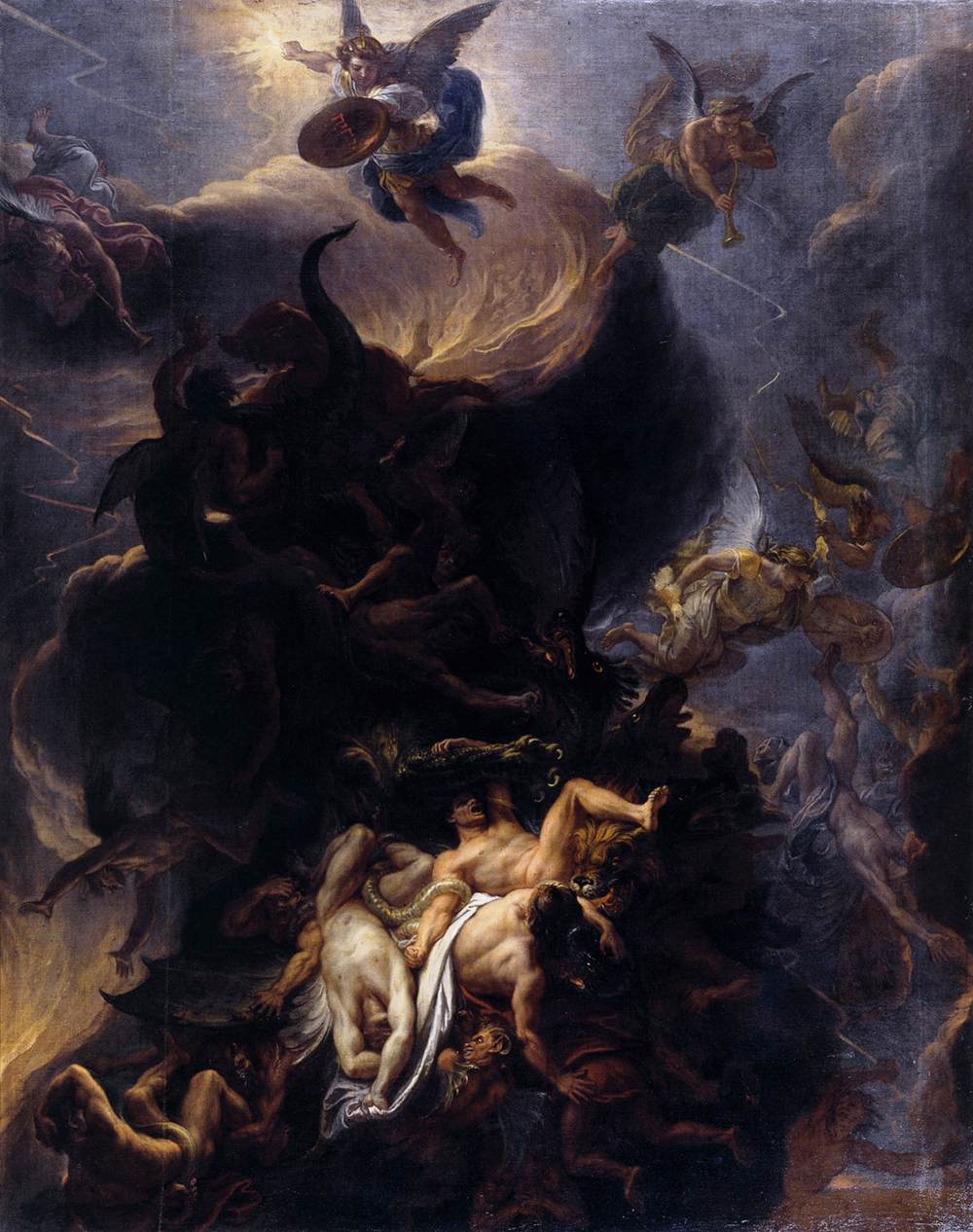 LE BRUN, Charles
The Fall of the Rebel Angels
before 1685
The Creation and Fall of the Angels
God, who is a pure spirit, wished to create pure spirits like himself, spirits who, like him, live with intelligence and love, and who are blessed in knowing and loving him as he is happy in knowing and loving himself, and thus carry in their very bosom a divine character by which they are made in his image and likeness.
These most perfect creatures were drawn forth from nothingness like all others and, although perfect, they are fallible by their nature. The one who is by his nature infallible is the one who comes from himself and who is perfect in his essence. As he is the only perfect thing; everything except him is defective: “Even in his servants he puts no trust, and his angels he charges with error” (Job 4:18).
He is not, however, the one who caused their error. Nothing but the very best comes from so good and powerful a hand. All of the spirits are pure in their origin; all these intelligent beings were holy in their creation, for in them God at once formed their nature and poured out his grace upon them.
Everything can change, except God. “Behold, God puts no trust in his holy ones, and the heavens are not clean in his sight” (Job 15:15). Those he created to serve him were not stable; “and his angels he charges with error.” A friend of Job said this and was not rebuked by that irreproachable man. It was the common doctrine of the whole world, in conformity with this thought: “God,” said Saint Peter, “did not spare the angels when they sinned, but cast them into hell and committed them to pits of nether gloom to be kept until the judgment” (2 Peter 2:4). And Jesus Christ himself said, speaking of Satan, “there is no truth in him” (John 8:44).
“How are you fallen from heaven, O Day Star?” (Isa. 14:12). You carried in yourself “the signet of perfection, full of wisdom and perfect in beauty” (Ezek. 28:12). You had with you all the sanctified spirits in the paradise of our God, “every precious stone was your covering” (Ezek. 28:13), the brilliance and ornament of grace. Like a cherubim with outstretched wings, you shone “on the holy mountain of God; in the midst of the stones of fire you walked, blameless in your ways from the day you were created, till iniquity was found in you” (Ezek. 28:14-15). How was it found there? By what path did it enter? Was error able to insinuate itself amid so much clarity, or depravity and iniquity amid such great graces? Truly, everything that is drawn forth from nothingness holds to it always. He was sanctified, but he was not holy like God; he was at first ruled, but not like God, whose very will is his rule.
One of his beauties is that he was endowed with a free will, but not like God’s free will, which is indefectible. This proud and wretched spirit made himself his own end; admiring his own beauty, he became a snare to himself, saying, “I will ascend above the heights of the clouds, I will make myself like the Most High” (Isa. 14:14). This high creature desired an elevation other than the one proper to him: he wished to be like God, together with the other spirits he seduced into imitating his pride. And all at once he was “brought down” and cast into “the depths of the pit” (Isa. 14:15), where we who are on the earth see him. There was no other cause of his defection than his own will.
O you proud and rebellious men, take heed of the example of the prince of rebellion and pride. See and consider what a single instance of pride did in him and in all of his followers.
Let us flee, let us flee from ourselves. Let us recall our nothingness. Let us find in God our whole foundation, and let us place all our love in him. Amen. Amen.
Archbishop Jacques-Bénigne Bossuet
Email Post