MEDITATIONS ON CHRISTIAN DOGMA.TREATISE III 6. THINGS UNKNOWN TO THE ANGELS. 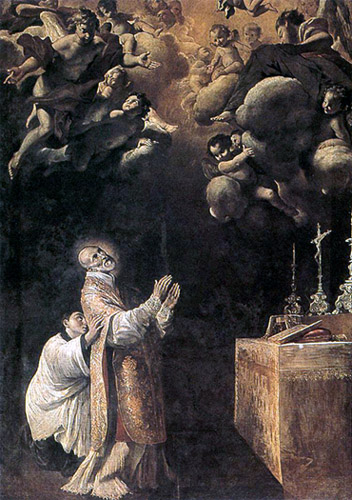 St. Andrew Avellino, C
MEDITATIONS ON CHRISTIAN DOGMA.
TREATISE III
6. THINGS UNKNOWN TO THE ANGELS. 
I. God alone is omniscient. Every creature is finite, and feels this in its intelligence ; so the knowledge of the angels, extensive as it is, is subject to limitations. God alone, for instance, holds the wonderful power of reading futurity. His future acts, and the future acts of the liberty of man are known to Him alone. Our Lord tells us that the date of the day of judgment is unknown even to the angels in heaven ; many other things must also be hidden from them, including probably the ultimate destiny of individual men. So far as they know such things, we must suppose that they are revealed to them specially by God, when the knowledge is necessary for our utility and for their service. It is surmised that after their creation and before their trial they did not fully know what the result would be in the way of reward or punishment. As to affairs on earth their natural powers would often enable them to conjecture truly as to future events, proceeding as men do from past experience and the knowledge of antecedent causes. We may safely assume that the bad angels would be less likely to receive any knowledge of the future from God, and they could only form a judgment about it from their observation of natural laws. Do not be astonished that God has imposed limitations on your knowledge and curiosity. Accept them humbly, and do not be so arrogant as to suppose that you ought to share with God in His omniscience.
II. The angels cannot read the secrets of our hearts, and still less can the evil spirits do so. They may indeed dis cover them, as our fellow-men do, by the indications which we give either consciously or unconsciously, but not other wise. God has given us complete mastery over our wills and thoughts. He alone, the absolute Lord of all, has the power and right to penetrate into the secret recesses of our interior : according to the words, " Thou alone knowest the hearts of the children of men" (2 Par. vi. 30). If we keep our determinations strictly to ourselves, no one is able to intrude within our domain. The knowledge of thoughts, like the knowledge of the future, is peculiarly the sign of divine power. As God has allowed no other but Himself to penetrate into the domain of your thoughts, you in like manner should exercise your dominion by preventing any other from ruling there but God. He has made it your sanctuary ; do you make it also His.
III. The angels are further unable fully to sound the deeps of the perfections of God and His great mysteries. Even to them His judgments are incomprehensible and His ways unsearchable; and no one but the Spirit of God knoweth the things of God (Rom. xi. 33 ; 1 Cor. ii. 11). The angelic intelligence, vast as it is, is, still, as incapable as ours of taking in infinity ; and it is no more than a small mirror held up to reflect the whole expanse of the heavens. It may be that the whole of the revelation made to man was not known beforehand to the angels, and that they only learnt of certain of the mysteries of God when they were made known by Our Lord Jesus Christ. From Scripture we learn that at least the evil spirits did not know of the Divinity of Jesus, inasmuch as they tempted Him so as to ascertain in what sense He was the Son of God. There remains much for the good angels yet to learn concerning the infinite abysses of wonder in the Divinity. For them, as for us, there is an inexhaustible store from which they will be satiated in ever-increasing measure for all eternity. Life for them and for us will be an unending progress in new activities and new attainments of intellect and will. You have to open that path of progress while living here. Sin stunts and destroys your spiritual activities, and cuts you off from future progress.
MEDITATIONS ON CHRISTIAN DOGMA BY THE RIGHT REV. JAMES BELLORD, D.D
Email Post