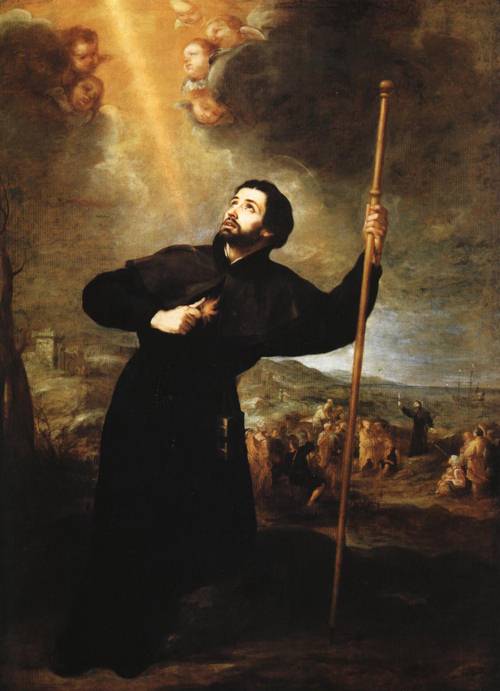 St. Francis Xavier, C
MEDITATIONS ON CHRISTIAN DOGMA.
TREATISE III.
12. THE FIRST HIERARCHY.
I. An ancient work formerly attributed to St. Denis the Areopagite sums up the ancient Jewish and Christian traditions concerning the different orders of the angels and the characteristics of each. The author gathers from Holy Writ, and principally from St. Paul s Epistles, the names of nine choirs, and arranges them in three greater divisions or hierarchies according to their dignity. The first hierarchy comprises those spirits who are devoted to the immediate service of God, and stand, comparatively speaking, within the veil. The highest of the three choirs is that of the Seraphim. Their characteristic is the intense and burning love which they render to Him who is the source of all love, and is Himself infinite Love. They are the created representation of that high divine perfection ; and in that consists their service and glorification of God. This keeps them for ever in the adorable Presence, worshipping, and crying one to another, " Holy ! Holy ! Holy ! the Lord God of Hosts" (Isa. vi. 3). The love of God is the final service of Him, the most worthy of Him. the most perfect offering of yourself to Him. It is the completion and crown of the other departments. of our service, and at the same time is the summary of them all. God sums up all His perfections for us in His love ; and He desires above all things our love in return. Join yourself with the Seraphim, and ask them to bring a burning coal from the celestial altar to enkindle your frozen heart.
II. The Cherubim are the second choir. God is the sole object of their service, and they too stand for ever round His throne. We attribute to them a deep knowledge and science of God ; it is accompanied indeed by an intense love, but this is subsidiary to the activity of their intelligence. Their characteristic is to reflect the infinite wisdom, to be representatives of the action of the divine intellect, to glorify it thereby, and to praise it. On account of their all-penetrating vision of the Divine Essence, they are represented by the prophet as being full of eyes, their bodies, and their necks, and their hands, and their wings (Ez. x. 12). They see and understand the beauty of God, and are the means of communicating this knowledge tu the inferior choirs of the blessed spirits. The knowledge of God is perfect justice (Wisd. xv. 3). It is a great and lofty service of Him to think of His presence, meditate on His attributes, and seek out in His works the evidences of His power, and wisdom, and love. No science on earth is so wonderful, so beautiful, so satisfying to the soul. Value it beyond all.
III. The third choir in the hierarchy that immediately surrounds the majesty of God is that of the Thrones. God is a spirit, universally present, not limited to any spot ; His throne, His presence chamber, His courts, can only be spoken of in a figurative way ; we speak of such things to indicate, not really to describe, that which is ineffable. By the Thrones we mean a choir of spirits upon whom the divine Majesty, in some spiritual sense, rests and reposes. Isaias speaks of the throne of God being high and elevated, and of the temple being filled by those which were beneath Him (Isa. vi. 1. Vulgate). The virtue attributed to these spirits is a profound submission by which they recognize the supreme authority of God and exhibit it to others. Amongst men the throne of an earthly monarch is the symbol of his authority and even of his person, and itself receives honour on account of him whom it represents. You may become like to these spiritual Thrones by your submission to the will and pleasure of God, as made known either in Him or in His representatives. God will then rest and repose upon that throne with glory to Himself and with honour to you. Humble yourself thus, and He will make you truly great.
MEDITATIONS ON CHRISTIAN DOGMA BY THE RIGHT REV. JAMES BELLORD, D.D
Email Post