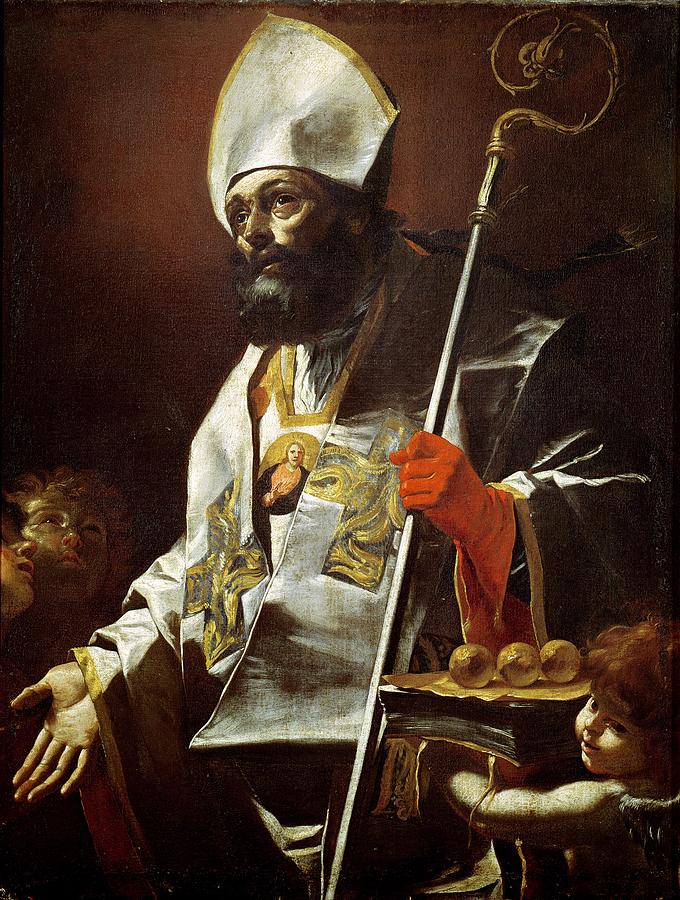 St. Nicholas, BpC
MEDITATIONS ON CHRISTIAN DOGMA.
TREATISE III.
13. THE SECOND HIERARCHY.
I. The three choirs of the second hierarchy are, according to St. Dionysius, associated with the external rule of God over creatures. The Dominations are the first of these. They represent the universal sovereignty of the Creator over all things, they manifest that perfection, assert it, and promote it. The petition of the Our Father, "Thy kingdom come," expresses the object of their existence. The special virtues of these angels are, therefore, profound adoration towards the majesty of God, zeal for the maintenance of His authority, hostility to all those numerous forms of usurpation by which the devil, or the world, or the flesh, thrust themselves into the place of God as supreme objects of human homage and service. You require the spirit of these holy Dominations in yourself, and their aid in your work for God. A contest is always in progress between the two standards of Christ and Satan. A large portion of mankind have adopted, more or less consciously, the spirit of him who said " I will not serve," and have cast off the yoke which is sweet and the burthen which is light. The honourable service of God is the only true liberty. Those who cast it off only change masters, and they become the bond-slaves of evil, of misery, and of Satan. As far as you can, promote the reign of God in yourself and others.
II. The second choir is that of the Virtues. The meaning of the word in this connexion is rather that of Scripture than of common parlance. It does not mean moral excellences such as patience, faith, etc., but the strength, energy and overwhelming force of God. So the frequent expression of the Psalms " Dominus Deus Virtntutn" is rendered "the Lord God of Hosts." In the New Testament we read, " the power (virtus) of the Lord was to heal them" (Luke v. 17). The function of these spirits is to represent that perfection of God which " reacheth from end to end mightily" (Wisd. viii. 1), and compels all things to H:s will. This is that power of God which produces miraculous effects in the realms of matter and of mind. It may well be supposed that God entrusts to this choir of spirits the execution of His great works of power, and the duty of aiding others who are so engaged. The moral virtue that corresponds is Fortitude ; it is the quality of Apostles and Martyrs, of mighty workers and sufferers. You need the aid of this blessed choir ; you are so subject to weakness, discouragement, cowardice. " The scourge is come upon thee and thou faintest, it hath touched thee and thou art troubled. Where is thy fear, thy fortitude, thy patience, and the perfection of thy ways ? " (Job iv. 5, 6). Only in the power of thy God.
III. The Powers represent that second aspect of the might of the Lord by which " He ordereth all things sweetly " (Wisd. viii. 1). This is a force in which there is no feverish exertion or abusive excess of power. The peculiarity of this choir is expressed in the Beatitude : " Blessed are the meek, for they shall possess the land" (Matt. v. 4). It is exhibited notably in the Church, which is always oppressed and always victorious ; which does not take the sword of the flesh for her defence, and therefore cannot perish by the sword ; and which finds that the blood of her martyrs is the seed of abounding harvests. In accordance with this, when the power of the Almighty was manifested to Elias, it was not in the great strong wind, nor in the earthquake, nor in the fire, "but in the sound of gentle stillness" (3 Kings xix. 12 Hebr.). To these angels is also attributed a special power against Satan and his hosts. Do not attach too much importance to mere natural vigour of character, to a restless animal activity, to excitement and enthusiasm in good works. Quiet effort united with prayer is the most efficient and lasting force.
MEDITATIONS ON CHRISTIAN DOGMA BY THE RIGHT REV. JAMES BELLORD, D.D
Email Post