MEDITATIONS ON CHRISTIAN DOGMA.TREATISE III. 10. THE GENERAL ENDOWMENTS OF THE ANGELS. 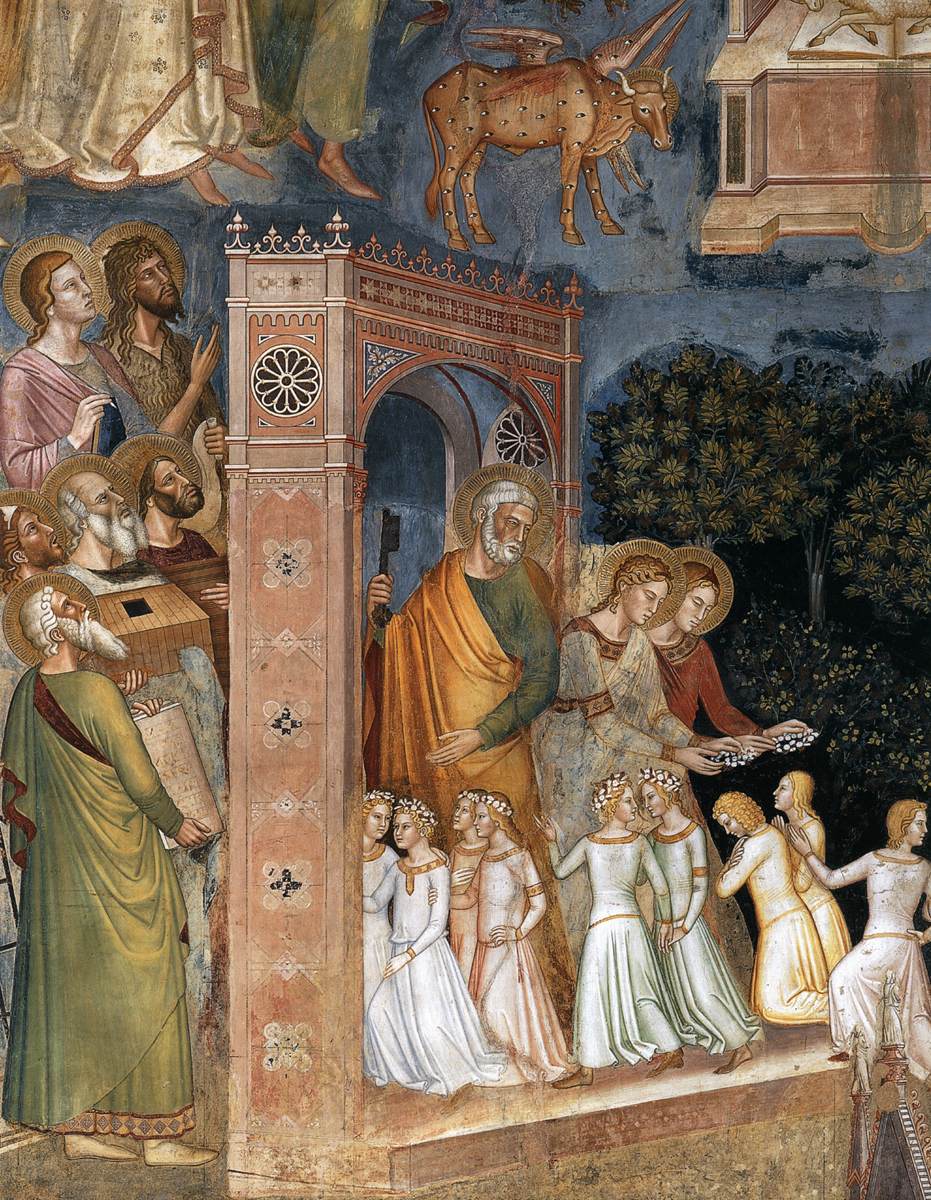 ANDREA DA FIRENZE
The Church as the Path to Salvation (detail)
1366-67
MEDITATIONS ON CHRISTIAN DOGMA.
TREATISE III. 10.
THE GENERAL ENDOWMENTS OF THE  ANGELS.

I. The Old Testament speaks of Lucifer under the figure of the King of Tyre, and makes known to us something of the first state of the angels. " Thou wast the seal of resemblance, full of wisdom and perfect in beauty. Thou wast in the pleasures of the paradise of God. . . . Thou wast a cherub stretched out and protecting, and I set thee in the holy mountain of God. Every precious stone was thy covering- . . . Thou wast perfect in thy ways from the day of thy creation, until iniquity was found in thee" (Ez. xxviii. 12-15). It may be reasonably presumed that the case of Adam was parallel to that of the angels ; and God created him in grace, spoke with him familiarly, and communicated to him both natural and divine knowledge. Hence has arisen the opinion prevalent in the Church and supported by the Fathers, that the angels were not created in an imperfect state, and on a lower level than the one they were destined to occupy ; but that they were from the first placed on the supernatural level, clothed with sanctifying grace, and adorned with the infused habits of faith, hope, charity, and the other virtues required of them. How magnificent is the generosity of God to His rational creatures! It is far beyond the lavishness with which, as we know, He endows the material creation. It is beyond all our claims and desires. He so equips us for our career that we cannot fail except by the fault of our own malice.
II. The graces bestowed on the angels must have comprised the illumination of their primary faculty, the intellect, by the revelation of great truths and mysteries. St. Augustine thinks they can never have been in a state comparable to darkness or ignorance, but must have been from the first as full of the light of knowledge as they were of sanctifying grace. What that revelation consisted of we cannot know ; probably it was much more than has ever been made known to men by the light of faith, but not amounting as yet to the Beatific Vision. They must have known much of the greatness and goodness of God, of their duties of love and obedience towards Him, of the future designs of His Providence, of His rewards and punishments. We may suppose that among these things were the mysteries that have been revealed to us, the Trinity, the Incarnation, the Creation of the world. The illumination of your intellect with divine truth is the chief foundation of your spiritual life and salvation. God has accorded this to you. He has not left you to be carried about by every wind of doctrine, but has given you a fixed certainty. It is one of the most precious of His gifts. Return Him thanks for it.
III. The Creator also must have given the angels the graces which belong to the will and which move it to action ; and thus they were able from the first to co operate with God s action, to elicit acts of various virtues, and to merit an increase of the divine communications. Their first impulse would necessarily be one of movement towards God; for the essential qualities of a being assert themselves spontaneously, the voice of nature always makes itself heard, and the faculties seek for that object which they are made to exercise them selves upon. This impulse was an attraction and not a compulsion ; for, as rational beings, the angels were free, and so were able to conform themselves or not to the law of their being. As Adam loved and served God before the trial and rebellion and fall, so it is possible that even the angels who afterwards revolted may have aspired to God supernaturally before the trial was proposed to them. The good angels corresponded to grace from the first and persevered to the end. Be faithful to every call or grace from God. One step leads on to another. A small initial divergency from the straight line may continue till it becomes a gulf over which no man can pass.
MEDITATIONS ON CHRISTIAN DOGMA BY THE RIGHT REV. JAMES BELLORD, D.D
Email Post