Our Lady Of La Salette's Warning For Scooter Riding Irish Priest Father Peter O’Connor: The Priests Are Asking Vengeance, And Vengeance Is Hanging Over Their Heads.

I was going to post possible Impending Doom for Dublin after watching the Priest mock the Holy Sacrifice of the Mass - but I decided to wait and see what would happen to Dublin.

Granted the burning down of a Free Masonic Lodge is not much of DOOM for Roman Catholics - but maybe there is an underling rage being built up in Dublin. The devils have set been loose and that demonic scooter riding priest is leading the charge.

So I will keep you posted on the coming Dublin DOOM events.

I wonder if FSSP Rad Trad Ann Barnhardt is responsible for this latest attack on the Freemasons.....

Anti-vaccination graffiti found after suspected arson at Masonic Hall
Freemasons say they have been previously targeted by ‘ridiculous’ campaignAnti-vaccination graffiti has been found on the pavement outside the Freemason’s Grand Lodge in Dublin which was damaged in a suspected arson attack on New Year’s Eve. Witnesses said a man was seen climbing through a broken window into the front room of the building which contains the lodge’s library at about 5.20pm. A Christmas tree was set on fire. There was nobody in the hall at the time. A man in his 30s who was injured when he fell from the window into the basement was taken to St James’ Hospital with spinal injuries. Graffiti was sprayed in blue paint on the pavement outside the building, which has been the headquarters of Freemasonry in Ireland since the 1860s. Source 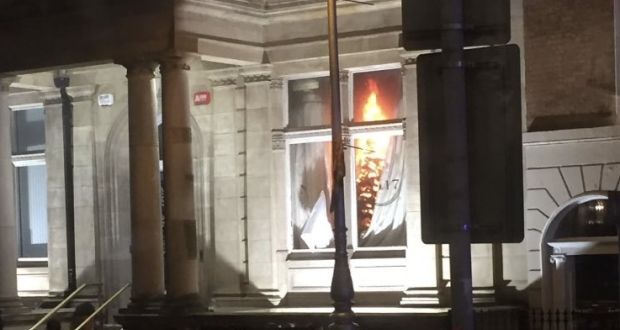 Man taken to hospital as firefighters extinguish flames at Masonic Lodge in Dublin
DUBLIN FIRE BRIGADE has extinguished a fire in a Masonic Lodge in Dublin city centre. An ambulance brought one man to hospital for injuries that are understood to be serious, gardaí confirmed. Firefighters, gardaí and an ambulance attended the scene on Molesworth Street in Dublin 2 this evening. In a statement to The Journal, a spokesperson for Dublin City Council said: “At 1740, the Eastern Regional Control Centre received a 999 call reporting a fire in the Masonic Lodge on Molesworth Street.” “Three fire appliances, a turntable ladder, district officer and ambulance were dispatched to the scene,” the spokesperson said. “Firefighters using Breathing Apparatus fought the fire containing the fire damage to one room. The fire was extinguished shortly after 1800.” Source
Email Post