FBI identifies Texas synagogue 'terrorist' as 44-year-old British man Malik Faisal Akram: US officials liaise with Met Police over gun-toting intruder who held four captive before being shot dead - as Liz Truss condemns 'act of anti-Semitism'
The British man who was shot dead after taking four people hostage inside a Texas synagogue has been identified as a 44-year-old man from Blackburn. Malik Faisal Akram was shot dead after a stand-off with American intelligence officers at Congregation Beth Israel in Colleyville, Texas on Saturday. Akram, who was reportedly armed with 'backpacks of explosives', had demanded the release of convicted Pakistani terrorist Aafia Siddiqui - known as Lady Al Qaeda - who police say was referred to as his sister. He held the hostages, including Rabbi Charlie Cytron-Walker, trapped inside the Congregation Beth Israel in Colleyville, approximately 27 miles from Dallas, for about 10 hours before being shot dead. 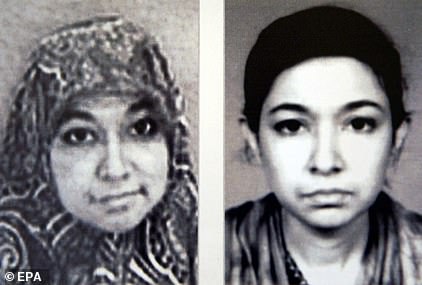 Aafia Siddiqui - known as Lady Al Qaeda
All of the hostages were subsequently reported free and safe. Foreign Secretary Liz Truss took to Twitter to condemn the 'appalling act of terrorism and anti-semitism in Texas'. Ms Truss added: 'We stand with US in defending the rights and freedoms of our citizens against those who spread hate.' Lead FBI special agent Matthew DeSarno confirmed Akram was a British citizen and that 'at this time there is no indication that other individuals are involved' in a statement released to the media on Sunday afternoon. He said the FBI Shooting Incident Review Team would conduct a 'thorough, factual and objective investigation'. Counter Terror police also confirmed to MailOnline they would continue to work with 'US authorities and colleagues in the FBI' in the coming days as the investigation into Akram's actions continues. It comes as dramatic livestream footage revealed the moment two hostages ran out of the temple. Akram can be seen popping out of the door as he chases after them with a gun, before quickly retreating back inside and closing the door after spotting the nearby SWAT team. Dozens of agents then breach the synagogue as gunshots can be heard. A spokesman for the Foreign, Commonwealth and Development Office said on Sunday: 'We are aware of the death of a British man in Texas and are in contact with the local authorities.' Source
Email Post