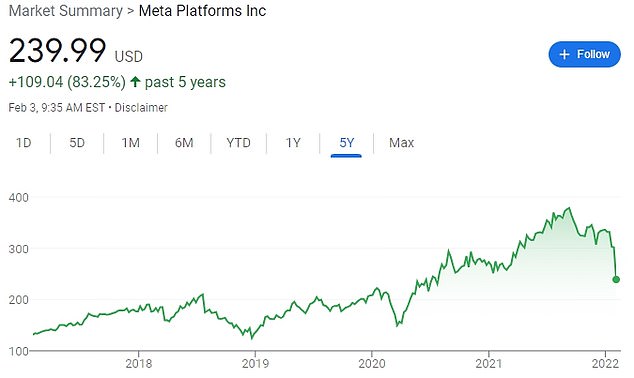 And behold another beast like a bear stood up on one side: and there were three rows in the mouth thereof, and in the teeth thereof, and thus they said to it: Arise, devour much flesh. Dan.7.4
The second Beast is Bear.

BEAR = SOCIAL MEDIA (AI + Microsoft + Facebook + Apple + Youtube + Twitter + Instagram + Google + Amazon's Alexa + Snapchat + WhatsApp + Tik Tok etc...)
Arise, devour much flesh...
Facebook stock plummets 26% in its biggest one-day drop ever
Shares of Facebook parent Meta closed down more than 26% Thursday after the company forecasted weaker-than-expected revenue growth in the next quarter. It also said it’s taking a big hit from Apple’s privacy changes, and showed the first quarterly decline in daily active users on record. The stock finished with its biggest one-day drop ever, ahead of the 19% plummet it saw in July 2018. Thursday’s drop shaved more than $230 billion from its market cap, bringing it to about $660 billion. The company, which released earnings under its new name for the first time with a new reporting structure, missed earnings estimates for the fourth quarter at $3.67 vs. $3.84 analysts were expecting, according to Refinitiv. But it beat on revenue for the quarter, at $33.67 billion vs. $33.4 billion estimated. Still, its revenue forecast of $27 billion to $29 billion for the first quarter fell below analyst expectations of $30.15 billion, according to Refinitiv. The company said Apple’s iPhone privacy changes, which impact its ad-targeting and measuring, would result in a $10 billion revenue hit this year. It also said macroeconomic challenges like inflation and supply chain disruptions, are weighing on advertiser budgets. Facebook is also leaning more heavily into products that generate less revenue in the short term but that executives believe have large growth potential, like Reels on Instagram. The company’s core social media business, reported under its Family of Apps, made $32.79 billion in revenue in the quarter with operating income of $15.89 billion. Meta broke out its Reality Labs segment for the first time, comprising its future-focused business that aims to develop the metaverse. The segment made $877 million in revenue in the fourth quarter with an operating loss of $3.3 billion. The segment lost $10 billion last year, and those losses are growing as it bets on the metaverse. Other social media stocks were down Thursday following Facebook’s plunge. Shares of Snap were down more than 23% Thursday prior to its earnings report after the bell. Pinterest shares lost more than 10% and Twitter shares were off more than 5%. Source
Here is my take on the Four Beasts:
The Four beasts of Daniel are:

If any Churchmen find fault in this let me know.