Fasciculus Myrrhae: Declaring Some Chief Figures Of Our Saviours Passion 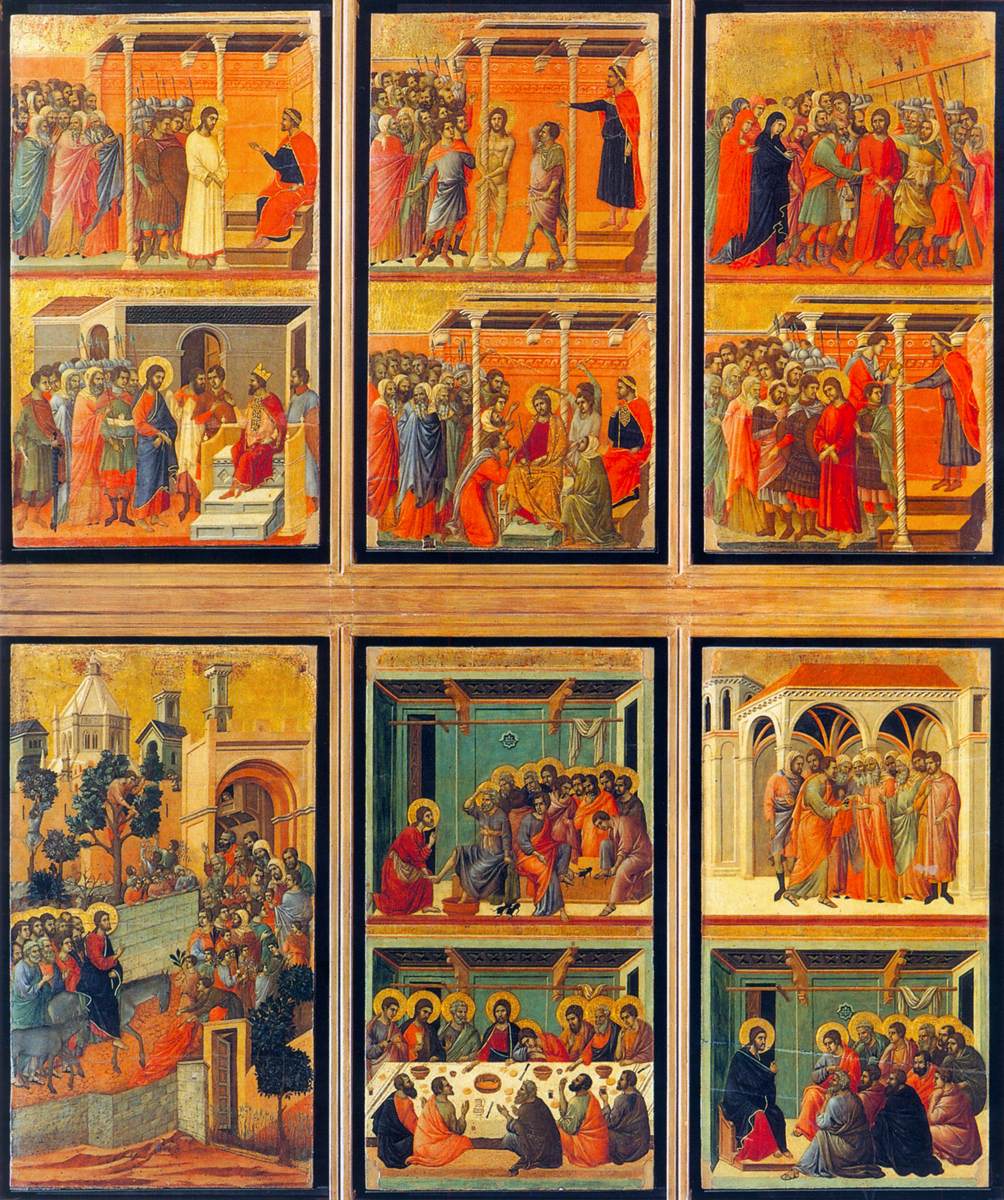 DUCCIO di Buoninsegna
Stories of the Passion (Maestà, verso, detail)
1308-11
THE I. CHAPTER.
Declaring some chief Figures of our Saviours Passion.
WHEN holy Isaac ascended Mount Calvary (as great Authors have affirmed laden with that wood, on which (as a type of his Redeemer) he was to be bloodily sacrificed: God the Father, seemed even then to delight himself, in beholding an Earthly Parent, ready to do that, to his loving, and beloved child, which was by him afterwards for the salvation of mankind, towards his own Eternal Son, and in that very place also, graciously intended.
But could not have been performed on him, had he not been first in the briers of humane nature, & miseries thereunto belonging! (as was the mysterious Ram, in place of Isaac offered) personally entangled.
The brazen Serpent, erected in the desert, to heal the Israelites looking upon it, represented him hanging on his Cross, who laid thereof, in his Gospel, Joan. 3. As Moses lifted up the serpent in the desert, so must the son of man be exalted & c.
This serpent was of brass, as well to show our Saviours wonderful fortitude, in suffering cruel torments silently, as if he had not felt them; as also to let us understand, that he assumed not the poison of sin, with the servile form of our nature, utterly repugnant to the infinite sanctity, and majesty of his person.
That huge, and mysterious bunch of Grapes [Numer. 13.] hung on a post between two, to show the fruitfulness of that country which the Israelites were entering into, figured (saith S. Agustin) the son of God hanging on his Cross, by Jews and Gentiles differently carried: the Jews carry him by believing the scriptures, foretelling plainly; and particularly his passion, yet to as they have their backs towards him, and look not faithfully on him; whereas the Gentiles are delighted to behold him, clustered in his gracious perfections, & distilling from his Cross, the inebriating juice of heavenly consolations plentifully on them.
The Jewish Temple, was a public theater, on which the eternal Father, was delighted to behold his Sons bloody sacrifice, in typical manners, diversely and devoutly represented.
Their chief feasts (as S. Paul in his Epistle, to the Hebrews themselves, & sundry holy Fathers have declared them) were in the mysterious sacrifices, & ceremonies of them, types of our Good-Friday, shadows of our Sunshine, and cloudy representations of heavenly Verities, by the Son of God in his human life & death, graciouſly since that time, and clearly revealed : who, [ as in Gen.3.] was of him mysteriously promised, by receiving the sting of death into his heel (to wit the lowest, and corporal part of our nature ) crushed the Serpents head, and vanquished him utterly for us.
Fasciculus Myrrhae John Falconer 1633
Email Post