FASCICULUS MYRRHAE: Of Our Saviours Prayer, And Bloody Agony In The Garden. 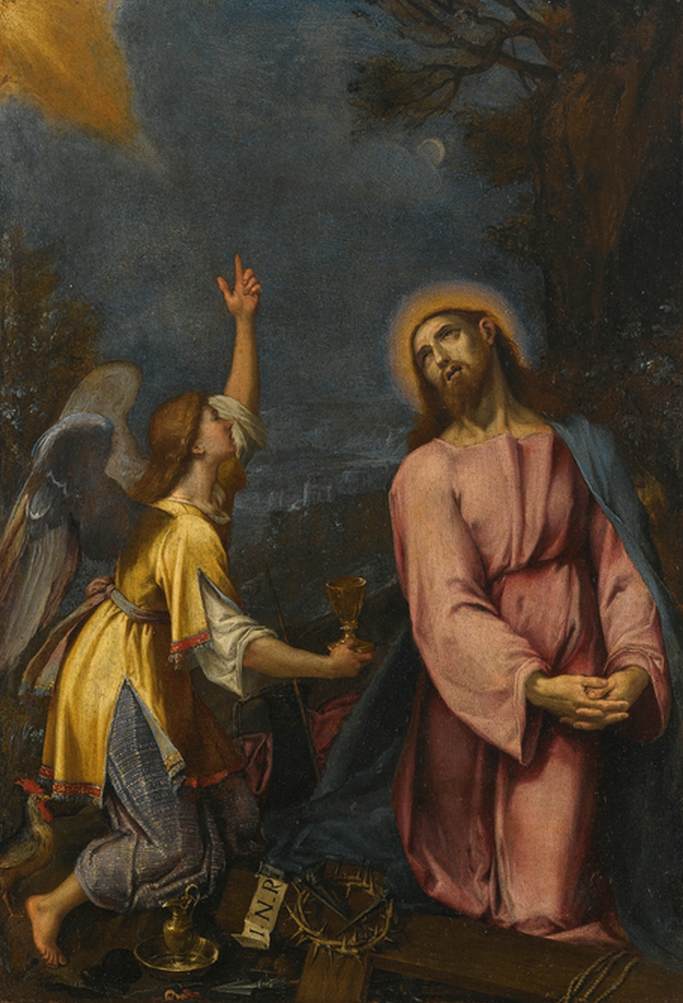 LIGOZZI, Jacopo
Agony in the Garden
THE IV CHAPTER
Of Our Saviours Prayer, And Bloody Agony In The Garden.
HE left at his entrance into the garden eight of his disciples without, that they might not be terrified by the approach of thoſe troops, sent to apprehend him, nor himself seem guarded, with so great a number of constant friends waiting upon him; those three which he took with him, being witness sufficient, to testify his mysterious speeches, and actions there passed, and best prepared, by the wonderful vision, which they had before seen of his glory, against the scandal of his passion approaching:
He began saith the Evangelist: troubled, fearful, and afflicted, having raised indeed, such storms of  human passions, and infirmities in himself, to overcome them in his servants; and to obtain for them, in their painful trials for his sake, contrary virtues.
He was fearful himself, to make them fearless, & undaunted.
He was sad himself, to make them cheerful and comforted.
He was troubled himself, to make them quiet, and courageously constant in their torments.
He prostrated himself groveling on the ground, to express the profound humility of his soul, and heavy load of our offences taken upon him; kissing the whilst, and embracing (as it were) the earth, in token of that happy peace, which he was purchasing for it.
Thrice in his prayer, he called his Passion then approaching, a Chalice, by his Father prepared, to quench, no doubt, his ardent heat of love, and thirsting desire, to honor him, & redeem us, by his drinking of it.
When he cried thrice, Abba Father, if it be possible, let this Chalice pass from me, he lent as it were, a voice to the sensual, and inferior part of human nature, full of fear, and loath to suffer such extremities of torments, as were then presented unto it: yet still he concluded his prayer, in saying, not my will but thine, O Father, be fulfilled, to show withal, that his own superior, and deliberate Will, was ever with his Fathers, perfectly conformed.
And as interiourly he had rejected all thoughts which might comfort him in his sufferings: so when his blood, did naturally run, from the exteriour parts of his body, to comfort his hart, straightened with grief, terrified, and offreflec; beropelled it back again, with ſuch a violent force, as he would rather ope the fores of his body, to let it guſh forth through his garments, on the ground, then acceaue any refre- fing from it.
Hecre he began to treade the Wine-frefie alorie,and imbrued) his hun.ane Sicle allouer, as he ha:) foreiould by his Prophet.
Heere, as our high Prieſt, he began to make an Offertory, ſu- table to his bloudy,and paynful facrifice,conſumatcd afterwards.
Heer he entred into a ſtrayt com- bat agaynſt the inteliine and in- ward focs of humane Nature, as Tedioufnes, Trouble of mynd feare of harmes approching, and the like,to vanquiſh them for vs. As 1
Our Saniosrs ?.fior. 29 As he lay weliring in his bloud on the ground, faynting with the lo!Te therof, and halfe dead, an Angell defcéded from heauen to confort him in fo needfuil an extremity, by lifting him vp( as we may conceaue) fro the groud wiping his bleſſed faceb:lineared with ſweat and bloul, crying bis inbrued garments, and yielding Tuch contortable sotius vaco hiin as himſelfwould not thinka on, to encourage him in his P212 lion.
So as we may rightly call this bloudy Agony of our Saviour 2 voluntary taſt of that birrer Chilies which he drank vp af- tor:vards; a coadincin proof, of hu:nu.20 Nature,truiy by hin, ani palibly allunod; and a pra- ctical meanies, for hiin to exprofl: the bitter extremity of his enſu- ing tormcats : lichence a lively B 3 apo
130 Å Treatiſe of 1 1 apprehension onely of them, was able to make Fortitude it felte to faint, Courage grow feeble, Co- ftancy co farincke, ardent Lone; becoise coo!cd, as it were, for a time, and all enfiammed delires of aſcending his Croilc, turned into feares, inguihes of mynd , and a tedious loaihneile of dying, to. redecreus: Wlii!ſt voluntarily, ſo, and for myſterious cnds, he was gracioufiy pleated to looſe the bridle to humane paſſions,& Inot at allías eally he might haue idone) ſuperiourly rcftraiir them.
Fasciculus Myrrhae John Falconer 1633
Email Post