FIFTH SUNDAY AFTER THE EPIPHANY MEDITATION OF THE PARABLE OF THE COCKLE. POINT IV 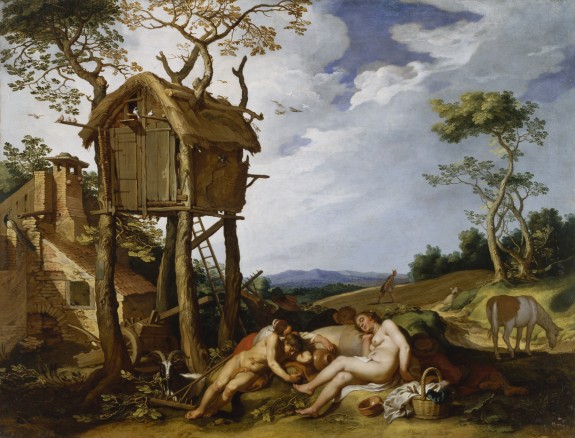 THE XLV. MEDITATION.
Of The Parable Of The Cockle.
THE IV. POINT.
The Father of the family, going forward in his answer, said. Suffer both the Wheat, and the Cockle, to grow together until the time of harvest, and then I will say unto the reapers. Gather up first the Cockle, and bind it into bundles, to be burned: but the Wheat, gather ye into my barn.
1. Where is to be pondered first, how in this parable, Christ our Lord assures us, that until the end of the world (which is the time of reaping) there shall always be Wheat, and Cockle, good, and evil, mingled together, for the divine providence, will never cease, to sow his good seed, in his Church, and in religion, although the devil, endeavor himself to sow Cockle, for ought I to be dismayed to see so many evil men.
For whereas I think, that there are but a few good, because I know them not, yet are there many known to God, and beloved of him: as it chanced to Elias, thinking chat himself was left alone, among the faithful, when almighty God said unto him, that he had, reserved seven thousand others, which had not bowed the knee, to the idol of Baal.
2. The Second shall be to ponder, how that all the time, before the harvest, the Wheat and the Cockle do grow and multiply: for as well the truly good, as the truly evil, do grow during their life, the one in sanctity, the others in iniquity, conform to what Christ our Lord said in the Apocalypse; He that hurteth, let him hurt yet, and he that is foul, let him be more filthy, he that is just, let him be justified yet, and let the Saint be sanctified yet, because I come quickly, and my reward is with me, to render to every one according to his works.
Nevertheless, all this doth pass in different manner, because it is the will of Christ our Lord, that his Wheat do grow and do daily profit from good to better, by his assistance .
But concerning the Cockle, it is only his sufferance to let it grow, and to wax from bad unto worse until the harvest, of which there are two several: the one is of the general harvest, at the end of the world: the other of the particular at the end of the life of every one, when their good or evil, is grown to that height it was to grow to, according to the order or permission of the divine providence: and then he that shall be found to be Cockle, shall be cut down, and rooted out of this life, to be cast into the fire of hell; and he that shall be found clean and pure Wheat, shall be reaped and gathered up, for the garners of heaven.
3. But when the time of the general harvest shall come, Christ our Lord, shall send his Angels, (which are the reapers, and miniſters of the divine justice) who shall gather together all the scandals of his kingdom, & those which work iniquity; and shall cast them into the fiery furnace, that is to say, shall gather together out of his kingdom, all those which are Cockle, as well those which were any scandal, and occasion of sin unto others, by their evil life and doctrine, as also those, who only were evil in themselves: all which shall be bound in different bundles, binding together in one bundle, those that were co partners, in the self same sin, that they may also be co partners in the same pain, and so shall be cast into eternal flames, in such sort as they ſhall never escape them.
And even as fagots, do help to kindle one another: even so those accursed shall be a torment one to another. Ibi erit fletus & stridor dentium, there shall be perpetual weeping, and gnashing of teeth, roaring with rage against themselves , and against those who were the Cause of their damnation.
Colloquie
O my soul homo tremble thou not, at this dreadful judgment, who can resist the ponder of those mighty reapers, who can unbind himself, from so terrible chains who can dwell in so everlasting fires, and live, and converse with such accursed companions, who can endure such bitter complaints, and so enraged gnashing of teeth o accursed Cockle, who sow in earth! discord among the good, and shall forever suffer discord in hell in company of the wicked, preserve me so my God) from such offences, for fear least I fall into so fearful pains, Amen.
4. Finally the same Angels, shall gather the Wheat into the garners of heaven , for the good shall be placed, upon celestial seats, separated everlastingly from the Cockle, and company of evil: at which time, the just shall shine like the sun, in the kingdom of their Father.
Colloquia
O most loving Father I give thee thanks, for the favor which thou tendest unto the just, raising them from the dust of the earth, to reign in thy kingdom, and to be as suns, in thy heaven.  Those who have been singular in serving thee, shining like the sun by the good works they did, shall singularly enjoy thee, shining like the sun, by the reward of the same works; Here they have shined like the sun of justice, thy Son Christ JESUS, by imitating his holy life, and there they shall shine like the same sun, imitating his glory forever and ever, Amen.
Fr. Luis de la Puente
Email Post