Fifth Sunday After The Epiphany Meditation Of The Parable Of The Cockle. Point II 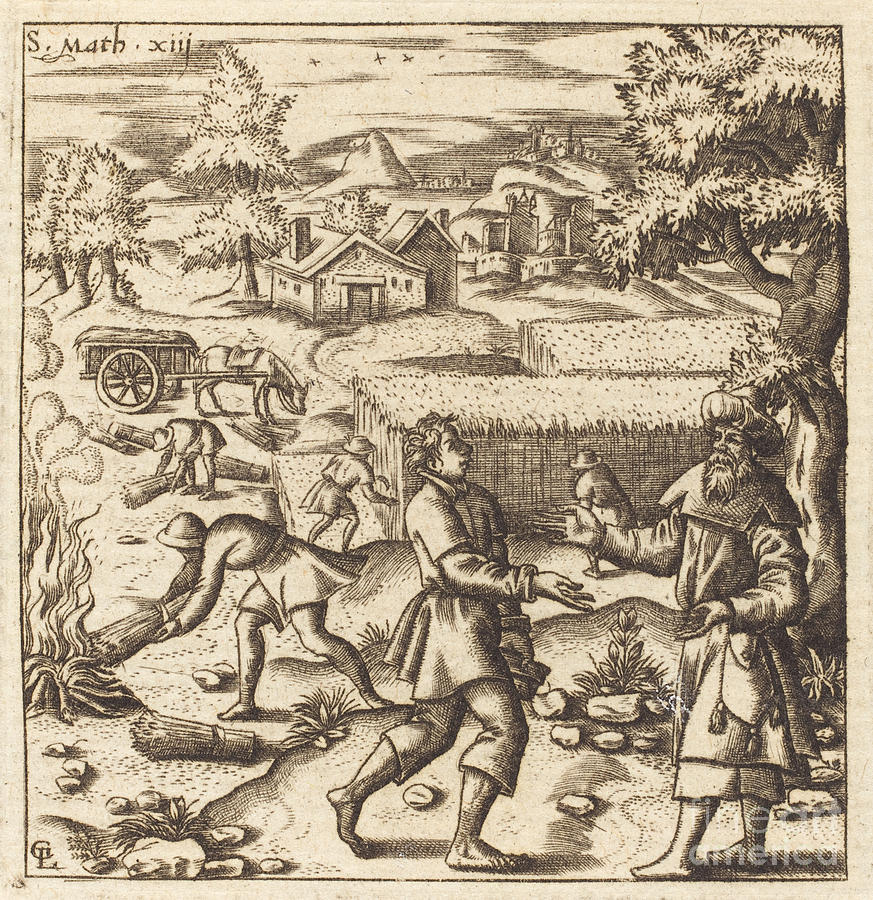 THE XLV. MEDITATION.
Of The Parable Of The Cockle.
THE II. POINT.
The servants of the good man of the house, coming ſaid unto him. Sir didst thou not sow good seed in thy field, whence then hath it so much Cockle? And he said unto them, the enemy; man hath done this.
Ponder first, how the Apostles themselves, and Apostolical men their successors, seeing, the multitude of wicked, of errors, and abuses, which are in the world, amazed, and wounded herewith, run unto almighty God, saying unto him; Lord thou having sown so good seed in the world, how cometh it to be mixed with so much Cockle?
How cometh it to pass, that having chosen twelve Apostles, one of them is changed into a Judas? And in the garden of the Catholic Church, among the Lillies of the just, are found so many thorns and thistles of sinners?
In the houses of Religion, amidst the wheat of the perfect, the Cockle of scandals? And entering into my self, seeing a multitude of vices and passions, which disquiet my soul, I may likewise say to Christ our Lord; Didst thou not sow, within my hart the good seed of holy desires, with holy purposes to forsake all things to serve thee with perfection, whence then proceedeth so much Cockle, as groweth in me? Discover (Lord) the cause unto me, that so I may procure a remedy.
2. Then I will ponder, the answer of Christ our Lord to this demand, saying. The enemy man hath done this. Wherein three particular things are pointed forth.
1. The first, that almighty God our Lord, is no sower of Cockle, nor of evil seed, but only of good, because he is the sovereign good, and from sovereign good, nothing evil can proceed, nor yet induce or tempt thereto.
2. The second is, that Satan is the principal sower of Cockle, from whom doth spring temptations, by reason of the enmity, which he hath sworn against God, and against men: and for this cause he is called in holy Scripture, the Tempter, and those which are the Cockle, are called the sons of Satan, imitators of their Father, whose desires, they endeavor to accomplish.
3. The third is, that albeit Satan be the principal sower of this evil seed, yet (as S. Thomas faith) men are also by means of their own free will, incited thereunto by the passions of the flesh, being tempted: and perhaps for this cause our Savior said. Inimicus homo hoc secit. The enemy man, hath done this, which was to say, the man who is enemy of himself, and of his own soul, and is also mine enemy, hath sown this Cockle in the world, and in himself, and is the cause of this damage.
From these three verities will I take advise, to know the original of my faults, and troubles, endeavoring to stop the passage of these enemies, which work me so much evil.
3. Hence will I ascend, to ponder another more secret sense of this demand.
Didst thou not some good seed in thy field, whence then hath it Cockle? That is to say, wherefore O Lord (the field of the world being thine, thou having created it by thine omnipotence, and redeemed it with thy precious blood, and having ſowed it with so wonderful good, and precious seeds) dost thou suffer, that thine enemy over sown the same with Cockle? Because unless thou dist suffer him, and give him licence to doe it, he durst not be so bold, as to mingle in chine own field, and with thy good ſeed, his evil seed.
To this demand, and in this tense, Christ our Lord did not give answer, who will not that we curiously found his secret judgments, but that we reverence them in all humility, saying with David.
Thou O Lord art just, and all thy judgments are true.
Not withstanding I am to believe, that the goodness of almighty God, is so passing great, and the love so immense which he beareth the elect, that he will not suffer Satan to sow among them this evil seed, unless he could, and would, draw from thence a greater good, nor yet permit that the enemy should sow within us, the evil seeds of his temptations, if he deſired not to convert them unto our profit.
And although in particular, I cannot obtain all these profits, yet may I come to understand them in general, believing that God permit evil men, to exercise the good, in patience, and humility to the end they should daily advance themselves in all perfection: next, to discover the efficacy of his grace, in the vessels of his mercy: next, that the good may be the more honored, manifesting their loyalty, among so many disloyal: and lastly to conserve the liberty of men, leaving every one to his own free will, yet giving sufficient force to reject evil, and to follow good.
Colloquie
O most just sower, who by a sovereign bounty sufferest in thy Church the Cockle of so many evils, and in my soul, the seed of so many strong temptations: grant that I convert not to my hurt, that do which thou permit for my good, manifest in me the greatness of thy mercy , drawing forth of so many evils, great abundance of many goods, to the end that by them thou maist be glorified, world without end, Amen.
Fr. Luis de la Puente
Email Post