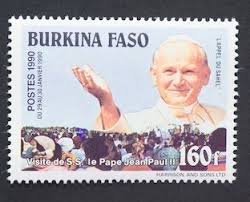 Following up Pope Francis Burkina Faso DOOM:
Pope Francis Burkina Faso DOOM! Military Coup! President Roch Marc Christian Kabor Ousted By Military dxv515 January 24, 2022
Took one month for more Pope Francis Burkina Faso DOOM.............
21 FEBRUARY 2022
Gold mining site blast reportedly kills 59 in Burkina Faso
OUAGADOUGOU, Burkina Faso (AP) — A strong explosion near a gold mining site in southwestern Burkina Faso killed 59 people and injured more than 100 others Monday, the national broadcaster and witnesses reported. The provisional toll was provided by regional authorities following the blast in the village of Gbomblora, RTB reported. The explosion was believed to have been caused by chemicals used to treat gold that were stocked at the site. “I saw bodies everywhere. It was horrible,” Sansan Kambou, a forest ranger who was at the site during the explosion, told The Associated Press by phone. The first blast happened around 2 p.m., with more explosions following as people ran for their lives, he said. Burkina Faso is the fastest-growing gold producer in Africa and currently the fifth largest on the continent, with gold being the country’s most important export. The industry employs about 1.5 million people and was worth about $2 billion in 2019. Source
Email Post