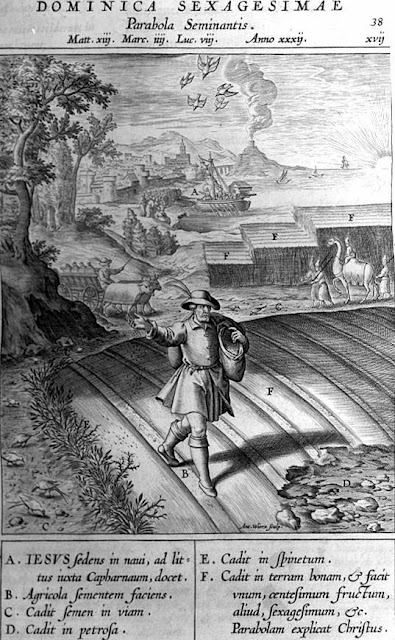 GOSPEL Luke 8:4-15
At that time, when a very great multitude was gathered together and hastened out of the cities, unto him, he spoke by a similitude. "The sower went out to sow his seed. And as he sowed, some fell by the way side. And it was trodden down: and the fowls of the air devoured it. And other some fell upon a rock. And as soon as it was sprung up, it withered away, because it had no moisture. And other some fell among thorns. And the thorns growing up with it, choked it. And other some fell upon good ground and, being sprung up, yielded fruit a hundredfold." Saying these things, he cried out: "He that hath ears to hear, let him hear." And his disciples asked him what this parable might be. To whom he said: "To you it is given to know the mystery of the kingdom of God; but to the rest in parables, that 'seeing they may not see and hearing may not understand.' Now the parable is this: The seed is the word of God. And they by the way side are they that hear: then the devil cometh and taketh the word out of their heart, lest believing they should be saved. Now they upon the rock are they who when they hear receive the word with joy: and these have no roots: for they believe for a while and in time of temptation they fall away. And that which fell among thorns are they who have heard and, going their way, are choked with the cares and riches and pleasures of this life and yield no fruit. But that on the good ground are they who in a good and perfect heart, hearing the word, keep it and bring forth fruit in patience."


In Catholic countries they use in the holy time of lent, amongst other holy exercises, (and as in deed and exercise to incite us to all other holy exercises) to hear sermons, at least three times a week, Sundays, Wednesdays, and Fridays, and in some Cities or great towns every day;  and that it might be more profitably be performed, to prepare us to the high Feast of Easter, the Feast of the death, and resurrection of Christ, the Church hath ordained, every day in lent, besides the Sundays, a several gospel accommodated to the course of the time; And upon this Sunday, being the next Sunday but one to lent, She hath very fittingly appointed this present gospel of the parable of preaching, or sowing the seed of Gods word, to be read, in the holy Service of the Church, and preached upon: to prepare us to the worthy hearing of the Sermons of lent and though she hath not commanded he lay, to come and resort to Sermons,as she hath preachers to preach: yet the one is inferred of the other, If the preacher be to preach; the people are to come and hear him; as we may and ought to infer of this: If the priest hath authority and commission from God,and in the name of God, to forgive men their sins, and not only to forgive, but to retain them (if he see cause) & he cannot judge, what sins to remit, and what not, unless he know them, and cannot know them, without they be confessed unto him: therefore the one,to wit, confession, is necessarily inferred of the other.

Though I say this argument were sufficient, to persuade people to be as diligent to come to Sermons, as the preacher to preach: yet in this parable, there is another thing to help to induce us,to wit, examples of those people, that came to hear the doctrine of Christ: which were so many in number, that the text calleth them a great multitude; and came with that zeal and fervor to hear him, that the text expresseth it not by an ordinary word, but that they pressed or thrust in upon him, as if they meant to apprehend him,as the soldiers did, when he came forth of the garden of Gethsemane, the night before his passion; saving that those came to catch him in his speech, these to be watched by his speech, as those that come to hear the word of God must desire to be.


So much concerning the seed.

Now concerning the sedan, and the ground, whether we take almighty God sowing the seed of his grace or of his word as the Author and Master thereof, to be the sedan; or the preacher that expondeth it; or ourselves by reading, study. meditation or the like, (for all these may aptly be said to be the seedman meant in this parable) still the ground is our souls, which must be prepared and disposed before, or they will either not receive it or also receive it in vain.

Amongst other dispositions of arable ground, those two are principle, that it be opened a convenient depth to receive the seed into the bowels thereof; and covered, that it may retain it and nourish it up.

The same are required in our souls, when we hear the word of God, namely to open them with diligent attention to understand, that we may receive it into the bowels of our souls; and an earnest love and desire to perform it.

Those two did Christ command unto us here, crying out loud (as the text saith) after he had proposed the parable, he that hath ears to hear, let him hear. Meaning he should be attentive to the parable to understand it, that so he might open his souls to receive the doctrine thereof, and obediently to retain and perform it, for so also hearing doth there signify, as it doth in diverse other places; without which, hearing is to no purpose: for as St. Paul saith, not the hearers, but the doers of the law shall be justified. And how important it is thus to do, if we will profit, appeareth by this. that Christ spake not these words with an ordinary voice, but crying them out loud as the Text expresseth.
: A Plaine Path-way To Heaven Thomas Hill 1634