Habsburgs Don't Live Here
FSSP Doesn't Say Mass Here
Now you see why I put the Hungarian Ambassador to the Holy See Eduard Habsburg on my list of Putin Worshipers?
The Diplomat sent out tweets complaining about the Fake News Reports coming out of the Ukraine. The Diplomat didn't say which source was fake. It was the Western Media that the Diplomat was complaining about. No harsh words for the invading Russians or the Mastermind Putin. No. The Diplomat was complaining about the Western Media.
And that's why I put  Eduard Habsburg on the list of Putin Worshipers
Some of you demented Putin Worshipers were upset that I added the Diplomat to the list, there was even a Tweet that has since been deleted that defended Habsburg's neutrality in the Ukraine Invasion after all it was pointed out that the Diplomat had to take the same position as the Hungarian PM Orban.
Oh and just what was the Hungarian PM Orban's  position on the Invasion of the Ukraine?
Here......
Hungary’s Orban criticized for ‘neutrality’ in Ukraine war
BUDAPEST, Hungary (AP) — Widely seen as Russian President Vladimir Putin’s closest ally in the European Union, Hungarian Prime Minister Viktor Orban has sought to assert Hungary’s neutrality in the war in Ukraine, even as his allies in the EU and NATO assist the embattled country and punish Russia for launching the largest armed conflict in Europe since World War II. Orban, who faces a difficult election on April 3, has refused to supply Ukraine with military aid — alone among Ukraine’s EU neighbors — and has not allowed lethal weapons to be shipped to Ukraine across Hungary’s borders. Arguing that providing such assistance to Ukraine would draw Hungary into the war, Orban — while avoiding ever mentioning Putin by name — has portrayed himself as the defender of his country’s peace and security while insisting that EU sanctions against Russia not be extended to its energy sector, of which Hungary is a major beneficiary. 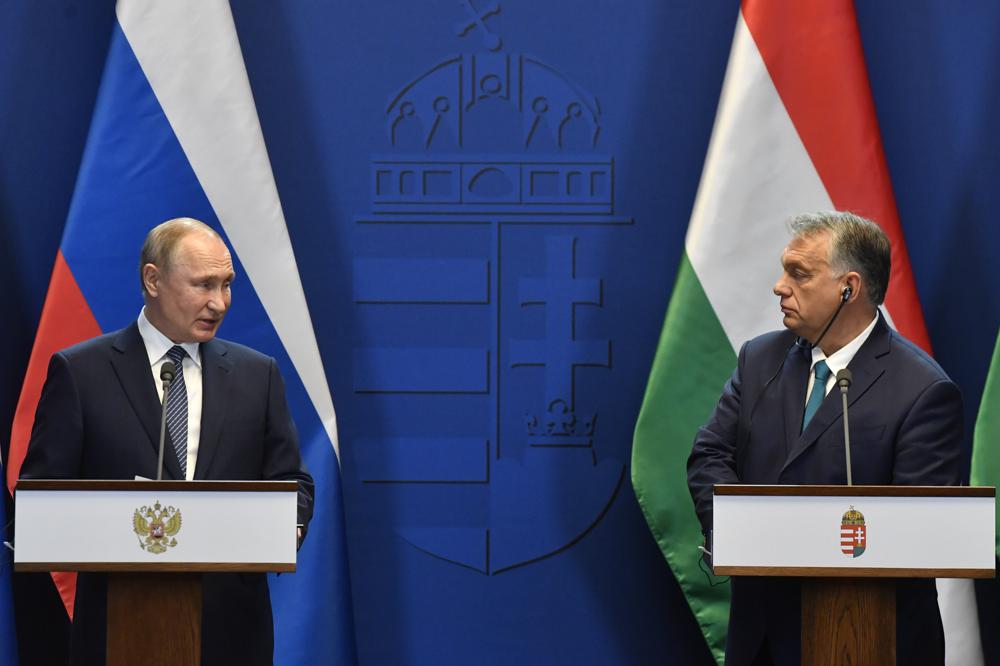 “The answer to the question of which side Hungary is on is that Hungary is on Hungary’s side,” Orban wrote Saturday on social media. While his approach has gained traction among many of his supporters, Orban’s reluctance to act unambiguously in support of Ukraine and his insistence on maintaining his Russian economic interests has led to frustration and outrage among other European leaders — not least the Ukrainian president himself. In a video address Friday to a summit of EU leaders, Ukrainian President Volodymyr Zelenskyy made a frank, direct appeal to Orban to take a clearer stance on Russia’s war on Ukraine and support his besieged country.“I want to stop here and be honest, once and for all. You have to decide for yourself who you are with,” Zelenskyy said. Zelenskyy recalled that Hungary’s capital of Budapest had experienced the horrors of war in the 20th century, and referred to a memorial of bronze shoes on the Danube river that pays tribute to the Hungarian Jews executed by German and Hungarian fascists in World War II. “Listen, Viktor, do you know what’s going on in Mariupol?” Zelenskyy said, referring to the Ukrainian city on the Sea of Azov that has undergone devastating Russian bombardment. “Please, if you can, go to your waterfront. Look at those shoes. And you will see how mass killings can happen again in today’s world. That’s what Russia is doing today.” Source
So yeah the FSSP Diplomat is a Putin Worshiper just like Orban.
So the FSSP Diplomat remains on the list....
Please note - FSSP has influenced all of those listed below in one form or another. Not every one listed currently attends FSSP Chapel. Many of you who object to being on this list do so because you don't want to be accused of being FSSP but none of you object to being accused of being a Putin Worshiper. Which I find hilarious. So it looks like FSSP chapels are Propaganda Centers for Putin.
The whole point which is lost on all of you is this - if you worship Putin then you will one day worship the Forerunner to the Antichrist as Our Lady of La Salette and Our Lady of Fatima have foretold.
"A forerunner of the Antichrist, with his troops drawn from many nations, will wage war against the true Christ, sole Savior of the world; he will shed much blood and will seek to annihilate the cult of God so as to be regarded as a god." Our Lady of La Salette 19 Sept. 1846 (Published by Mélanie 1879)
I just added Cardinal Burke! LOL! Heads will explode!