+IHS PASSION OF OUR LORD: The Seventh Meditation Of The Coming Of Judas With The Soldiers 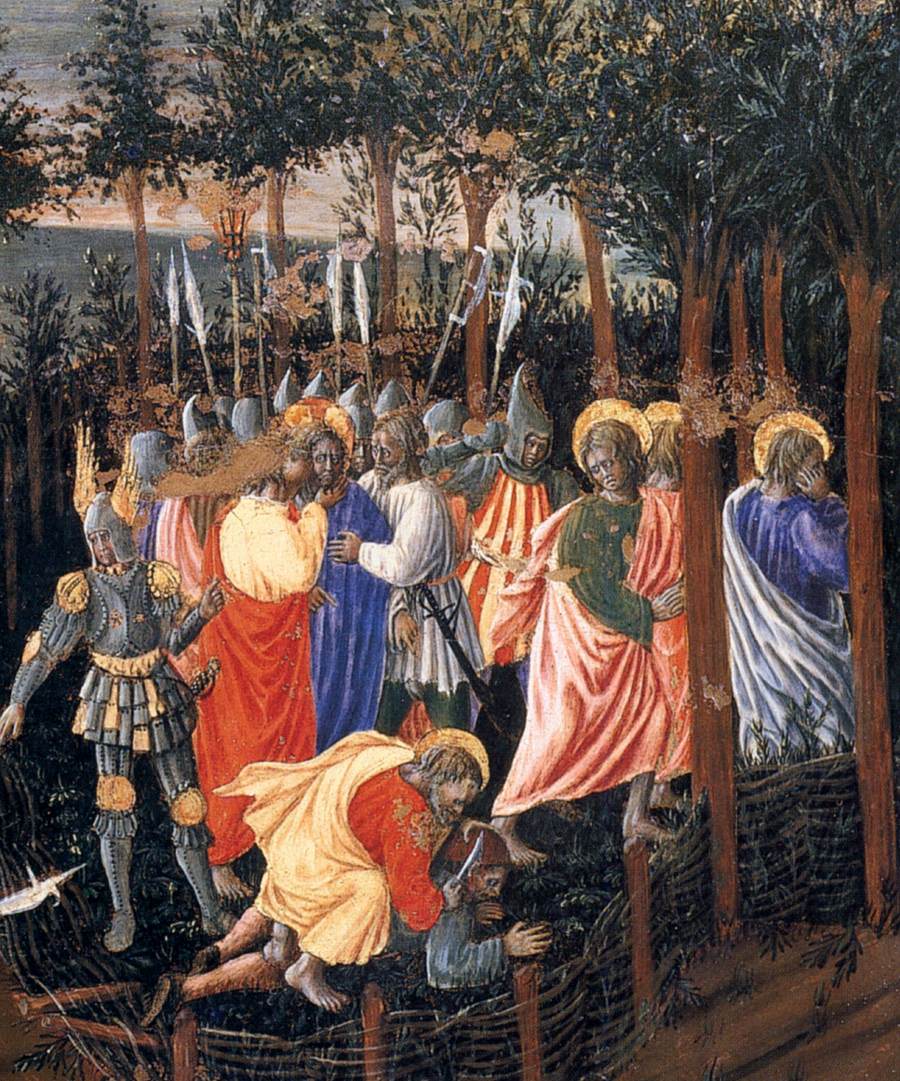 Then he cometh to his disciples, and saith to them: Sleep ye now and take your rest; behold the hour is at hand, and the Son of man shall be betrayed into the hands of sinners. Rise, let us go: behold he is at hand that will betray me. Mt.xxvi.

Consider first that Christ having three times visited his Apostles, and found them sleeping, did the first time reprehend them, the second time held his peace, and the third time bad them sleep on: That thou mayest learn to bear with the infirmity of another. Secondly to assent presently to divine inspirations; for if Christ perceive that thou dost contemn his admonitions, he will afterwards hold his peace, and more sparingly suggest these things, which tend to thy salvation. Thirdly that when thou hast begun any good work, thou shouldest not waver, nor change thy mind: for Christ after he had subdued the inclination of nature, & had resolved even against nature to die, did not at any time after, show any sign of sorrow, inconstancy, or doubt.

Consider secondly that Christ framed himself to take a little rest or sleep with his Disciples, but that could neither be great, nor long, especially in a man so over wearied, & shortly after to be apprehended.

Consider thirdly this word (it suffereth) as though he taught us to use a mean or a measure in our rest and human commodities.

Consider fourthly that this word (behold) is twice repeated because it was a strange thing that any man could be found, which would betray the Son of God & man.

Consider fifthly (Arise let us go) It is not enough for thee, if thou doest not sleep, when God's glory is in hand; but thou must arise, go forward, & prevent evils,  suffer all adversities courageously for Gods cause.

Here shake off thy sleep, and pray unto God, to stir thee up effectually to labor for his names sake.

And Judas also, who betrayed him, knew the place; because Jesus had often resorted thither together with his disciples.Jn.xviii.

Consider first that Judas had no need to be warned to watch; for it happeneth commonly, that when mischief is to be doe, wicked men never sleep.

Consider secondly (behold Judas one of the twelve) It is strange thing, that he who had received so great a benefit at Christ his hand, could ever come to that malice, and ingratitude, that he would betray his Lord & benefactor. Thous mayest learn hereby not to trust in gifts freely bestowed upon thee, but how much the more God hath bestowed upon thee, so much the more to fear, because God in the hour of death will weigh all his gifts, as the Scripture here with great emphasis saith.(Behold Judas one of the twelve)

Consider thirdly that an evil man fearth not to abuse good things as Judas came to the place of the prayer of Christ to betray him: how much better had it been for him to have left his treason, & to have joined himself with Christ & his Apostles in prayer.

Consider fourthly that the knowledge of many, yea of divine things, shall not help a wicked man, but rather shall condemn him, even as it did not help Judas to have known Christ, and the time & place of the prayer of Christ &c. In this place if thou doest consider thine own ingratitude, who having received many good benefits, doest restore nothing but wickedness, thou wilt admire & detest thy self, & thou wilt pray unto Christ not to suffer thee to perish with wicked Judas.

Judas therefore having received a band of soldiers and servants from the chief priests and the Pharisees, cometh thither with lanterns and torches and weapons.Jn.xvii

Consider first what a great company of men assembled together to apprehend Christ: First a company of Gentiles, with their tribune, perhaps five hundred soldiers; then no small number of the ministers of the Jews, with some of the chief priests, Seniors, and Magistrates of the people: there were therefore two companies, one of Gentiles, and another of Jews, armed with sundry weapons, & prepared to hurt: the ring-leader & captain of all these was he (who was called Judas) that is that famous Judas, who was known to all those Jews and Gentiles.

Consider secondly what they talked among themselves as they came, what minds they bare towards Christ, & how they thirsted after his blood.

Consider thirdly this title of  Judas (who was called Judas) that is, he which a little before was known to the Disciples, and to good people, when by the commandment of Christ he distributed the alms, when he wrought miracles, when he followed Christ, he is now renowned amongst knaves, and famous among thieves. Be thou careful to celebrate thy name in Heaven, rather then in the world or in hell.

Consider fourthly what a grief it was to Christ, to see him, who was one of the principal of the Church to become chief among knaves & do thou take heed, lest by the like change of thy self, thou givest him cause of sorrow, by falling from being the son of God to be a slave unto the Devil; and pray with all thy heart, that it never happen unto thee.