MEDITATIONS Of THE PASSION: Fourteenth Meditation How Chriſt Our Lord Was Sent From Annas To Chaiphas. 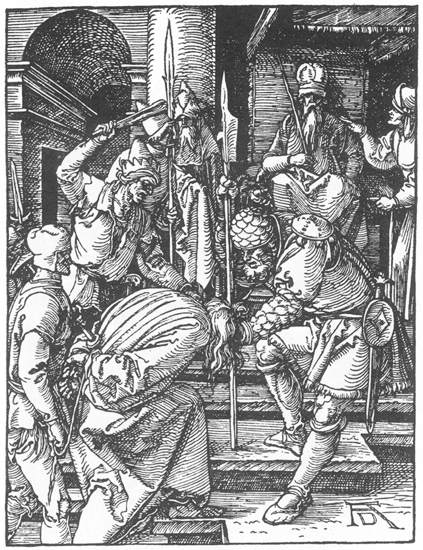 DÜRER, Albrecht
Small Passion: 12. Christ before Annas
1511
THE XIV. MEDITATION.
How Chriſt Our Lord Was Sent From Annas To Chaiphas.
GOSPEL.
Then they which held Jesus, sent him to Caiphas the high priest, where all the Priests & the Scribes and Ancients were assembled together and Peter followed him afar off even unto the court of the high Priest, & going in he sat with the servants at the fire that he might see the end. And the chief Priests and the whole Councel sought false witness against Jesus that they might put him to death, and they found not, for many spake false witness against him, and the testimonies where not convenient: and, last of all there came two false witnesses,& they said we have heard him say, I will dissolve this temple made with hand, and in three Days I will build another not made with hand, and their testimony was not convent. The high Prieſt therefore rising up asked of Jesus, saying unto him answered thou nothing to these things that are objected to thee of these? but JESUS held his peace, and answered nothing.
A FIGURE.
The principal persons of Israel, by commandment of Queen Jezabel brought forth two false witnesses againſt Naboth a just man, to condemn him to death. 3.Reg.21
PROPHESIES.
1. False witness rising against me asked me of those things which I knew not. Psal.34.
2. The sinner and the fraudulent person have opened their mouths, and have spoken against me with deceitful tongues. Psal. 103.
3. I have redeemed them, and they have spoken falsely against me. Ose.7
4. I am made like to a man that heareth not, and have not what to answer unto the things which they object against him.  Pſal.37
5. I will make thy tongue to cleave to the roof of thy mouth and thou shalt be dumb & like to a man which  knoweth not how to reprehend because this is a people which provoketh my anger. Ezec.3
CONSIDERATIONS.
1. ANNAS sent CHRIST as worthy of death unto CAIPHAS as the chief Priest. Follow now O my soul  thy Spouse, who to espouse him self unto thee hath taken and supported for thy love all these labors and travails: Consider this mournful procession, and see with what inhumanity and cruelty those sons of the Devil do lead or rather haul or draw the most meek Jesus. The Scribes & Pharisees together with those wicked Ancients were assembled in the house of Caiphas, full of wrath & disdain, and swollen with pride and envy against our Savior, and because they were assembled in the name of Satan to shed the innocent Blood of Christ, therefore in the midst of them was also that malign spirit, which egged them forward to all cruelty and malice. Consider how he being come amongst them, with what despite they received him and with what terrible eyes they beheld him: O how greatly did those proud harts rejoice, to see our Savior stand before them so much abased and dishonored, disdaining for to speak unto him save with sharp & injurious words
2. Consider how the God of Majesty, stood in manner of an innocent lamb in the midst of that maligne  COuſle
THE PRAYER.
DOCUMENTS
Fr. Vincenzo Bruno S.J. 1599
Email Post