+IHS PASSION OF OUR LORD: THE 33. MEDITATION OF THE crucifying of our lord. 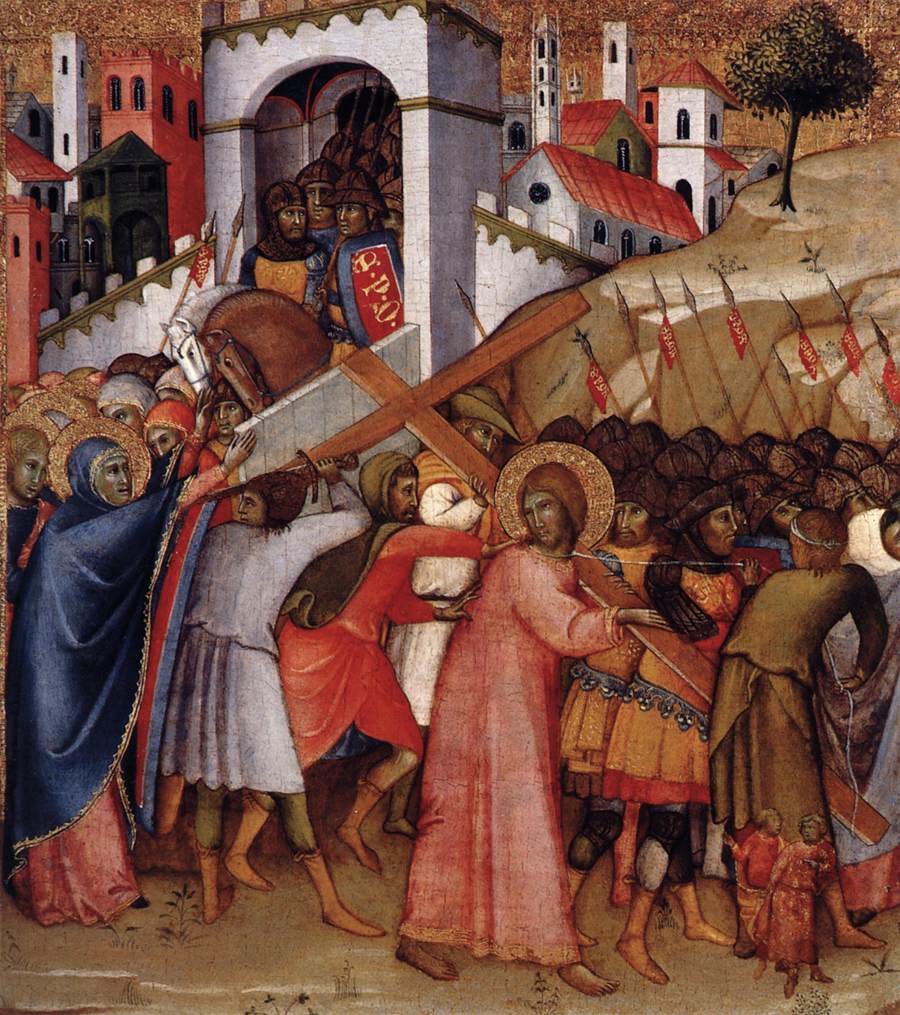 ANDREA DI BARTOLO
Christ on the Road to Calvary
1415-20

And they came into the place, which is called Golgotha, which is a place of Calvary: and they gave him wine to drink mixed with mirth gall: and when he had tasted, he would not drink: and it was the third hour.

Consider first, the ascending of this hill, how painful it was unto thy Lord, how he enforced his tender and consumed body, that it should not fail to procure thy salvation, but that in the mountain nearer unto heaven he might stand before God the Father, and offer Holocaust as a savor of sweetness for thy sins. Follow thou the Lord ascending his hill as near as thou canst, and stand by him in this hill even until death. Consider secondly, how the executioners made ready the Cross: how they bored the holes for the nails, and prepared nail, hammers, and ropes; thy Lord beholding them with his eyes. Do thou also behold them, and lament, and bear; because thou doest prepare a Cross for thy Lord, as often as by thy sins thou deserves a place in hell for thy soul, which is created to his own likeness.

Consider thirdly, that according to the custom of such as were put to death, they offered a cup to Christ, but much differing from that was used to be given to others. The drink was mixed with wine, Myrre, gall, and vinegar (for St. Matthew useth instead of wine this word: Vinegar) that none of his senses should want his pain and punishment. His cruel enemies compass him round about, troubled his sight; their cruel words, upbraidings, and blasphemies tormented his hearing; the stench of the place, and of the filth, which covered his face, offended his smelling; his touching suffered most grievous pains all over his body; and because no sense should be without his torment, this most bitter drink was given him to afflict his taste. Is it not reason then ( thinkest thou) that thou shouldest suffer some afflictions, or trouble for thy Lord, which for thy sake had no part of his body free from pain? But Christ tasted this foul potion for thee, to draw from thy soul to his own body all the sharpness and bitterness of thy sins; and left for thee sweet wine, mixed with no sourness, that is to say, the grace of God, and a pure and quiet conscience.

Consider fourthly, When he had tasted, he would not drink: for Christ took upon him thy sins in his body as in his mouth, but he polluted not his soul with the filth of sin: that thou also shouldest as it were taste the malice of sin with the sourness of penance, but by no means suffer it to enter into thy soul.

Consider fifthly, that the hour of his execution is noted, to wit, the third hour, which in the Equinoctial is from None of the clock in the morning till twelve at noon: whereby thou mayest note the great hast, which they made, partly least Pilate should change his mid, and partly least Christ should die before he was crucified. Saint John writteth, that the sentence was pronounced almost at the sixth hour, that is a little before noon: And Mark affirmeth that Christ was crucified the third hour, that is, before the clock had struck 12. Consider then what hast was made, how cruelly thy Lord was pulled, drawn with ropes, and whipped forward. Take heed, least they feet run unto sin, but run cheerfully this way of our Lord, and casting away all impediments, fly unto the cross of Christ, and pray him to remove all sourness & difficulties from the exercise of virtue.

And there they crucified him.


Consider first, that the Apostles did not express so great an action in many words, which thou mayst easily understand, both by the accustomed punishment of the Cross, and by the hatred of the Jews, and by the ancient oracles of the Prophets. For first they pulled of his garment with great insolence, & renewed the wounds, sticking unto it, making his sacred body bleed, and appear all naked. Secondly, they outrageously threw him down upon the cross, which lay on the ground, thinking it sufficient if he were nailed alive on the cross. Thirdly, they pulled one hand to the hole, which they had bored, and draw a nail through it with a hammer; and the blood issued forth abundantly, according to the old figure: They struck the Rock, and the waters flowed out, and the Rivers swelled up. Fourthly, when on hand was fastened, they took the other, and stretched it to the other hole, which being far distant, they pulled it, either with they hands, or with cords, with all their force; and that being also fast nailed, they came to the holes for his feet, and with great violence they brought his holy feet unto it, and (as St. Cyprian saith) fastened them with nails. David did plainly fore show this stretching forth of our Lord in these words; I am spread abroad like water: I am wasted and decayed with the extremity of pains, and destitute of all strength, like water poured out, having no power to stay in any place. All my bones are dispersed, that is, are loosened, & pulled out of their places, the cold, dryness, and extension upon the Cross dissolving all the joints of my members. They have dogged my hands and my feet, they have numbered all my bones: so cruel was this extension of his members, that every bone, being pulled from another, might easily be seen. Thirdly, they lift up on high the tree of the Cross, clothed with this solemn host; and let it fall down with great violence into the hole, which they had rigged for it: For so was the brazen Serpent lift up in the wilderness, & the host of the Sacrifices were won’t to be offered unto God by lifting them up on high. In all these things do thou ponder and think upon the most bitter torments of thy Lord; behold the banner of the Cross lift up; look upon the streams of blood running down from his hands & feet; go quickly and draw whilst the springs are flowing, and before their veins be dried up.

Consider secondly, why thy Lord close this death of the cross for thy salvation, and no other death. There are many causes thereof.First, because there was no death more long, more grivious, more ignominious, nor more proper and fit for the procuring of thy salvation. For he would not have his body divided; that the Church his mystical body might be preserved whole. He would not be burnt, with any other fire, then the fire of charity: He would not be strangled with a halter, drowned with water, or smothered with earth, least he might seem to have retained something to himself, and not to have shed all his blood most liberally for thy sake. Secondly, that being lift up on high, like an host, he might place himself , as a Mediator, between God the Father and mankind, Being the only Mediator of God and men, reconciling the lowest things to the highest. Third, to throw down the Devils, the Princes of the air, quite out of the air into Hell; or at the least to subdue their forces. Fourthly, that he might see thee with his eyes a far off, draw thee unto him with the chains of his blood, recived thee at thy coming with his arms spread. show thee his inward parts, and hide thee in his wounds, bind thee unto him with the links of Charity, have thee, engraved in his hands, always before his eyes, keep thee imprinted in his heart, and with his feet fastened to seek nothing but thy salvation. Fifthly, that thou shouldest no more fasten thine eyes upon the ground but lift them up on high, behold him a far off, run unto him, require of him thy salvation, and all good things, think upon him always in all thy business, follow his life, and fulfill his Commandments. Here of thou speak, whats ever thy spirit shall put into thy mouth.