+IHS PASSION OF OUR LORD: THE 39. MEDITATION OF the third word of christ 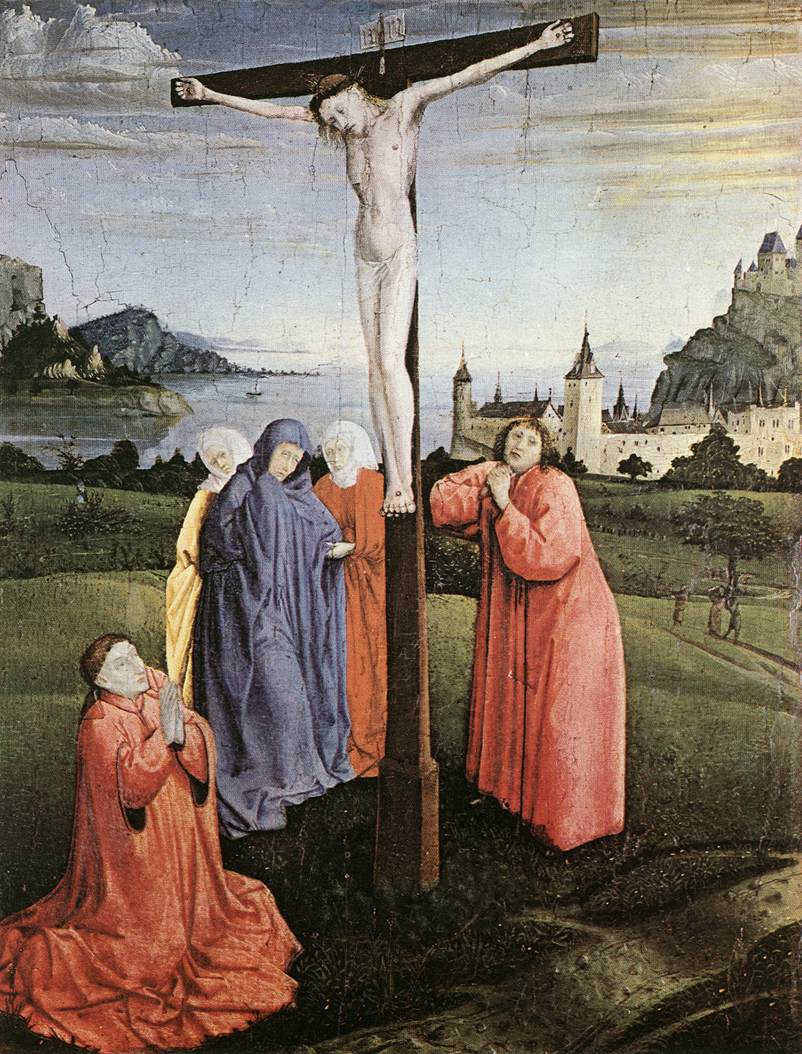 Pasſion of Chriſt. 463 of the Virgin, and given by the Virgin to subdue the power of the Devil, did bruise the head of the Serpent. Fourthly, that we might know the cooltancy of his Mocher, to whom the pro- pleſie of Sa'omon agreed : who 1.2ll finde a valiant wo- Pro, 31. man ? Behold: it is not (faith he ) an equall change to take the Son of man for the Son of God; or the Son of a Fisher-man for the Son of so great a King: but the quifte ought to be free, both because it was of necessity, and because it came from the Son; and alſo because in him all man-kind was commended. Son: I have hitherto loved this John, and X4 in of the ha M. The Ifo. in him all Chriſtians; I have counced them iny children;] hauc provided for them as for children; and I have fed them with my fcfh & blood. Therefore, O my Mother, do thou account thein as thy children for my fake. Thy: so love thein, as if thou hadft borne chein in thy womb. This recommending of the Son was of great force with the Mother. Be thou therefore confident in the benignity of this Virgin, and fly unto her,  as unto thy niother in all thy necessities.

III
Then he said to his Disciple, behold thy Mother, and from that hour the Disciple took her his own.
Confider First, that John, who for love of Christ had forsaken both Father and Mother, had he a far more worthy mother given unto him: for so our Lord had said He shall receive a hundred fold.
Consider secondly, that virginity and all chastity is cómnended by our Lord, and that the wantonness of the flesh is repressed through the passion of Christ, and the help of the Mother of God.
Consider thirdly, the piety of Chriſt towards his Mother ; that through the grace of Chriſt thou mayett obta'ine the guift ofpiety towards God and thy Parents.
Conſider fourthly, the words of our Lord. Behold: a great bencfice, that he God and man fhould both have one parent, Mother : whom thou may ít rcuerence, louc, and defend; to whom thou mayeit flyc; in whoinc thon ir.aycît baue hope; who ſhall be a Mediator between me, and you my Children, by whome I will accept your prayers, Thy: ſhe is not only patron of all mankind, but of thecalſo, as ſhe that lovech thee, and gave her only begotten Son to dye for thee, suffering him to be crucified, whipped, mocked and liainc for thee.
Conſider fiftly, that John being poor, who had forsaken all, and vowed poverty with the rest of the Apostles, and had left himself nothing, received this new Mother, not into his houses, lands, or possessions, but into his dutiful care, service, and protection, Therefore he took care for her, that she should want nothing, providing sufficiently for her out of the alms of Chriſtians. Pray thou our Lord to command his Mother, to be also thy Mother, that thou may defend her honor, increase her glory, and standing with her by the Cross, may receive the gifts and benefits of the Cross.
~ Fr. Francois Coster S.J.
Email Post