Of The Condemnation Of Christ 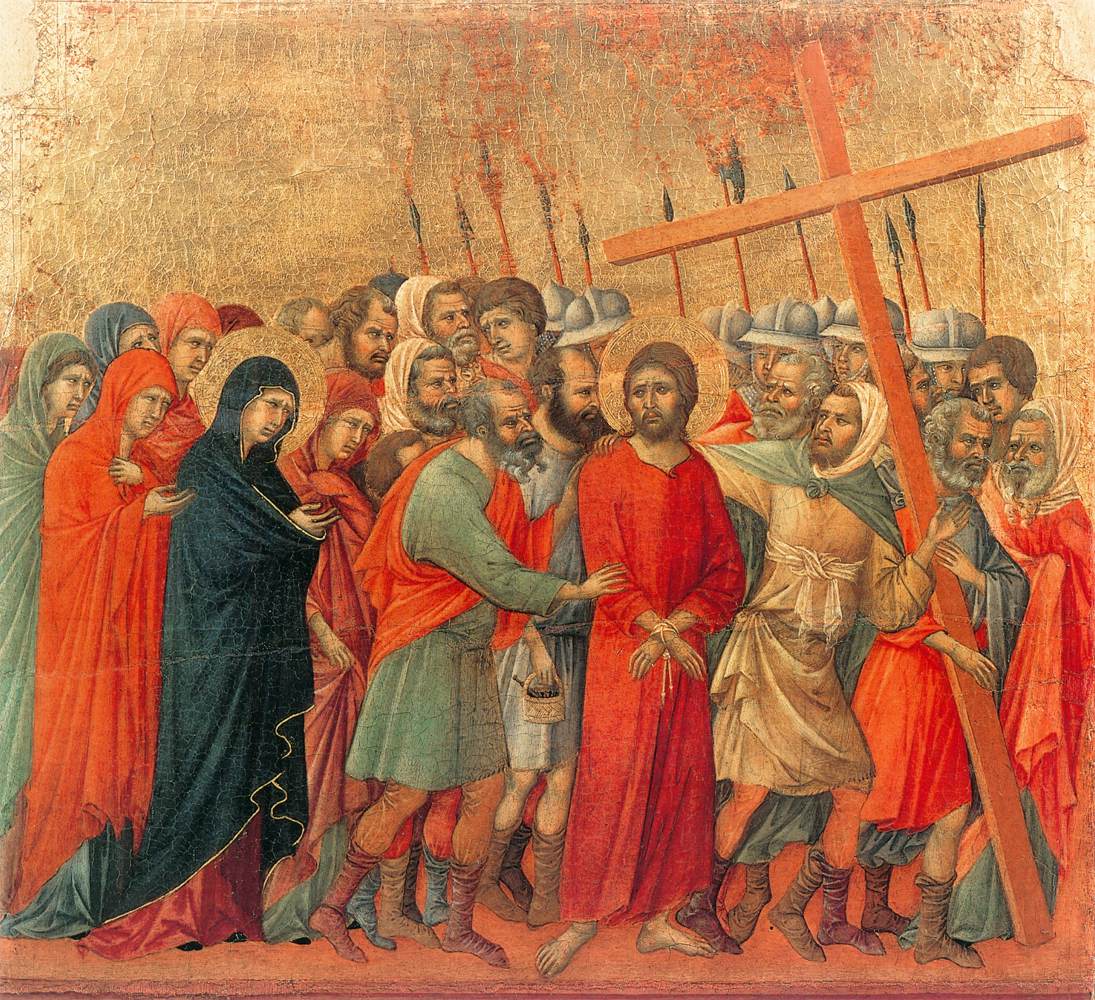 DUCCIO di Buoninsegna
Way to Calvary (scene 19)
1308-11
The 30 Meditation of the condemnation of Christ.

And Pilate seeing, that he profited nothing, but that the tumult was made grater,taking water,washed his hands before the people, saying: I am innocent the blood of this just man; Look yes to it.


Pilate who was a Heathen, being moved with the touch of conscience and reason, and desirous to dismiss Christ uncondemned; the Jew begin to mutiny. Consider therefore, first, how much that afflicted the mind of Christ, that a Heathen, being a stranger from the knowledge of God, and from the Sacraments, should be carful for his delivery; and they, upon whom God had bestowed the knowledge of himself, and honored them with many Sacraments, should so tumultuously labor to have the sentence of death pronounced against him. Learn, not to marvel, if some things happen unto thee, contrary to equity and reason.

Consider secondly, that the wicked do mutiny. For even as Hell is replenished with tumult and horror: so all things, which are suggested by the Devil, are referred to tumult and perturbation, either outwardly amongst the Citizens, or else inwardly in mens minds.

Consider thirdly the ceremony of Pilate, who washed his hands with water, but did not wash away the guilt of conscience, for sins are not purged with outward water, but with tears. Do thou apply this water of tears to thy sins already past; but do not use them, to the end thou mayest sin more freely. For as all sins committed may be cleansed by tears and penance: so there is nothing, which can give liberty to sin.

Consider fourthly the words of Pilate: (I am innocent) He thinketh himself innocent, because he condemned him against his will. But he cannot be innocent, which sendeth Jesus to the Cross. with the same lips, by which he had pronounced him innocent before. Thou earnest also, that they are like unto those Jews, which will never take any warnings, nor be moved with any reasons. And they imitate the sin of Pilate: First, which sin against their own conscience at the request of others. Secondly, which under any pretense excuse themselves, and lay the blame upon others, Thirdly, which cover the wickedness of their mind with any color of good. But see that thou doest use this word of Pilate more warily to thine own benefit: O lord, let me be innocent by the blood of this just man. For seeing he only is just, and our true Justice, nothing can bring me innocency of my soul, but by the blood of this just man, shed for justice, for the remission of sins.

And the whole people answered, saying: His blood be upon us, and upon our Children.


Consider first the blind fury of envy: They do not deny him to be just, but whatsoever he be, they demand him to be crucified: and yet they may give courage to the fearful President, and hasten the death of this just man, they bind themselves & their posterity to most grievous miseries. This word wounded the heart of Christ our Lord, by which the people of God, who should have been delivered by his blood, desired the revenge thereof to light upon themselves.

Consider secondly, how great folly it is, to wish for that evil, whereof thou knows not the greatness. For if every sin deserved a great & grievous punishment, for the eschewing whereof this blood was shed; oh what a Hell is due for that sin, by which this blood was shed? They are like unto these bloody Jews, First, who nothing esteeming the future pains of hell (the greatness whereof they know not) continue in offending God with their sins. 2. Which undertake difficult matters without consideration. 3. Which load themselves with other mens sins, not weighing what will follow.

Consider 3. the bounty & goodness of God, who as according to the desire and request of Pilate he spared the Gentiles, so he dealt less severely with the Jews, then they required: for he received even many of them into favor and grace, & brought many thousands, of their posterity into faith & salvation. Do thou take heed, least thou through thy sins be guilty of the body & blood of our Lord: but pray that his blood may be upon thee and thy children, for thy salvation, and the remission of thy sin.

Then Pilate willing to satisfy the people, adjudged, that their petition should be done: and he dismissed unto them him, which was sent to prison for murder and sedition, Barrabas, whom they demanded: but Jesus being whipped he delivered to their will, that he should be crucified.


Consider first, that the Priest sinned in the death of Christ of envy; the people, through the persuasion of the Elders; Pilate, to satisfy the people. None was free from sin: for the first sinned of malice, the second of ignorance, the third of fraility. For Christ underwent the punishment of the Cross for all sorts of sinners whatsoever.

Consider secondly the manner of his condemnation, never used before: for First, omitting all crimes, for which he ought to be condemned, he was pronounced, just, by the judge himself: I am innocent (saith he) from the blood of this just man: as if he should say, who is not condemned for his faults, but for his justice. Secondly, a guilty person, loaded with most grievous crimes, is let go, that the just man may be condemned: for our lord died to this end, that he might by his death deliver all sinners from eternal death. Thirdly, he was not only adjudged after the accustomed manner to the Cross, but also to be tortured upon the Cross, according to the will of the Jews. For these are the words: he delivered him to their will, that he should be crucified. For he would be delivered wholly to the will of the wicked, that thous shouldest yield thyself entirely to his will. Pray therefore unto thy Lord, not to deliver thee to the will of thy enemies, but that through this most unjust sentence of his death he will deliver thee from the just judgment of everlasting death.\