Pro-Putin Cardinal Burke Banned From The Vatican For His Pro-Russian Stance.... 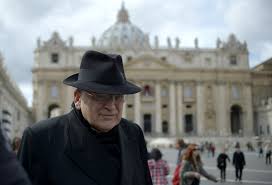 Cdl. Pietro Parolin, personally intervened to bar Cdl. Raymond Burke from entering Vatican offices over Burke's conscientious objection to the abortion-tainted COVID-19 vaccine.....Sources at the Congregation for the Causes of the Saints told Church Militant that Burke, a member of the Supreme Tribunal of the Apostolic Signatura, was recently stopped at the entrance to the building because he did not possess a Green Pass.  Source

If it is true that Burke was turned away then it could be for something else like his Pro-Putin stance.

Italy has already lifted the Green Pass rules for visiting museums as of March 31st 2022.

Not one word from the outspoken Cardinal condemning the Russian Invasion of the Ukraine.

No bad words for Putin?

That's why this cardinal was banned from the Vatican. Because of his Pro-Putin nonsense.

And that's why this cardinal is at the top of the list of Putin Worshipers....

Here is a list of demented FSSPers who worship Putin