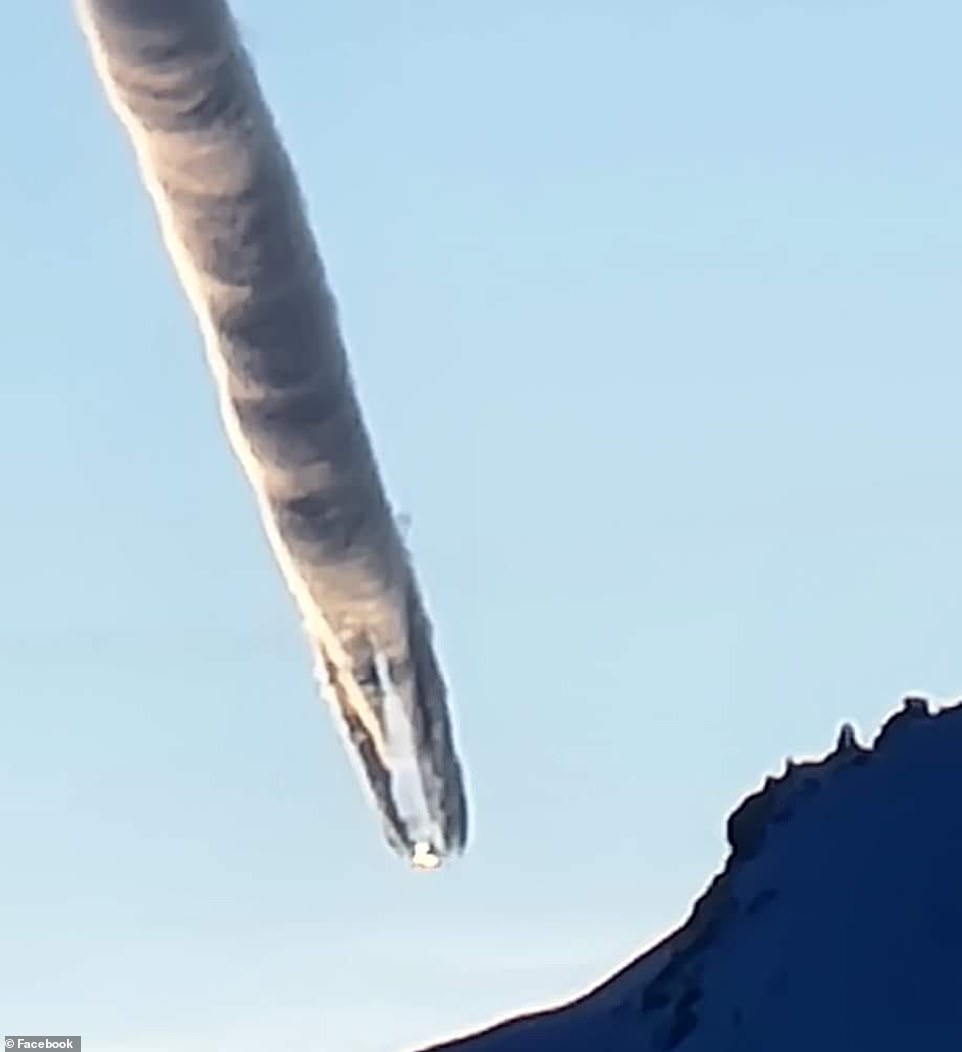 "Nothing under the sun is new, neither is any man able to say: Behold this is new: for it hath already gone before in the ages that were before us." Ecclesiastes 1:10
For the time has come when the most astonishing wonders will take place on the earth and in the air. Our Lady of La Salette 19 Sept. 1846 (Published by Mélanie 1879)
Voices will be heard in the air. Men will beat their heads against walls Our Lady of La Salette 19 Sept. 1846 (Published by Mélanie 1879)
“The demons of the air together with the Antichrist will perform great wonders on earth and in the atmosphere, and men will become more and more perverted. Our Lady of La Salette 19 Sept. 1846 (Published by Mélanie 1879)
Our wrestling is not against flesh and blood; but against Principalities and Powers, against the rulers of the world of this darkness, against the spirits of wickedness in the high places. Ephesians 6:12
Did a plane crash into Lazy Mountain? A meteor? Troopers say no, it’s a contrail

According to the Department of Public Safety, the spectacle in the sky on Thursday morning over Lazy Mountain was a unique combination of contrails from a passing jet, atmospheric conditions, and the rising sun. Photos circulated on social media, as people in the Mat-Su Valley wondered about what appeared to be a strange trail of smoke with dark portions that appeared to be debris from something.  “The Alaska State Troopers and our partners at the Alaska Rescue Coordination Center investigated the Lazy Mountain photos and video that were reported to the Alaska State Troopers and have also been circulating across social media this morning. There have been no reports of overdue aircraft or ELT activations indicating an aircraft crash. A rescue team on a helicopter flew a mission around the Lazy Mountain area this morning and located nothing suspicious and there were no signs of crashed aircraft.”  There have been no reports of any audible impact, either, but plenty of speculation on social media, along with some political jokes on the Must Read Alaska Facebook page, including one that said “It’s Biden’s winter of death coming for us.”  “Further investigation revealed that a large commercial jet was flying in that area around the time that the photos and video were taken. The aircraft was contacted and reported normal flight operations on its way to JFK airport in New York. Troopers believe that the photos and videos showed a contrail from the commercial jet combined with the rising sun which together caused the unique atmospheric sight,” Troopers wrote. “We greatly appreciate the numerous Alaskans that reported the suspicious sight this morning to law enforcement.” Source

CONTRAIL
UAPs UFOs
What is it?
Nothing new under the sun.
St Basil the Great tells you what UAPs & UFOs actually are - DEMONS of our Lower Atmosphere:
Saint Basil also, on Isaiah x, writes that the bodies of Demons are sometimes of air and sometimes of fire, and often compounded of both these elements: there can, indeed, be no doubt that the Demons take upon themselves just that kind of concrete body which answers the particular purpose which they have in view; and their different shapes and appearances may be said to be as limitless as those adopted by Proteus in his various forms. For just as the exhalations of the earth form themselves into clouds which, when shaken by the winds, take an infinite variety of shapes; so also do the Demons, by means of their fluency and rapid dexterity, shape their bodies from a concrete condensation of air and vapours into whatever form they desire.
S. Basil again, on Isaiah ii, says that they often freakishly infest men in the form of a cat or a fly or a dog; Tamblicus (De Mysteriis Aegyptiorum: and Psellus (De Daemonibus) write that it is not possible to compute the various forms in which they busy themselves: for now they will confine themselves within the very smallest of bodies, and now dilate themselves into monstrous size; sometimes they appear as men, sometimes as women; they will roar like lions, or leap like panthers, or bark like dogs; and at times will transform themselves into the shape of a wineskin or some other vessel. Alvarado a Minues, Oviedo, and those who have written of the customs of the West Indians, testify to very frequent meetings with Demons appearing now in the shape of one animal, now in that of another. And here it is worth while to set down the various shapes and forms in which they have manifested themselves to the witches of our own time. DEMONOLATRY BK.I. CH.III. NICOLAS REMY  1595

************
Here read from St. Thomas Aquinas on where Demons reside...
Article 4. Whether our atmosphere is the demons' place of punishment?
Objection 1. It would seem that this atmosphere is not the demons' place of punishment. For a demon is a spiritual nature. But a spiritual nature is not affected by place. Therefore there is no place of punishment for demons.
Objection 2. Further, man's sin is not graver than the demons'. But man's place of punishment is hell. Much more, therefore, is it the demons' place of punishment; and consequently not the darksome atmosphere.
Objection 3. Further, the demons are punished with the pain of fire. But there is no fire in the darksome atmosphere. Therefore the darksome atmosphere is not the place of punishment for the demons.
On the contrary, Augustine says (Gen. ad lit. iii, 10), that "the darksome atmosphere is as a prison to the demons until the judgment day."
I answer that, The angels in their own nature stand midway between God and men. Now the order of Divine providence so disposes, that it procures the welfare of the inferior orders through the superior. But man's welfare is disposed by Divine providence in two ways: first of all, directly, when a man is brought unto good and withheld from evil; and this is fittingly done through the good angels. In another way, indirectly, as when anyone assailed is exercised by fighting against opposition. It was fitting for this procuring of man's welfare to be brought about through the wicked spirits, lest they should cease to be of service in the natural order. Consequently a twofold place of punishment is due to the demons: one, by reason of their sin, and this is hell; and another, in order that they may tempt men, and thus the darksome atmosphere is their due place of punishment.
Now the procuring of men's salvation is prolonged even to the judgment day: consequently, the ministry of the angels and wrestling with demons endure until then. Hence until then the good angels are sent to us here; and the demons are in this dark atmosphere for our trial: although some of them are even now in hell, to torment those whom they have led astray; just as some of the good angels are with the holy souls in heaven. But after the judgment day all the wicked, both men and angels, will be in hell, and the good in heaven.
Reply to Objection 1. A place is not penal to angel or soul as if affecting the nature by changing it, but as affecting the will by saddening it: because the angel or the soul apprehends that it is in a place not agreeable to its will.
Reply to Objection 2. One soul is not set over another in the order of nature, as the demons are over men in the order of nature; consequently there is no parallel.
Reply to Objection 3. Some have maintained that the pain of sense for demons and souls is postponed until the judgment day: and that the beatitude of the saints is likewise postponed until the judgment day. But this is erroneous, and contrary to the teaching of the Apostle (2 Corinthians 5:1): "If our earthly house of this habitation be dissolved, we have a house in heaven." Others, again, while not admitting the same of souls, admit it as to demons. But it is better to say that the same judgment is passed upon wicked souls and wicked angels, even as on good souls and good angels.
Consequently, it must be said that, although a heavenly place belongs to the glory of the angels, yet their glory is not lessened by their coming to us, for they consider that place to be their own; in the same way as we say that the bishop's honor is not lessened while he is not actually sitting on his throne. In like manner it must be said, that although the demons are not actually bound within the fire of hell while they are in this dark atmosphere, nevertheless their punishment is none the less; because they know that such confinement is their due. Hence it is said in a gloss upon James 3:6: "They carry fire of hell with them wherever they go." Nor is this contrary to what is said (Luke 8:31), "They besought the Lord not to cast them into the abyss"; for they asked for this, deeming it to be a punishment for them to be cast out of a place where they could injure men. Hence it is stated, "They [Vulg. 'He'] besought Him that He would not expel them [Vulg. 'him'] out of the country" (Mark 5:10).