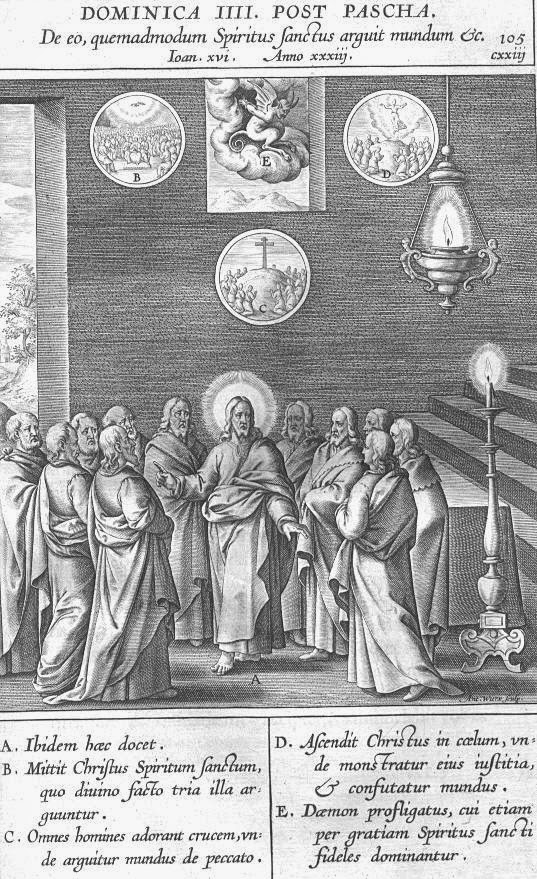 
At that time Jesus said to His disciples: I go to Him that sent Me: and none of you asketh Me: Whither goest Thou? But because I have spoken these things to you, sorrow hath filled your heart. But I tell you the truth: it is expedient to you that I go: for if I go not, the Paraclete will not come to you: but if I go, I will send Him to you. And when He is come, He will convince the world of sin, and of justice and of judgment. Of sin, because they believed not in Me: and of justice, because I go to the Father, and you shall see Me no longer: and of judgment, because the prince of this world is already judged. I have yet many things to say to you; but you cannot bear them now. But when He, the Spirit of truth, is come, He will teach you all truth. For He shall not speak of Himself: but what things soever He shall hear He shall speak, and the things that are to come, He shall show you. He shall glorify Me: because He shall receive of Mine and shall show it to you.&nbsp; Fourth Sunday After Easter

Of each of these Christ foretold them in his Sermon he made them the night before his death immediately after the institution of the blessed Sacrament of the Altar.  Of the first he said thus: a little, that is to say after a little while you shall not see me; of the second, I go to my Father; of the third, they shall expel you out of their Synagogues, & every one that killeth you shall think he doth God good service: & this he did that he might arm them aforehand to bear them the better when they came, for harms foreseen do hurt us so much the less.

To each of these corrosives Christ adjoined a comfortable cordial. When he had said of his death, after a little while you shall see me: When he said of his Ascension, I go to my Father, he adjoined, I will not leave you Orphans, I will send you the holy Ghost for your comforter, I go to prepare a place for you, in heaven. When he had told them of their troubles, and afflictions, he adjoined,but your sorrows shall be turned into joy & no man shall be able to take it from you, and I will come again unto you, to wit, at your several deaths, and take you to myself, to reign with me in my heavenly bliss forever.

This he did to comfort them that they might not be overmuch constrained and swallowed up with sorrow & grief; for immoderate grief besides the affliction thereof, (which we shall do well to mitigate in our selves, and others what we can) maketh us so dull and stupid that we are not able to exercise the offices, and functions neither of body or mind as we ought to do.

A notable example hereof, we have in the holy Scripture. Nadab and Abiu the sons of Aaron offering incense with profane fire, that is to say, with other fire then God commanded, & was still kept in the Temple, for that purpose; in revenge thereof, God caused the fire to flame so extremely that it burned both in their place. Aaron though a priest, and the high priest and a very holy man, took their death so heavily that being to offer sacrifice with divers ceremonies & rites belonging thereunto, was so oppressed with grief, that he could not do it with that dexterity and decency as he should and being blamed of Moses for it, he said thus: A sacrifice is offered today, and a holocaust before our Lord, and thou seest what happened unto me: how can I eat thereof,and please our Lord, in his ceremonies,with such sorrow and grief?

So here the disciples were so oppressed with grief for their Master going from them, and leaving them in so great troubles as he foretold should happen unto them, that like men amazed they had not so much heart, & counsaile, as to ask him whither he went, and Christ told them,he had many things to say unto them but they were not then in case to hear them, being too much oppressed with grief, and sorrow.

Nay immoderate grief even for our sins is not good.Let your service to God, sayeth St. Paul, be with reason and discretion: and the Prophet David sayeth thus unto us; Arise yee that eat the bread of sorrow after yee have sit down, (to wit:) in penance and sorrow for your sins: that is to say, when you have taken reasonable and moderate sorrow form them arise unto comfort, and not suffer yourselves to be overmuch oppressed and swallowed up with sorrow, that you may do your service to God, with more alacrity and vigour.

Here we may learn to tell others of their troubles and miseries to come, that they may the better avoid them, or bear them when they come although we know it will grieve them, & if it be for their sins, to do it of purpose to grieve them to penance as St. Paul was towards the Corinthians; but having grieved them with pre-admonishing them of their dangers,as Christ did his disciples,to comfort them again as he did them, and as St.Paul did a grievous sinner to whom he having enjoined a sharp penance, he released part thereof, least he should be swallowed up, as he said, with over great sorrow.
A Plaine Path-Way To Heaven By Fr.Thomas Hill 1634