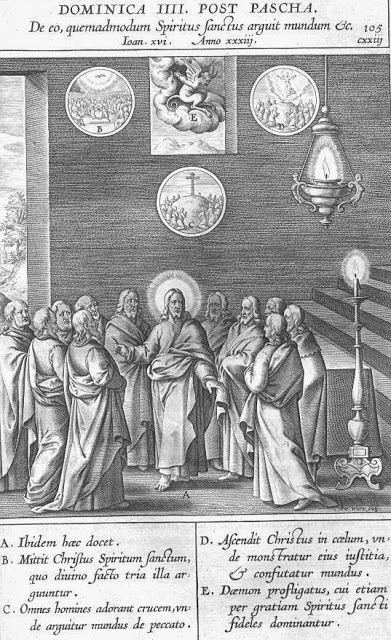 GOSPEL John 16. 5-14.
At that time Jesus said to His disciples: I go to Him that sent Me: and none of you asketh Me: Whither goest Thou? But because I have spoken these things to you, sorrow hath filled your heart. But I tell you the truth: it is expedient to you that I go: for if I go not, the Paraclete will not come to you: but if I go, I will send Him to you. And when He is come, He will convince the world of sin, and of justice and of judgment. Of sin, because they believed not in Me: and of justice, because I go to the Father, and you shall see Me no longer: and of judgment, because the prince of this world is already judged. I have yet many things to say to you; but you cannot bear them now. But when He, the Spirit of truth, is come, He will teach you all truth. For He shall not speak of Himself: but what things soever He shall hear He shall speak, and the things that are to come, He shall show you. He shall glorify Me: because He shall receive of Mine and shall show it to you.

These three Christ here teacheth his disciples. The first by his departure from them: the other two by bidding them stay in Jerusalem ten days, in prayer and other good exercises, till the coming of the holy Ghost, that thereby they might prepare themselves to receive the grace and gifts thereof.
A Plaine Path-Way To Heaven By Fr.Thomas Hill 1634