Hey Putin! All Your Superyachts Are Belong To Us ~ Signed Rome..... 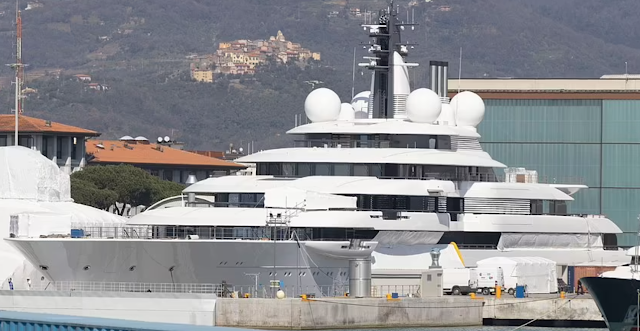 Scheherazade is mine....
Giant £570 million superyacht 'owned by Vladimir Putin' is seized by Italian authorities as part of sanctions against Russia over invasion of Ukraine
A giant superyacht said to be owned by Vladimir Putin was last night set to be seized by Italian authorities after they recommended it be impounded as part of sanctions against Russia. Authorities in Italy said the $700 million The Scheherazade, which is more than 450ft long, and boasts spas, swimming pools and two helicopter pads was connected to a 'significant person' but did not name them. The yacht has been the subject of an investigation by the Italian financial police since the end of March and has been in dock at Marina di Carrara near Pisa since September undergoing a refit. The late night announcement came after fears grew that The Scheherazde was about to slip away and head to international waters and avoid any possible sanctions. In recent days there has been a flurry of activity around the yacht and when MailOnline visited in March it emerged that the majority of the Russian crew had been spirited away in the middle of the night and replaced by a British contingent. A statement from the Italian Financial Police said: 'After verification by the fiscal authorities it has come to light that there is a significant economic connection between the owner of The Scheherazade and senior elements of the Russian government. 'On the basis of these elements it has been recommended that the yacht be placed on the current European Union sanctions list and the Minister of Finance in Rome has agreed.' Source
Hey Putin here is music to weep by..
Email Post