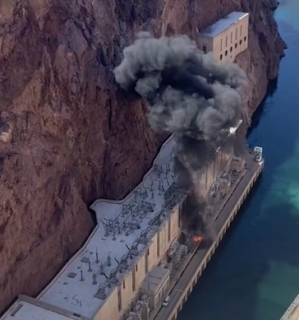 Horror scenes as explosion rocks Hoover Dam – enormous black smoke cloud stops tour
PLUMES OF SMOKE can be seen in footage circulating on social media after an apparent explosion at the Hoover Dam in the Black Canyon of the Colorado River.The incident happened just after 10am local time when visitors at the dam reported seeing an explosion, fire and smoke at the base of the dam. The City of Boulder said in a statement: "Boulder City Fire Department is en route to an emergency call at Hoover Dam. "No further information is available at this time."Built nearly a century ago — construction began in 1931 as the US was withering under the Great Depression — the Hoover Dam was designed to provide irrigation water and hydroelectric power, as well as to control seasonal flooding of the Colorado River, which made downstream settlement possible. Source