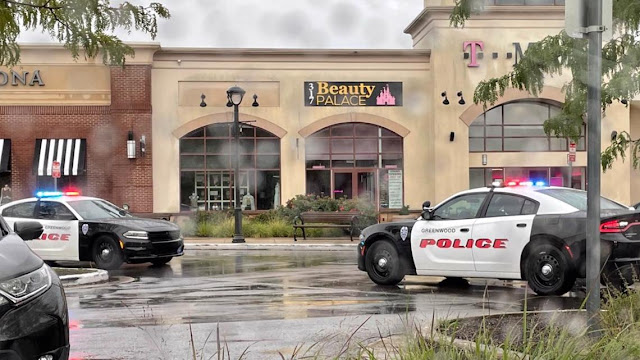 At least 2 dead in shooting at Greenwood Park Mall
GREENWOOD, Ind. — At least 2 people are dead and 2 more are injured after a shooting Sunday at the Greenwood Park Mall. Both law enforcement officials and witnesses on the scene confirm to FOX59 that at least 2 people were killed in the shooting inside the mall and that multiple more were injured. The mall has a heavy police presence of both Greenwood and Indianapolis Metropolitan Police Department officers outside of the Dick’s Sporting Goods. Source
4 dead, 2 wounded in shooting at Greenwood Park Mall; Good Samaritan shot and killed shooter GREENWOOD, Ind. — Police are investigating a shooting at Greenwood Park Mall that happened around 6 p.m. Sunday. Four people are dead and two others wounded in the shooting. Police tell 13News the shooter is among those dead. Greenwood Chief James Ison said two others were wounded in the shooting and are being treated at area hospitals.Ison said a good Samaritan witnessed the shooting and shot and killed the shooter. The shooter is only identified as an adult male at this time. Police said the shooter had a long rifle and several magazines of ammo. People inside the mall at the time of the shooting told 13News reporter Logan Gay that they heard 20 gunshots in the food court. IMPD said it appears shots were only fired in the food court area.IMPD is assisting at the scene and said there is no known ongoing threat, during a news conference at 7:45 p.m. Multiple police units are going through the mall to make sure there are no people wounded or still sheltering in place. Source

IMPD is assisting with an incident at the Greenwood Park Mall. Please avoid the area. Greenwood Police Department is the lead agency. Please avoid sharing misinformation on social media until they confirm details. pic.twitter.com/uttgroT809