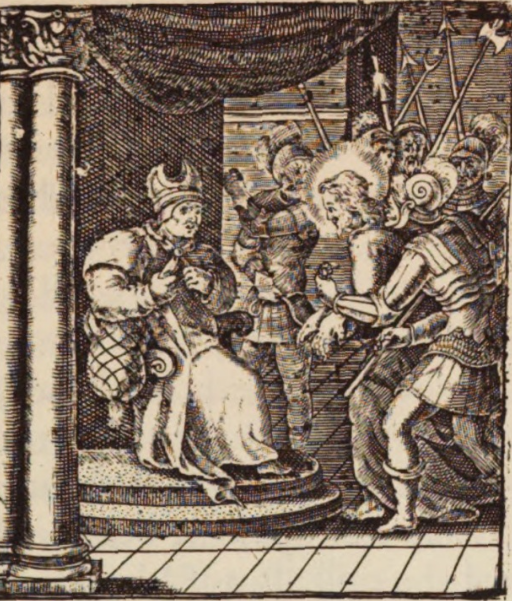 When our Savior was brought before Annas the high priest, he demanded him of his Disciples, and of his doctrine. Jesus answered him, and ſaid: I spake openly to the world, I ever taught openly in the synagogue, and in the temple, whither all the Jews resort continually, and in secrete have I ſaid nothing why asks thou me? Ask them that heard me, what I said unto them. when he had ſpoken theſe words, one of the officers, that stood by, smote Jesus with his hand, saying, Answer thou thus the high priest: Jesus anſwered him. If I have evil spoken, beare witness of the evil: But if I have well spoken, why smite thou me.
And Annas sent him bound unto Caiphas,where the doctors of the law, and the ancients of the people were gathered together. And the high priest, and the Scribes, and the whole councell, sought for false witness againſt Jesus, to put him to death, but fown-ºvenſdale morning. fownde none, thowghe many false witneſſes came thither, but their witness agreed not together. But at the last, came two false witnesses, and ſaid. This man said. I can destroy the temple of God, and build it up again in three days. Then the chief priest arose, and said to him: I conjure thee, in the name of the living God, that thou tell us, whither thou be Christ the son of God. Jesus said to him. Thou hast said it. Nevertheless I say unto you. Hereafter shall ye see the son of man sitting at the right hand of the power of God, and come in the clouds of the heaven. Then the high priest rent his clothes, saying: He hath blasphemed, what need we any more witneſſes: Behold, ye have now heard his blaspheme. what think ye. They answered, and said, he is worthy to die. Then spat they in his face, and buffeted him, and others gave him blows on his face, saying.  Areede O Christ, who is he, that smote thee.
The next day in the morning, the whole multitude of them aroſe, and led our ſauiour vnto Pilate. And they beganne to ac- cuſe him, ſayinge: we haue fown- de this man peruertinge the peo- ple, and forbiddinge to paie tri- bute to Caſar:ſayinge: that he is the kinge Meſfias. And Pilatcaſ. ked him, ſayinge: Art thou the kinge of the Iewes? And he an- ſvered him, and ſaid: Thou ſaicſt it. And when he was accuſed of the cheife preiſtes, and elders, he anſwered nothinge. Then ſaid Pi— late Wenſdaie morninge. 65 late vnto him. Heareſt thou not, how manie thinges they laie a- gainſt thee? But fie anſwered him not to one worde, inſomuch that the preſident meruailed greatly, Then ſaid Pilate to the highe prei- ſtes, and to the people. I finde no fault in this man. But they were more fierce, ſayeingc: He moueth the people, teachinge throwghout all Iudea, beginninge at Galilee cuen to this place. -
Now when Pilate heard of Ga-" lilee, he aſked whether the man were of Galilee borne. And when he knewe he was of Herodes iuriſ- dićtion, he ſent him to Herode, who was alſo at Ieruſalem in tho- ſe daics. And when Herode ſawe Ieſus, he was exceidinglie gladde. For he was deſirous to ſee him of a longe ſeaſon, becauſe he had - I Meditation for Maih.17. hearde manie thinges of him, and truſted to haue ſeene ſome ſigne done by him. The highe Preiſtes and thc Scribes ſtoode forthe,and accuſed him vehementlie. And Herode with his men of Warre contemned and mocked him, and put a white garmente vpon him, and ſent him againc to Pilate.
And by reaſon of the ſolem- nitie of the feaſte of Eaſter, the preſident was wonte then of cu- ſtome to deliuer vnto the people a priſoner, whom they !. demaunde. And there was at that time a notable malefactor in pri- ſon, called Barrabas. When they were then gathered altogether, Pilate ſaied vnto them: Whether of the two will ye that I let loſe wnto you, Barrabas, or Ieſus, that is called Chriſte:And they anſwe- red: Wenſdaie morninge. 66 red: Not this man, but Barrabas. ..., This Barrabas was caſt into priſon " for a certaine inſurrection, and murder, committed in the cittie. Then ſaid Pilate vnto them:What ſhall I doc then with Ieſus, that is called Chriſt. They cried Maihaº. all: let him be cruci- fied. Then Pilate tooke Ieſus, and ſcour- ged him.
Email Post