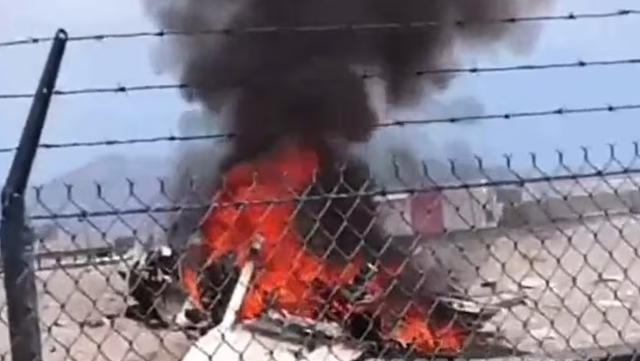 Four dead after two single-engine planes collide MID-AIR at North Las Vegas Airport: No one on board either craft survived after Piper aircraft landed in a field and Cessna fell into water retention pond
A midair collision over North Las Vegas Airport has left four dead, police say, after two aircraft inexplicably collided leaving no survivors. The crash occurred at approximately noon Sunday, after two single-engine aircraft - each carrying two people - collided over an active runway. One of the aircraft crashed in a field east of the runway - with the other falling into a water retention pond. Officials say that one of the planes had been preparing to land when it struck by the other aircraft at high speeds, causing both to burst into flames. Footage circulating online shows the mangled remains of one of the planes smoldering on the sun-scorched tarmac, and a thick plume of smoke billowing up into the sky. The victims in the tragedy have yet to be named - but at least two of them had been piloting the small, personal aircrafts: a single-engine Piper PA-46 and a single-engine Cessna 172. Police Sunday confirmed the fatalities, and say that the accident is currently under investigation by the Federal Aviation Administration (FAA) and the National Transportation Safety Board. North Las Vegas police confirmed the crash to DailyMail.com Sunday, saying there had been 'multiple fatalities' as a result of the collision. 'I can confirm that two planes have crashed resulting in multiple fatalities,' NLVPD Public Information Officer Alexander Cuevas said of the incident, adding that the department has since handed the investigation to federal officials. 'The NTSB and the FAA have taken over control of the investigation,' the officer said. 'We are assisting where requested.' The FAA also confirmed the midair collision Sunday in a statement, which revealed that each plane had been carrying two passengers at the time of the crash. Source